By all accounts, the exoplanet known as WASP-19b is a pretty inhospitable place. As one of the closest known hot-Jupiters to its star—orbiting just two per cent of the distance between the Earth and the Sun—it’s home to a scorchingly hot, violent atmosphere. The side of the planet which always faces the star churns with massive convection currents, dredging up heavier molecules from the planet’s lower layers.

Unsuitable for life as it may be, WASP-19b’s proximity to its star happened to make it a perfect candidate for atmospheric observation. A paper published Wednesday in the journal Nature has found the very first evidence of titanium oxide on any known exoplanet, in the upper atmosphere of WASP-19b. And that’s significant for a number of reasons.

“We will be able to constrain models and understand the structure of these atmospheres [and] where they were formed,” Elyar Sedaghati, European Southern Observatory astronomer and co-author of the study, told Gizmodo. “Because if we know what’s in the atmosphere, we can turn the clock back a little bit.”

“This is an outstanding achievement from a ground-based telescope and nature delivered us a fantastic hot planet atmosphere.”

WASP-19 is a pretty average star about 815 light years away from us, located in the Vela constellation. Its only known planet, WASP-19b, was detected by the Wide Angle Search for Planets in 2009, and it only takes three quarters of a day to orbit its star. That proximity made it a perfect target for a spunky little spectrograph called FORS2 (FOcal Reducer and low dispersion Spectrograph), which was originally installed to the Very Large Telescope in Chile in 1999, almost 20 years ago. But there was work to do before observations could begin.

“[The instrument] had to be upgraded,” said Sedaghati. “All that meant was basically replacing these two prisms that correct for some atmospheric distortions as the star goes near the horizon. These were causing some issues in the exoplanet observations that we were doing with this. So, in November 2014 we made the exchange.” He also hopes with these initial promising results, they go back and do even more improvements on the venerable device. 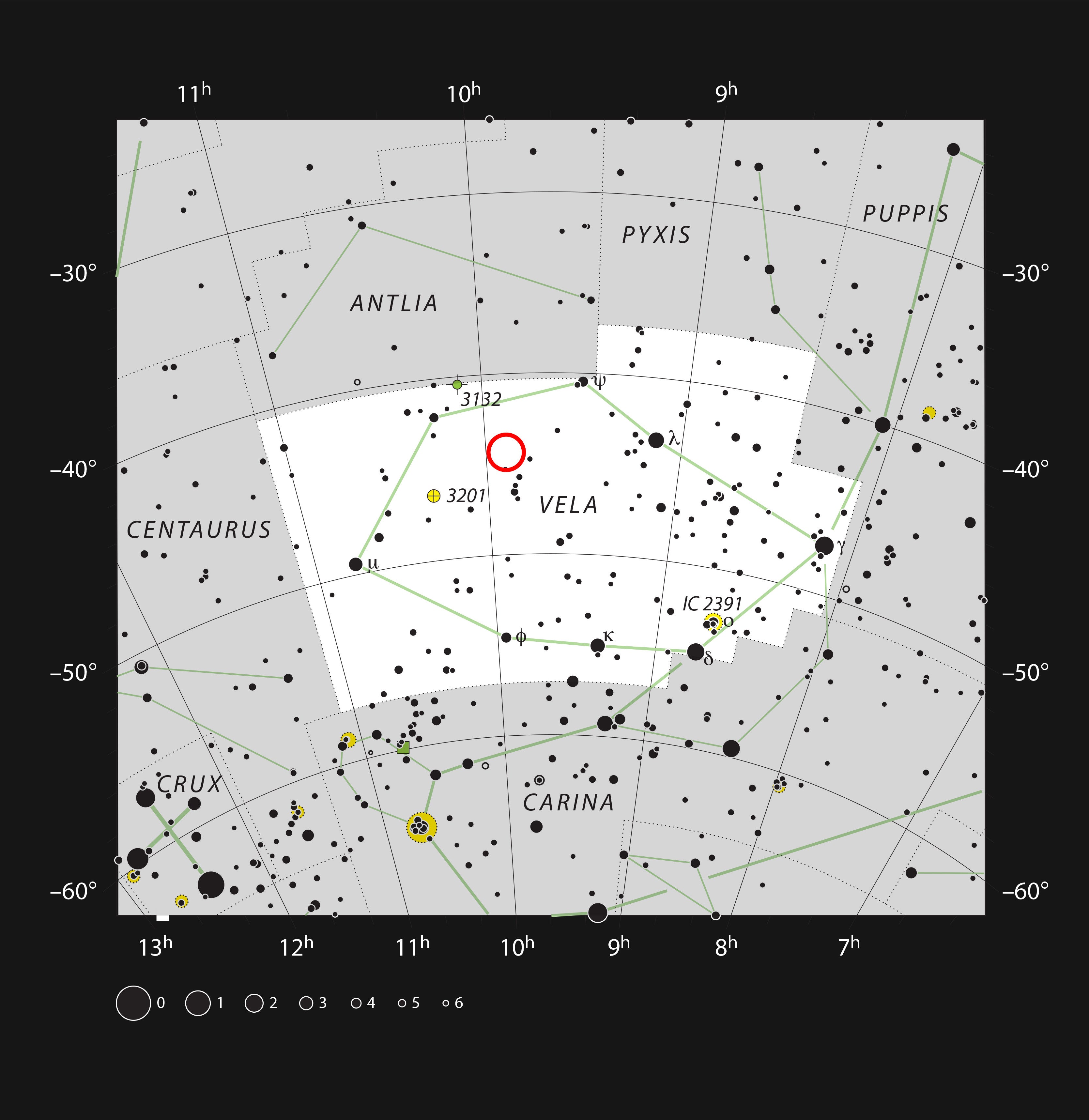 If you want to check on WASP-19b yourself, start here in the Vela constellation (Image: ESO education and Public Outreach)

The researchers began peering at WASP-19b around that time, and they got some intriguing data in something called a light curve, which is the measure of how much the light dims when a planet transits a star. Spectrographs work by observing the light emitted by an object and breaking it into its spectra, much like when you shine white light through a prism and it turns into a rainbow. Using this data, you can determine what kind of chemicals are present in whatever the light is shining through. Because this particular planet is so close to its star, the researchers could see the spectra of its ferociously roiling atmosphere, which extends way further into space than, say, the atmosphere of a more distant gas giant like Jupiter does.

Getting better at decoding the atmospheres of exoplanets, even inhospitable ones like WASP-19b, will contribute to the holy grail of exoplanet research: hunting for signs of life. “Methane — that could be in combination with other molecules, a sign of life — will have very similar absorption features with titanium oxide. This basically gives us hope for future observations for example with the James Webb Telescope,” said Sedaghati.

There are still a lot of steps before that moment, as the JWST won’t launch until the latter half of 2018, and then will need to time scan the skies. But these WASP-19b results are nonetheless encouraging.

“It’s a very nice result,” said Sara Seager, a professor of planetary sciences and physics at MIT, in an email. “I can say this is an outstanding achievement from a ground-based telescope and nature delivered us a fantastic hot planet atmosphere. So far, too many planets are literally 'clouded out' and we can’t observe any spectral features. [Titanium Oxide] seems obscure, but is actually a very strong absorber—kind of like a skunk smell, only a tiny amount can make a difference.”

Seager says planets like WASP-19b have a “treasure trove” of features which are really useful to observe.

“It will take a lot of time for the field to settle out, to correct itself. It will be exciting, but not clear-cut in the first findings."

Jonathan Fortney, an expert in exoplanet atmospheres at University of California Santa Cruz, actually predicted that metal oxides would be present in nearby hot-Jupiters. But he admits discoveries in the field will be slow for now because most “general use” instruments can’t pick up the level of detail required for terrestrial exoplanetary atmospheric analysis. Even though the FORS2 tool has been really successful in this project, it was installed before we had even discovered exoplanets using the transit method.

“To me this shows that understanding exoplanet atmospheres is an extremely challenging observational field,” he said. “We must be thoughtful in how we design instruments to detect and understand exoplanet atmospheres. And we must be patient. I really think that this long time lag will be repeated, likely on an even longer time scale, for the atmospheres of temperate terrestrial planets.”

As the study of exoplanet atmospheres continues, be prepared to see stories of successful characterisation where the evidence is a little sketchy, Fortney warns.

Bryson is a freelance storyteller who wants to explore the universe with you.