By analysing the bones of a small, feathered dinosaur known as Sinosauropteryx, palaeontologists have mapped its unique colour patterning. Incredibly, this creature featured a bandit mask-like stripe across its eyes, similar to some mammals and birds living today.

Sinosauropteryx (pronounced “Sine-oh-sore-op-tear-icks”) was first discovered in China in 1996, and it was the first dinosaur (outside of ancient birds and their immediate relatives) to be found with evidence of feathers. A new study published in Current Biology shows that it exhibited multiple forms of camouflage, including countershading (light bottom, dark top), a distinctive striped tail, and a so-called bandit’s mask—the same kind seen in modern animals such as raccoons and skunks. The discovery shows that, unsurprisingly, dinosaurs evolved sophisticated schemes to camouflage themselves (which also implies they had good vision), and that, because similar camo schemes exist today, dinosaurs must have lived in environments similar to ones we see today.

“Dinosaurs are fascinating beasts and filled up a lot of niches and modes of life that are now occupied by mammals and living birds,” Jakob Vinther, co-author of the new study, told Gizmodo. “We can show that they looked much like living animals because the lives they lived aren’t much different from living ones.”

Indeed, if there was ever an animal that needed camouflage it was the dinosaur. Sinosauropteryx, which lived around 120 million years ago in what is now China, was a relatively small animal that lived in world filled with fearsome predators—including relatives of the Tyrannosaurus rex. At the same time, camouflage also allowed Sinosauropteryx to sneak up on unsuspecting prey, like small lizards. 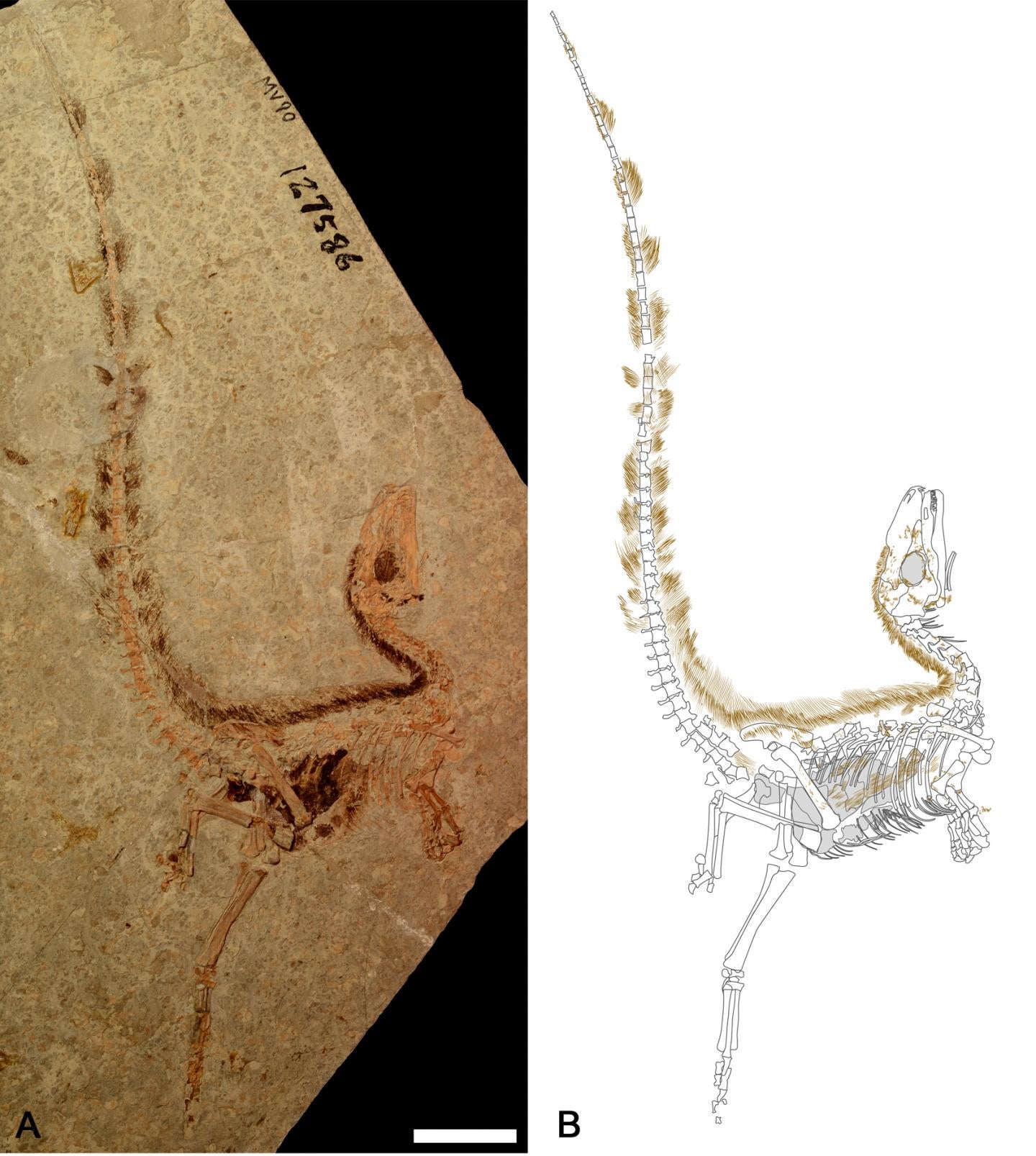 A fossil of Sinosauropteryx used in the study. (Image: University of Bristol)

Using polarised light photography, researchers from the University of Bristol produced high resolution and contrast-rich images of Sinosauropteryx fossils. Fossilised feathers only preserve when they’re pigmented, so by mapping the presence and absence of feathers, the scientists were able to tease out its colour patterns. Previous to this work, palaeontologists looked at a different specimen, detecting small and round melanosomes (light-absorbing pigments found in skin and feathers) indicative of brown colouration.

“The bandit mask was surely the most fascinating discovery,” said Vinther. “It’s very common in living animals. The exact function is up to debate, but now we can show that dinosaurs also had this pattern.”

The bandit’s mask likely provided varied function, including reduction of glare or as a way to disguise eyes from predators. 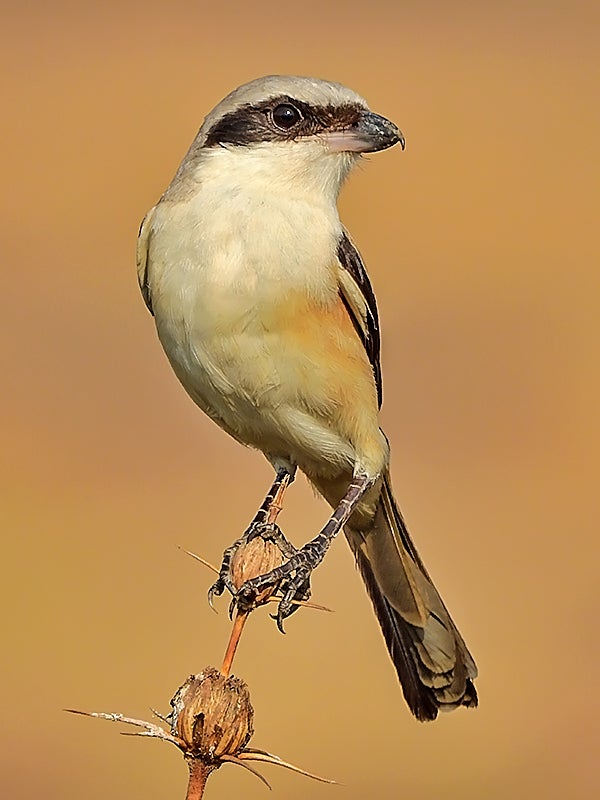 “In mammals bandit masks are commonly seen in mid-sized predators and serve as warning colouration (skunk, badgers) warning larger predators that they will give up a fight, or smell,” said Vinther. “However, we think that the function in birds is more likely to be the best comparison for this dinosaur.”

Scientists hypothesise that the facial mask of shrikes, a small bird, allows them to hunt into the sun, which helps them detect prey and engage in surprise attacks. Other living birds with dark bandit eyes include the blue dacnis, masked laughingthrush, and nuthatches.

The researchers also detected the presence of a striped tail and a very common form of camo known as countershading. With countershading, an animal features a dark back and a light belly, which makes them look flatter and less three-dimensional. Camouflaged this way, animals don’t stand out as much against the backdrop. Animals feature varying degrees of countershading depending on their habitat, and Sinosauropteryx’s particular pattern of countershading suggests it lived in open habitats, like a plain or great meadow. Last year, the same researchers studied another dinosaur found in the same ancient lake bed deposit, but its countershading suggested it lived in a forest.

“So these two dinosaurs did not necessarily interact much with each other or at all,” said Vinther. “This means that we can now paint a more vivid picture of the landscape and habitats these dinosaurs lived in around these lake beds they are found in.” [Current Biology]