The first reports of Luckey’s plans post Facebook-ouster revealed that the young millionaire was starting a defense-tech company to help build a virtual wall that would keep people from crossing the US-Mexico border with the aid of sensors and drones.

Now, Luckey’s company Anduril Industries (presumably named after a Lord of the Rings sword, known as “the flame of the West”) has posted new information on its site, which reveals a peek at Luckey’s plans, as TechCrunch reports.

The Anduril site suggests it will help military tech catch up with the rest of Silicon Valley, because “progress in defense has lagged since the end of the Cold War.” Its mission:

Anduril is privately funding and building products that America and her allies desperately need: real-time battlefield awareness for soldiers on the ground and headquarters alike, technology that keeps our men and women on the front line out of harm’s way, and a host of other technologies that will ensure we are staying ahead of our adversaries.

Anduril also suggests that it will help disrupt the military-industrial complex:

The central fallacy of the political debate surrounding defense spending is that we are stuck in a dichotomy between doing “more with more” or “less with less”. This is a false choice: if we build the right technology, we should be able to do more with less. As a product-focused company that funds and builds our own technology, we are not beholden to the typical cost-plus contract structure, which rewards slow and expensive development of bespoke technology. 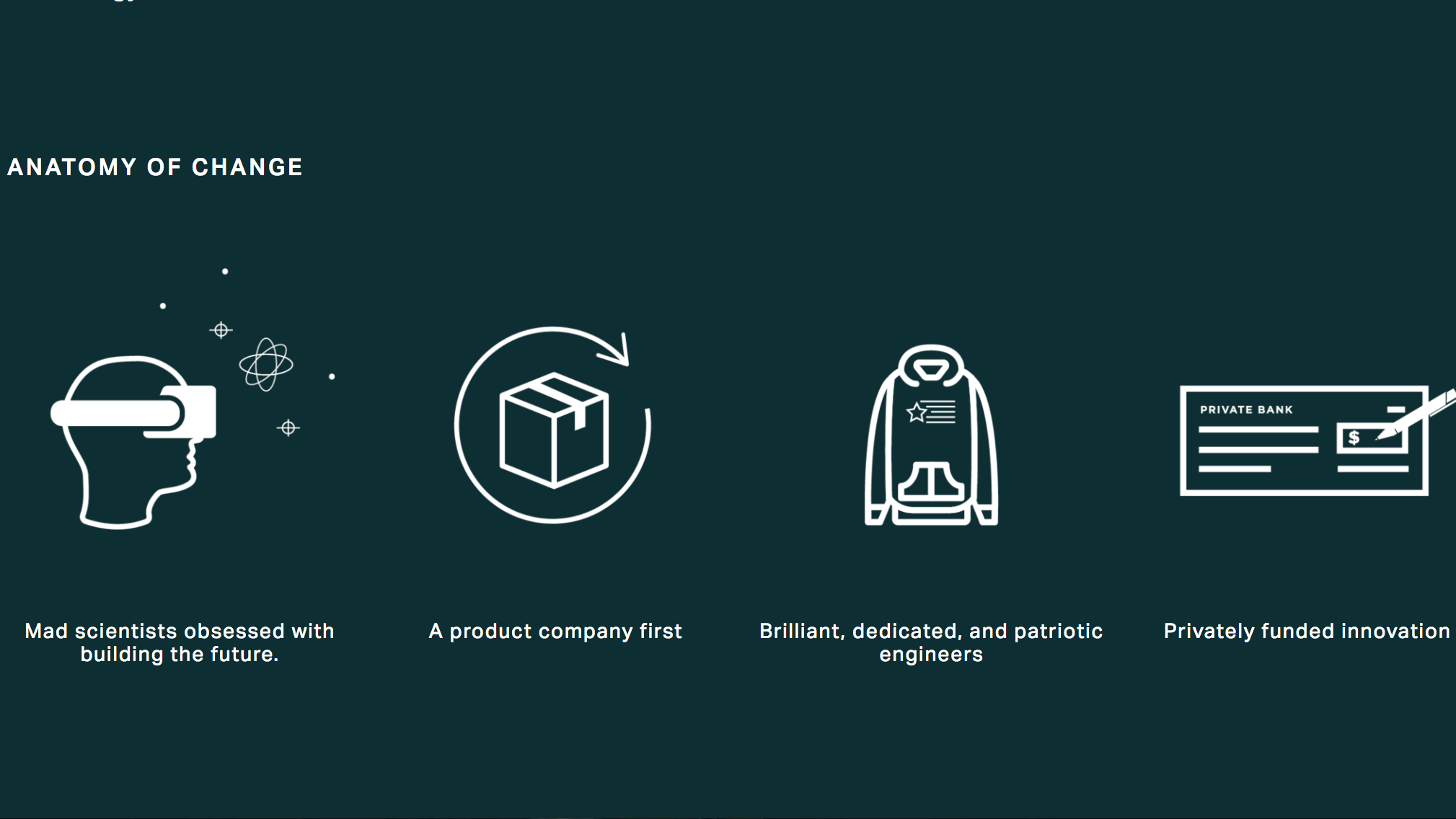 An illustrated explainer demonstrating four parts of the company’s “anatomy of change” shows an icon of a “mad scientist” head with a VR headset, as well as an icon of a hoodie (the sartorial symbol of coding) with a simplified American flag above the words, “Brilliant, dedicated, and patriotic engineers.” It’s subtler than a poster of Pepe the Frog dressed as Uncle Sam pointing at nationalist programmers, but it still gets the message across. 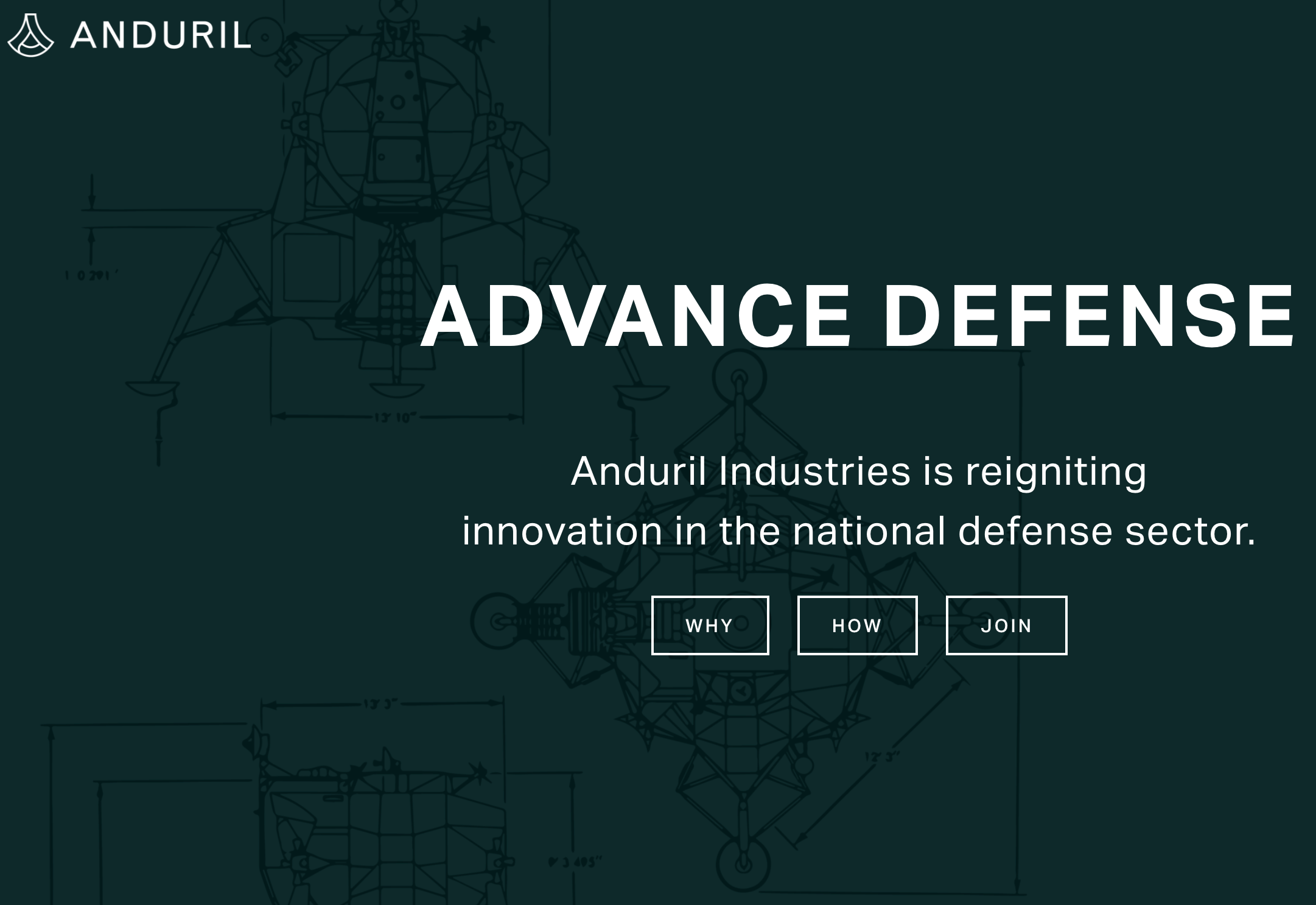 Anduril is comprised of engineers who previously worked at Oculus and Palantir Technologies—a data-mining and surveillance company with many government agency clients. Anduril co-founder Trae Stephens was previously a Palantir engineer and is a partner at Founders Fund, the investment firm of Palantir co-founder Peter Thiel. President Donald Trump picked Stephens to assist with the transition of the Defense Department.

Anduril chief executive Brian W. Schimpf and chief operative officer Matthew M. Grimm also both previously worked at Palantir. According to early reports from The New York Times, Founders Fund planned to invest in Anduril and “sees Mr. Luckey’s venture in the mould of Palantir Technologies, a data-mining company co-founded by Mr Thiel, which serves a wide range of clients, including intelligence agencies.” (Palantir is also a Tolkien reference for a magical crystal ball that allows communication to distant lands and other eras.)

In addition to Middle-earth references and defense contracts, Thiel and Luckey seem to align politically. Thiel is an advisor to Trump, and Luckey’s departure from Facebook stemmed from reports that he funded a pro-Trump shitposter meme-battle group.

TechCrunch asserts that Anduril will likely focus on VR and AR because the company employs former Oculus staffers. TechCrunch also reports that a source who spoke with Luckey told the outlet that Palmer wants to find ways to use AR for defense.

There’s no telling what other creepy, sci-fi technology Luckey is looking to introduce to the battlefields. An Anduril job posting shows the company is recruiting engineers with experience in computer vision, sensors, lidar, radar, aeronautics, automation, and robotics. In an interview last May with MoguraVR, Luckey said he is “trying to once more change VR,” but also expressed interest in technology that connects directly to the brain.

Anduril and Founders Fund did not respond to Gizmodo’s request for a comment. [TechCrunch] [Anduril]

Can Facebook Fix VR’s Most Frustrating Problems in One Fell Swoop?

ZeniMax is Going After Samsung Now