Luck doesn’t strike daily. Sometimes you lose your wallet, trip up the stairs, get into a car accident, or drop your iPhone and crack the screen. But sometimes you get lucky. You win a fiver on a scratch card. You find out that your young nephew, not your dog, ate the dark chocolate bar whose wrapper is sitting on your floor. And sometimes, you find frog bones inside your extinct mummified salamander.

Scientists in Europe were analysing an already well-preserved 34- to 40-million-year-old French salamander fossil, as you do, when they found something even stranger: preserved organs, including a lung, a spinal cord, muscles, and genitals, and frog bones in the digestive tract. Not only were these some of the oldest preservations of these organs in vertebrates, according to the paper published recently in PeerJ, but a salamander eating a frog is rare in its own right.

This “represents the only known case of an extinct salamander that fed on a frog,” the researchers write. 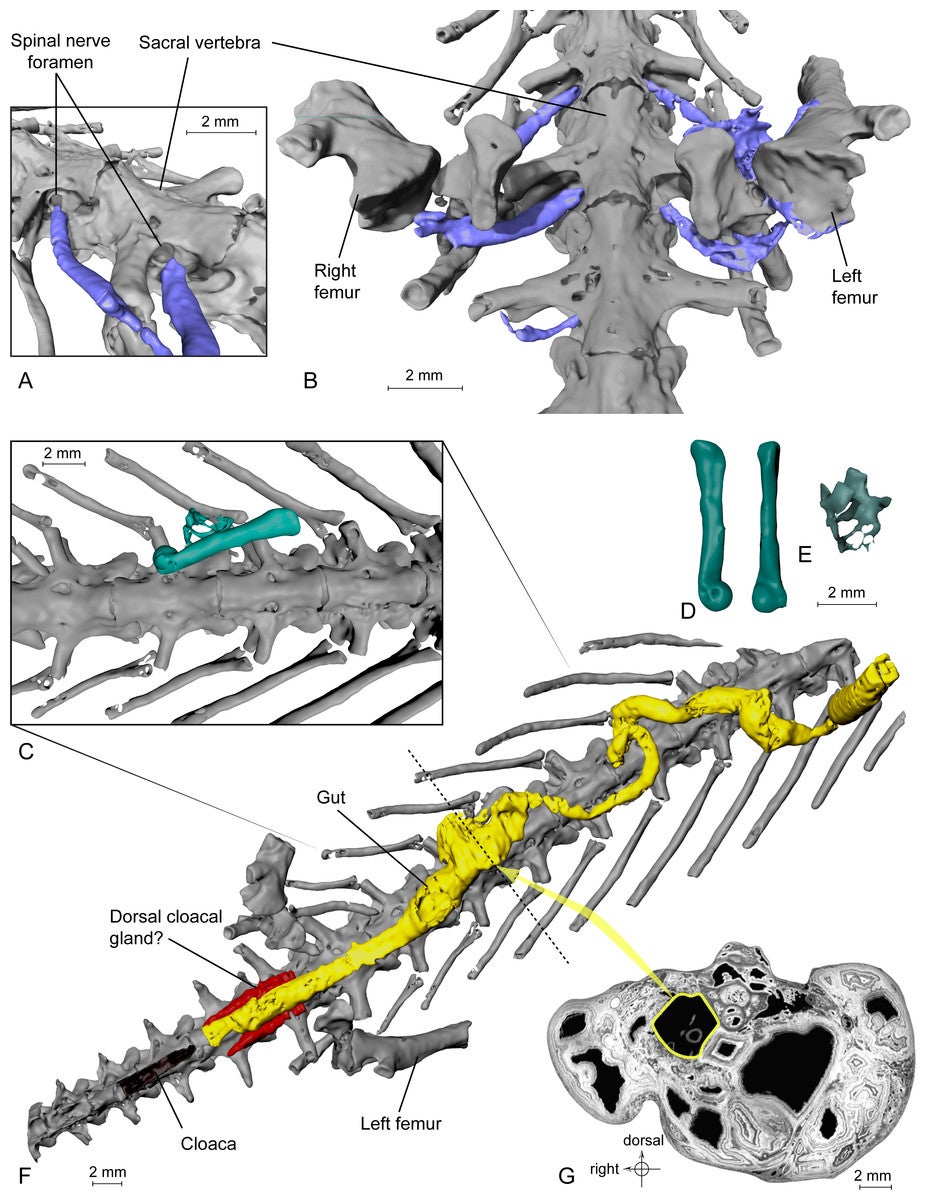 X-ray scans of the salamander mummy. The frog bones are in green. (Tisser et al, PeerJ (2017))

The fossil came from a specific area in France, which due to its geography—including cracks filled with sediment—has lots of ancient bones and in some cases entire animals whose insides have been replaced with mineral, turning them to rock mummies. Scientists previously only studied these animals’ outsides.

Modern technology has changed that. For the most recent study, the researchers blasted the mineralised salamander mummy with x-ray radiation from the European Synchrotron Radiation Facility in France, a particle accelerator that bends electrons to create high-energy light. The scans revealed the organs and meal inside.

The researchers noted that they couldn’t get the exact year of their specimen, and had to infer based on indirect means. Even still, these salamander organs and frog parts are likely some of the oldest organs preserved in three dimensions in any fossilised vertebrate sample, which is pretty nuts.

Ultimately the research is mainly cool, and might help those studying ancient salamanders and newts in the future. But just know that if you fall into a chasm and get mineralised by the sands of time, some future being might be able to tell what you ate for lunch. [PeerJ]