The Earth happens to be located in one of the weirdest places imaginable: the Universe. Like, whatever this Universe is and whatever rules it follows, we puny humans still struggle to understand it. But we’re really trying to—and we can’t seem to agree.

China’s Dark Matter Particle Explorer satellite (DAMPE or “Wukong” in China) is reporting the results of a year-and-a-half of space-staring, measuring the mysterious, high-energy electrons blasting Earth from space. The experiment has directly detected something that some similar experiments have hinted at, but others haven’t: a sudden drop-off in the electrons hitting the satellite. Whatever is going on, it’s weird.

This change, called a spectral break, “confirms the evidence found by previous indirect measurements,” and “clarifies the behavior” of the high energy electrons, according to the paper published yesterday in Nature.

Science writes that the experiment is important as “China’s first mission dedicated to astrophysics” and “shows that the country is set to become a force in space science,” paraphrasing Physicist David Spergel at Princeton. 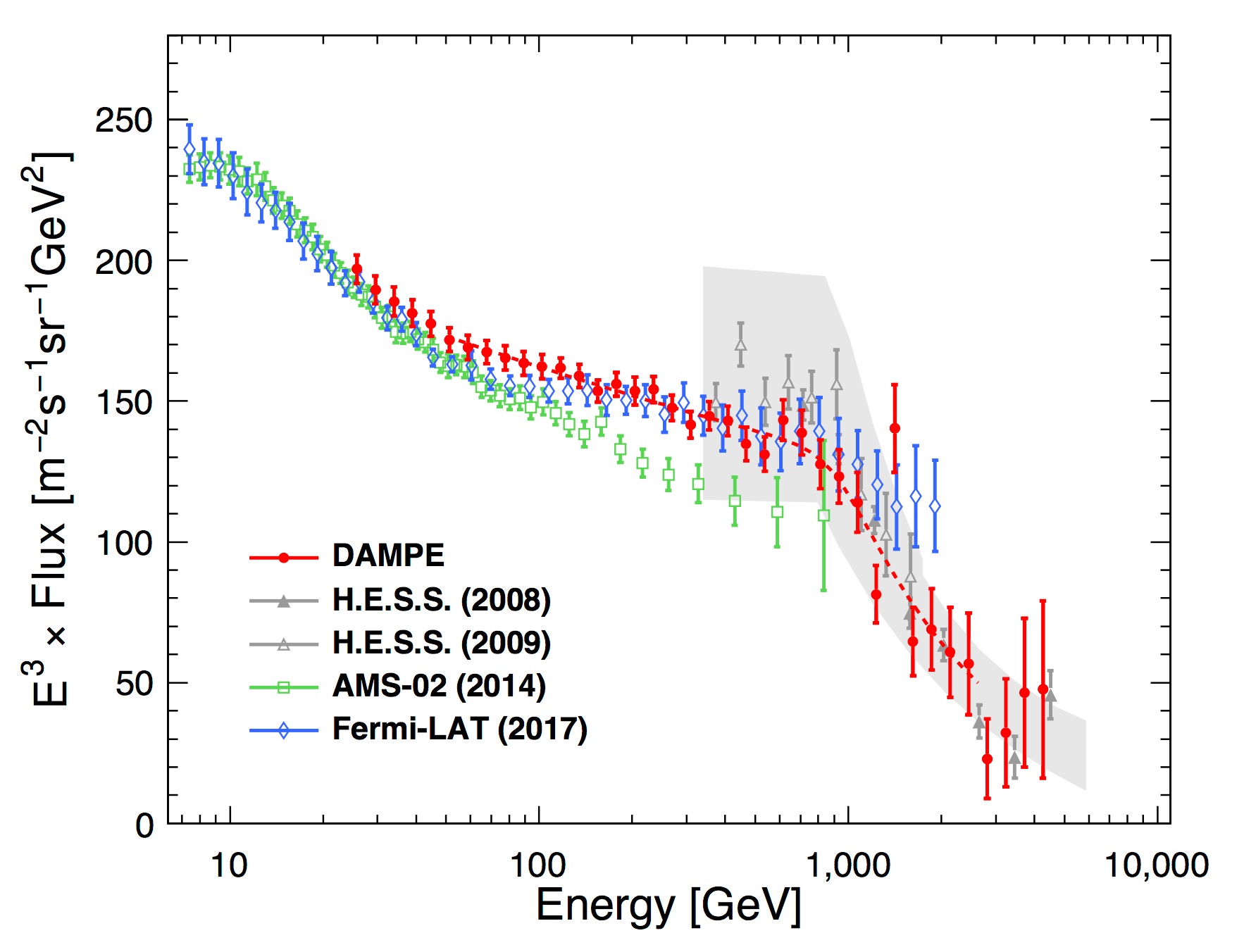 The drop is formed by the red circles. Image: DAMPE Collaboration (via the arXiv)

DAMPE counts the electrons and their antiparticles, postirons, hitting Earth from space. If you peep a graph of the number of electrons hitting the satellite versus their energy, the quantity decreases as the energy increases. But starting around 0.9 tera-electron volt (TeV) electrons, those that have almost two million times the energy of everyday, lowest-energy electrons, DAMPE spotted hints of a mysterious drop-off. This “edge-like” change could possibly be the result of nearby pulsars or even dark matter.

But is this apparent edge real? It’s hard to say. Physicist Wim de Boer from the Karlsruhe Institute for Technology in Germany noted that the Calorimetric Electron Telescope (CALET) on the International Space Station doesn’t seem to observe this edge at high energy, nor does the experiment de Boer works on, the Alpha Magnetic Spectrometer, also on the ISS. But Spergel told Gizmodo the uncertainties in all of these experiments are too large to say anything conclusive.

There simply isn’t a lot of data for the electrons with the highest energies, and a lot of places where the experiments differ in the way they analyse the data or potential sources for error. As always, more data will lead to a better understanding of the situation.

As to whether there are hints of dark matter afoot, “I don’t think dark matter should be at these high energies,” or at least, that’s the popular belief, said De Boer—and for now, he doesn’t know how to interpret the break. But more in-depth analyses of the specific types of particles, like electrons versus their antiparticles, positrons, could also help tease out the details of the story.

We have many experiments in which scientists can’t agree on what they’re seeing within all that strange stuff hitting Earth from outer space—or even if they have enough data to disagree. But there’s still hope that some explanation for “dark matter,” whatever it may be, is out there. [Nature]

Dark Matter Is Not Dead

What Kind of Sorcery Lets People Swim In This Sand-Filled Hot Tub?