Marine biologists working off the northwest coast of Australia have observed a rare mating display in which male dolphins were seen gathering and offering large marine sponges to females. Scientists have never seen this behaviour in dolphins before, highlighting a previously unknown level of social complexity.

Sexual displays are common throughout the animal kingdom, but displays accompanied by objects, or gifts, are actually quite rare. It’s a behaviour often seen in some birds, but in mammals it’s practically nonexistent outside of humans. New research published in Scientific Reports shows that another mammal, the Australian humpback dolphin (Sousa sahulensis), also participates in these ornamental mating rituals. But as to whether the female dolphins are actually impressed or persuaded by these behaviours, that remains unanswered.

A team from the University of Western Australia is the first to document this display in dolphins. The new study is based on ten years of observations, which the researchers did by watching multiple groups of dolphins that were geographically dispersed along coastal northwestern Australia. 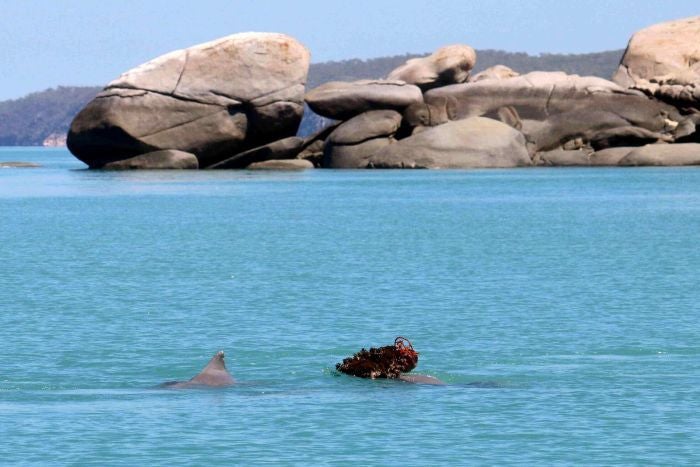 A male presenting a sponge to a female. (Image: Josh Smith/UWA)

Male dolphins (and birds, and humans for that matter) offer gifts as a form of peacocking. It’s a superfluous activity that’s completely outside the needs of day-to-day survival, so it serves as a conspicuous display of a male’s abundant physical and cognitive resources. And indeed, the collecting of large marine sponges from the seafloor is not as easy as it sounds.

These sponges are firmly attached to hard surfaces, requiring great strength and agility to remove (keep in mind that dolphins don’t have fingers). Complicating matters is the fact that these sponges are not helpless—they spew a chemical defense to prevent overgrowth and predation. The dolphins, therefore, are likely having to endure some toxic discomfort when extracting the sponges. This activity also requires some intelligence, which could be another sign of sexual fitness. Importantly, only males were observed to collect and present the sponges, and they only did so in the presence of sexually mature females. 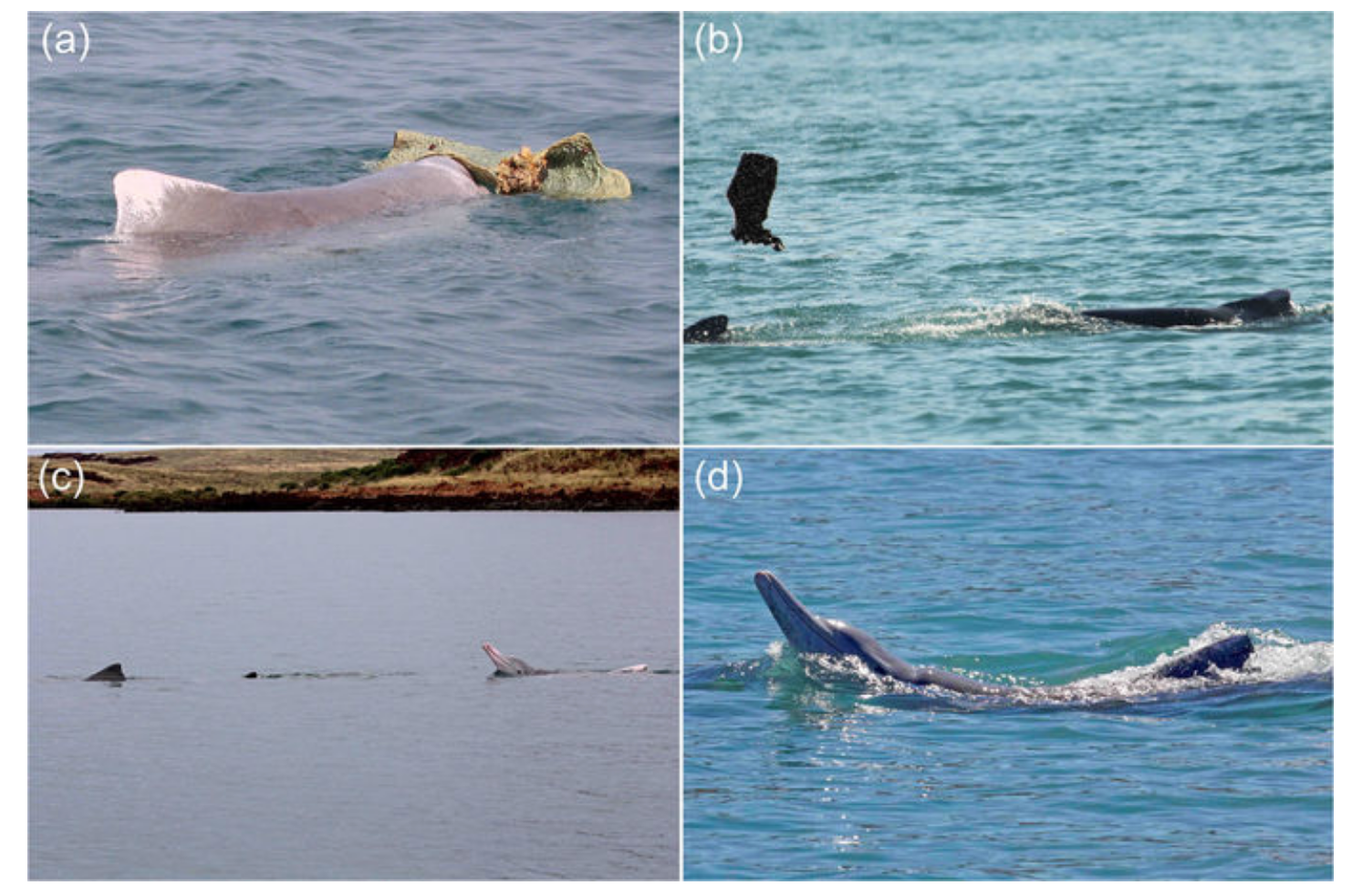 (a) Adult male humpback dolphin presenting a large sponge in the vicinity of a female, (b) a male tossing a sponge towards an adult female, (c) and (d) males performing the banana pose. (Image: S. J. Allen et al., 2017)

“It could be gift-giving in the sense that humans do it—diamond rings [and] roses and the like—in order to impress a female or to suggest that he is somebody that would be a really wise idea to mate with,” Simon Allen, the study’s lead researcher, told ABC News in Australia. “It appears the females tend to be ignoring the male and then it kind of ramps up to the point where he’s a bit frustrated and he tosses the sponge in the direction of the female.”

During the displays, the males were also seen making a physical posture called a “banana pose” and producing a “trumpeting” sound from their blowholes. The whole thing is quite the production.

The first time this behavior was seen, the scientists watched as a male dolphin, in the presence of a female dolphin and her calf, dove down to the seafloor, removed a large marine sponge, balanced it on his beak, and pushed it towards the female.

“We were at first perplexed to witness these intriguing behavioural displays by male humpback dolphins, but as we undertook successive field trips over the years, the evidence mounted,” said Allen in a statement. “Here we have some of the most socially complex animals on the planet using sponges, not as a foraging tool, but as a gift, a display of his quality, or perhaps even as a threat in the behavioural contexts of socialising and mating.”

Indeed, as Allen hints, these displays may not be as romantic as they sound. As the researchers write in their study:

Alternatively, and perhaps more likely, the presentation and, in particular, tossing of the large sponges in the direction of the female may serve to intimidate, analogous to branch dragging and shaking or the hurling of rocks by male chimpanzees (Pan troglodytes) to enhance their charging displays during sexual coercion. Indeed, a threatening or dominance aspect to such displays might also explain the thrashing of plant material and other objects by Amazon river dolphins.

Dolphins are a tremendously hierarchical species, and the sponge gathering (as strange as it may sound) could be a way for males to reinforce their place within the social order, and thus, their suitability/desirability as potential mates. Surprisingly, some large adult male dolphins were seen working together in pairs. It may be a weird case of, in the words of the researchers, an example of “cooperating to compete.” Or in other words, the dolphin version of a “wing man.”

“The formation of alliances between adult males for the purposes of coercing females is uncommon, since mating success cannot be shared,” said study-co-author Stephanie King. “This is a new finding for this species, and presents an exciting avenue for future research.”

For sure—there’s still lots to learn about these dolphins and how these ornamental displays are tied to mating, attraction, and the maintenance of the social hierarchy. Importantly, the researchers aren’t even sure if these sexual displays are actually improving the male dolphins’ odds of mating. The scientists say that behavioural and genetics studies will be required to suss this all out. But there’s one thing we can be very certain about, and that’s the high degree of social complexity among these aquatic mammals. [Scientific Reports]