Remarkable New Supernova Discovery Is Unlike Anything Seen Before

Astronomers have spotted something truly baffling: a new light 500 million light years away that looked exactly like a supernova...but acted like no supernova observed before.

The new discovery and its spectral lines (the colours of light it sent our way) allowed scientists to classify it as a typical Type IIa supernova, the kind from large exploding stars. But this one remained bright for six times as long, with no sign of its ejected matter slowing down. And it sits in exactly the same spot as another supernova. All of this demonstrates just how little we know about the eventual fate of very massive stars.

One of the paper’s authors saw the initial discussion of the supernova and knew he had to get involved. “When I saw the proofs of the paper it kind of blew my mind,” Nick Konidaris, CalTech astronomer, told Gizmodo. “The notion that a star exploded in 1954, then left over enough material such that it could explode again, however many years later, really did not intuitively make sense to me.”

Robotic sky surveys spotted the new light back in September 2014, after which astronomers made repeated observations. Supernovae have always been associated with the death of stars, according to the paper published today in Nature. And spectral lines have aways revealed these stars ejecting fast-moving matter, followed by the appearance of slower-moving matter beneath. But repeated observations of iPTF14hls didn’t demonstrate this slowdown. And while other supernovae dim after 100 days, this one remained bright after over 600 days of repeated observations, including some periods where it got even brighter.

On top of that, this supernova sits in the same spot as another event from 1954—though one astrophysicist from the Harvard-Smithsonian Center for Astrophysics not involved with the study, James Guillochon, reminded Gizmodo that data taking methods were more primitive back then.

Still, this is sort of like the never-say-die Black Knight from Monty Python and the Holy Grail, but with stars. 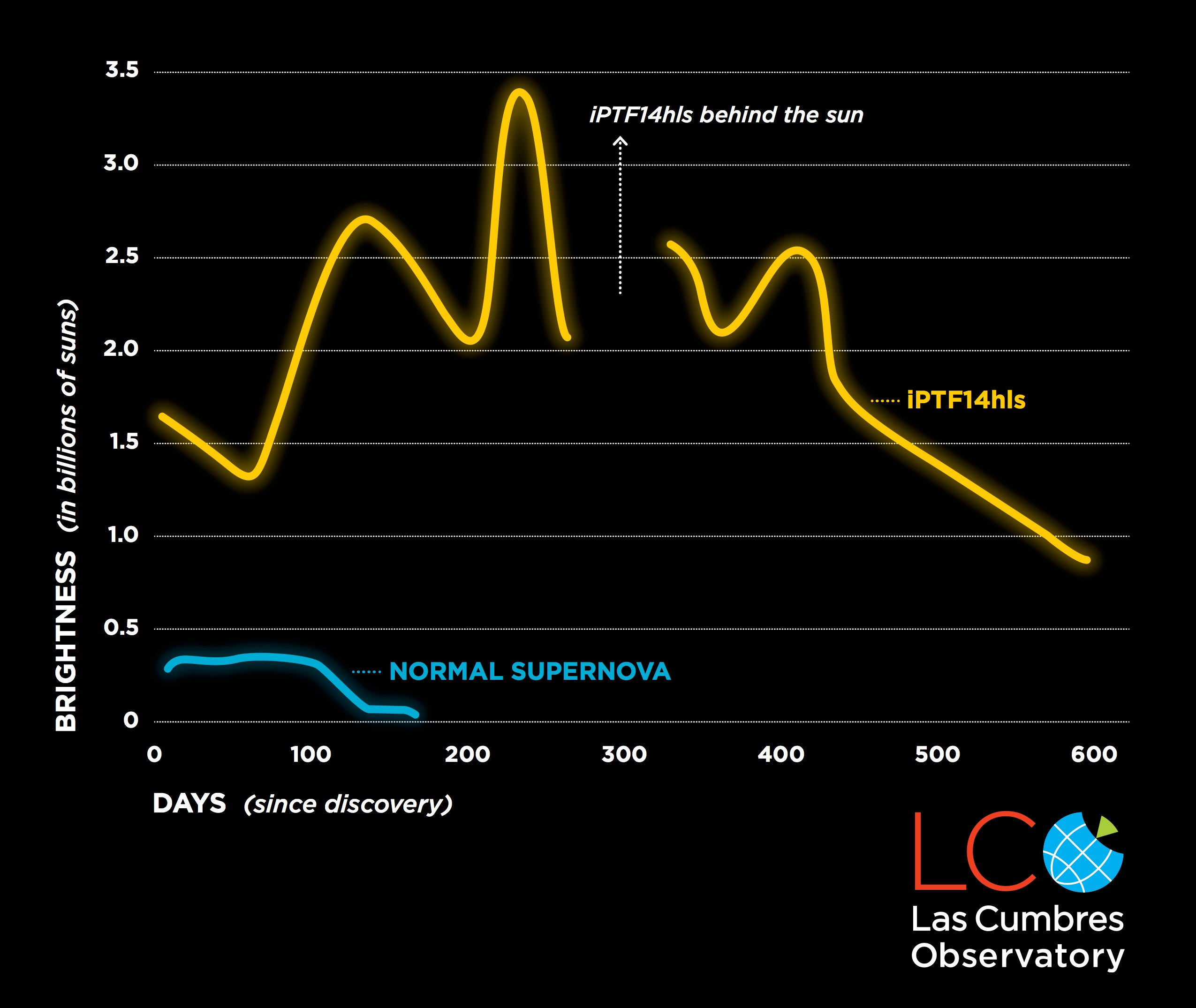 So what’s going on? Perhaps this supernova thew out a shell of gas before the eruption, and the astronomers observed that shell instead of the supernova. “The apparent ejection of a large quantity of material six decades prior tells us that the late stages of stellar evolution are complicated, and that stars might undergo multiple violent convulsions before they truly die,” said Guillochon in an email.

The authors comment in the paper that existing models of supernova in huge stars, like those 100 times the mass of the Sun, don’t account for this observation. That makes supernovae like this one useful. “It falls into the category of ‘weird objects provide really good tests for our theories’—it often takes a really well-developed theory to account for the fringe events as well as the normal ones,” said Ashley Pagnotta, astrophysicist from the American Museum of Natural History not involved in the study, to Gizmodo in an email.

She hopes that astronomers continue to monitor it, “to see if this was in fact a terminal supernova explosion, or something weird like 2009ip,” which ended up being a supernova-imposter, a blue star that quickly brightened.

Even so, the sheer amount of data gleaned from this one event means it will be important for a long time, Matt Nicholl, astrophysicist at the Harvard-Smithsonian Center for Astrophysics (also not involved in the study) told Gizmodo in an email. It also shows that there’s probably a lot we don’t know about supernovae.

“It seems we need to look much more closely at seemingly ‘normal’ supernovae in future,” said Nicholl, “to see if a few more exhibit this crazy behaviour!” [Nature]