An international committee devoted to the future of particle accelerators has recommended that scientists halve the energy of the next big collider, according to a statement issued last week.

The decision comes at a time when scientists worry they may not find any more new particles with the world’s present-day largest particle collider, the Large Hadron Collider (LHC) in Geneva, Switzerland. Japan would build the proposed collider, called the International Linear Collider, though it likely won’t be ready until 2030, according to an article in Nature. The report from the International Committee for Future Accelerators (ICFA) found that downsizing could potentially cut costs by around 40 per cent and reduce the amount of digging required to build such an experiment.

A quick physics lesson: Particle colliders come in different flavours. The Large Hadron Collider is the world’s largest—a 17-mile-round ring of super-cold magnets that crash bunches of protons into one another at nearly the speed of light. Pumping all of that energy into the protons creates a whole lot of debris during the collision which become particles; owing to Albert Einstein’s E=mc^2 equation, we know that energy and mass are equivalent. Physicists hope that the debris will reveal particles they didn’t already know about. 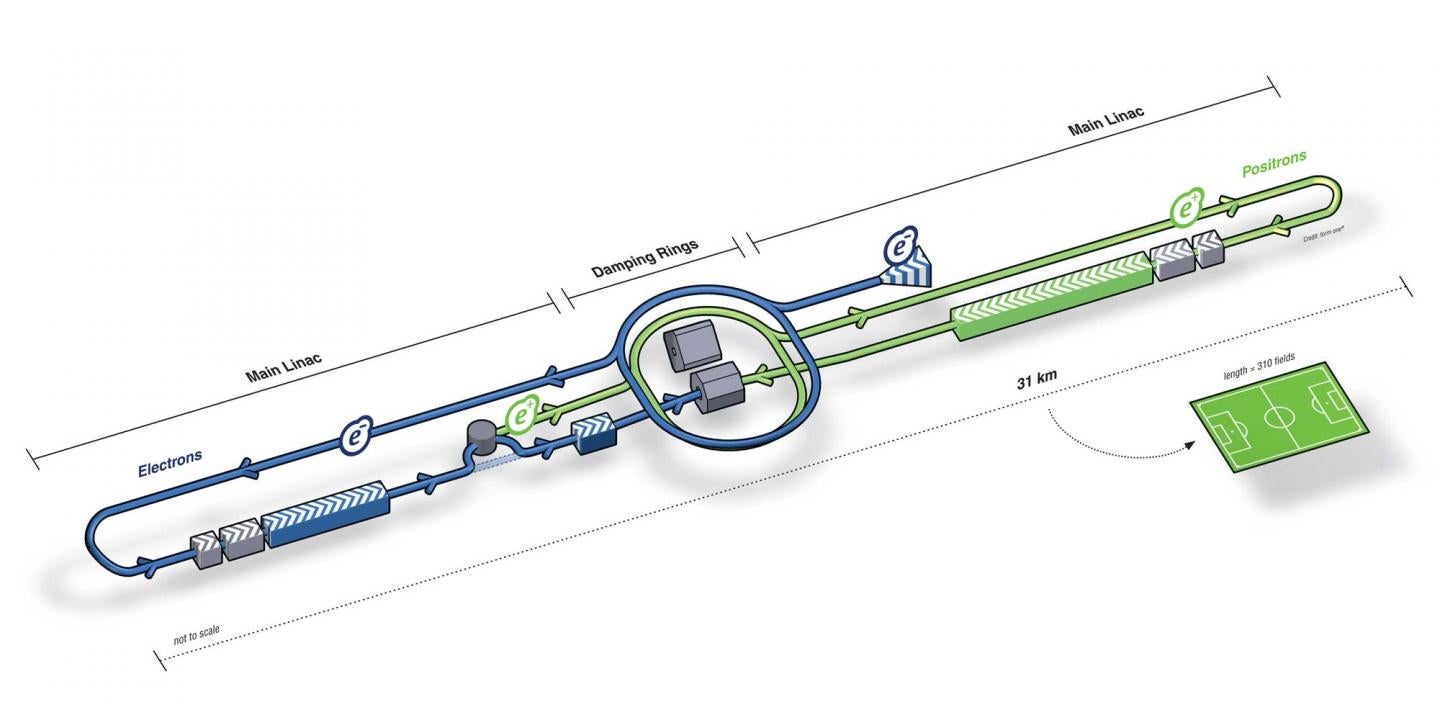 A now-outdated ILC schematic, not to scale. Image: ILC

The International Linear Collider would instead collide electrons and their antiparticle, the positron, also with super-cold magnets. Instead of a ring, it’s a straight line, maybe ten miles long (depending on the final construction decision). Rather than discover new particles, this accelerator’s purpose would be to make precision measurements of the recently-discovered Higgs boson.

It’s basically a Higgs factory, and an improved understanding of the Higgs’ properties may offer scientists some clues on where to look next to solve some of physics’ outstanding mysteries.

But the original plan cost as much as $10 billion (£7.6 billion), which, according to Nature, deterred the Japanese government who had planned to host the machine. And there haven’t been any fundamental particles discovered since the Higgs, giving physicists even less reason to pursue a machine as originally realised. Some physicists are beginning to lose hope, although others think the lack of new particles is really an exciting opportunity.

The downgrade from 500 to 250 giga-electron volts (the “electron volt” is how particle physicists measure energy) would still yield a machine capable of studying the Higgs, although it would be outside the threshold of studying the heaviest quark, the top quark. Upgrades would be possible at a later date, according to a recent report.

Physicist John Ellis from King's College, London and CERN was disappointed by the news, and told Nature that physicists were “making significant scientific compromises” via the downgrade.

It’s still up to Japan to make the call and begin construction. All the while, CERN, home of the LHC, is dreaming up an even bigger collider as long as 60 miles around.

So no, the future of particle physics doesn’t seem to be set in stone. [ICFA via Nature]