Yesterday, Twitter decided to verify Jason Kessler, an organiser of the August neo-Nazi rally in Charlottesville that left one woman dead. Shortly after her death, Kessler even tweeted that the woman was a “fat disgusting Communist” and characterised her murder as “payback time.” But Twitter refuses to explain why it verified Kessler—and users are so angry that Twitter is now suspending its verification procedures while the company figures out what to do.

Gizmodo reached out to Twitter yesterday, asking why it verified Kessler, a man who used the social media platform to mobilise white supremacists, neo-Nazis, and other hateful characters at the largest American hate rally in a generation. Twitter’s response? Non-answers.

“Hi Matt, I’ll refer you to this article from the Help Center for further info on our verification policy,” was the only response to an email I sent with specific questions about Kessler.

And that was it. I asked questions about why they’d verify Kessler, what causes someone to get stripped of verification, and whether they planned to verify more neo-Nazis in the future. But Twitter only sent a link to the site’s Help Center.

The Help Center page includes statements like “A verified badge does not imply an endorsement by Twitter.” Minutes ago, the company tweeted that it will take a time out from verifying users, stressing yet again that verification doesn’t mean that Twitter endorses the views of a user.

Verification was meant to authenticate identity & voice but it is interpreted as an endorsement or an indicator of importance. We recognize that we have created this confusion and need to resolve it. We have paused all general verifications while we work and will report back soon

But even if that was the intention of Twitter’s verification system when it was first introduced back in 2009, that’s simply not true anymore. Twitter has clearly used its verification as a form of punishment when a user does something that it doesn’t like. In 2016, the website stripped former Breitbart writer Milo Yiannopoulos of his verification. It was never clear why Twitter did so, but Milo himself speculated that it was about a “joke” he tweeted to another user, telling them: “You deserve to be harassed, you social justice loser.”

At the time, Twitter told Fusion it wasn’t the first the site had “de-badged a verified user for violating our abusive behaviour policy.”

And Julian Assange has been notoriously frustrated by Twitter’s refusal to verify his account. The Wikileaks founder even created a kind of DIY verification by putting a blue diamond next to his name. Verified or not, it’s clear that the Assange account with over 500,000 followers is the real one. So what purpose does verification serve for the platform? It’s really not clear, but what is clear is that it’s being used as a kind of incentive for power users and celebrities on the site.

Which brings us to Kessler. Not only has he used the platform to organise a white supremacist rally in the real world, he has repeatedly said vile things about the woman who died in Charlottesville after she was violently struck by a white supremacist driving a car.

A week after the rally, Kessler, a Holocaust denier and former contributor to the Daily Caller, tweeted that Heyer was a “fat, disgusting Communist,” and said that her death was “payback time.” He also linked to the Daily Stormer, a neo-Nazi website. 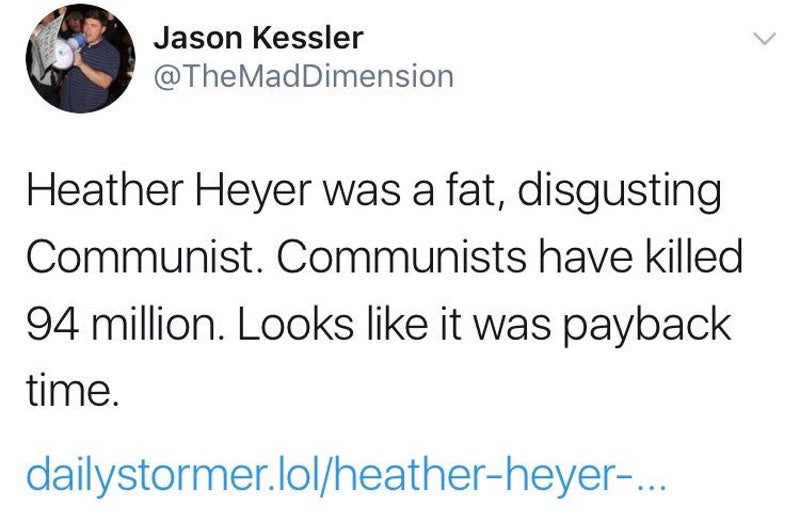 Jason Kessler’s tweet calling Heather Heyer, the woman killed by a neo-Nazi terrorist, a “fast, disgusting Communist” and saying that her death was “payback” (Twitter)

The day after Kessler sent the tweet he deleted it and went through a litany of bizarre explanations, first claiming that he was hacked, and then confessing that he had indeed sent out the inflammatory message. Kessler blamed the heinous tweet on stress and a combination of alcohol, sleep medication, and anti-anxiety drugs.

Kessler seemed to reinforce the idea that it was good to call Heather Heyer despicable things in a tweet the following month, saying that he now believed it was right for the Daily Stormer “to troll Heather Heyer.”

It was right to troll Heather Heyer. I media was depicting a marty, not a human being. Iconoclasm serves a purpose.

But Heyer’s death wasn’t the only horrific scene at the Charlottesville rally, formally called Unite the Right. A 52-year-old member of the Ku Klux Klan opened fire on counter-protesters and other people were beaten by the white supremacist mobs. And all that is to say nothing of the psychological damage done to the Charlottesville community after seeing hundreds of racists carrying torches through their community, a kind of modern day Klan rally.

It’s one thing for Twitter to say that it doesn’t want to ban Nazis from its platform because of free speech concerns. That seems like a reasonable discussion that intelligent people can disagree about. What doesn’t seem reasonable is giving those neo-Nazis a form of tacit endorsement when neo-Nazis are literally trying to kill people in the streets.

Twitter can insist all day long that verification isn’t an endorsement of a particular user’s views. But that’s clearly not the case. It hands out and rescinds verification based on rules that it won’t share with the Twitter community. And people are getting sick and tired of it.

In a follow-up to the tweet sent by Twitter’s support account on Thursday, CEO Jack Dorsey wrote: “We should’ve communicated faster on this (yesterday): our agents have been following our verification policy correctly, but we realised some time ago the system is broken and needs to be reconsidered. And we failed by not doing anything about it. Working now to fix faster.”

Now, Silicon Valley is Totally Cool With a Bill That Could Ruin the Internet

Search for 'Bisexual' on Twitter Right Now, and No News, Photos, or Videos Show Up

Once Again, Google Promoted Disinformation and Propaganda After a Mass Shooting

Mitch McConnell: Tech Companies Should Help Us Weaponise the Internet Against Russia