Your iPhone can charge a lot faster than you thought. When Apple announced the new iPhone 8 and iPhone X, the company glossed over the fact that all three of its new handsets were capable of fast charging—similar to what Android phones have been doing for years. Even now, if you go the spec page for Apple’s latest phones, all you get is a single line saying fast charging can add up to a 50 per cent charge in 30 minutes, but without getting a magnifying glass out and reading item 9 of the fine print, you would have no idea how you’re actually supposed to accomplish that.

The info you really need is buried deep within Apple’s support pages. There, you’ll finally discover that, at minimum, you will need a new Lightning cable—because the one bundled with new iPhones can’t carry enough juice—and a new power adapter: one of Apple’s 29-watt, 61-watt, or 87-watt USB-C power bricks. But that still doesn’t really tell the whole story does it? So in order to figure out how fast Apple’s fast charging really is, I went on a shopping spree and tested almost every charger Apple makes (plus a 30-watt charger from Anker thrown in).

The setup for the test is pretty simple. I killed each phone, fully draining its battery, and then plugged them in, recharging them using one of the Apple’s many power adapters. I then recorded the battery percentage at 30 minutes, and then again at 60 minutes. For chargers that called for a standard USB Type-A to Lighting cable like Apple’s 5-watt and 12-watt chargers, I used the one that came in the iPhone X box. On tests that called for a USB Type-C to Lighting cable like the 29-watt and 61-watt power bricks, I bought a brand new official two metre cable from a nearby Apple store. 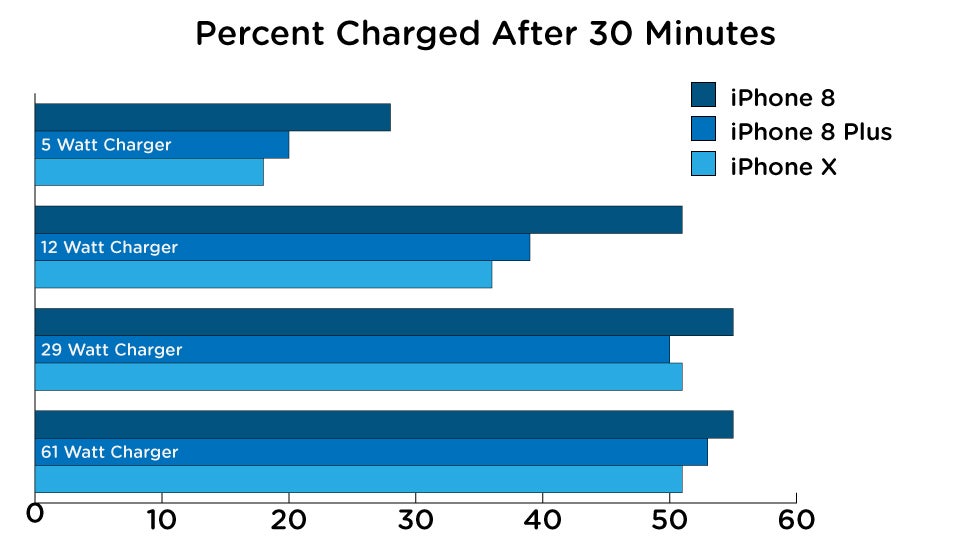 As expected, using a USB-C to Lighting cable and an appropriate power adapter fully lived up to Apple’s promise of delivering a 50 per cent charge in 30 minutes. And if you give the iPhones a full hour to recharge (see the chart below), you can hit between 80 and 85 per cent—more than enough for a full day’s use.

But what I didn’t foresee is how much better fast charging is compared to the standard power adapter and cable Apple includes with every iPhone. Across the board, upgrading to a USB-C to Lighting cable and a burlier adapter recharged two times faster than using the standard cable and 5-watt adapter. We also found virtually no difference between the £49 29-watt USB-C power brick and the £69 61-watt charging adapter, which means you don’t need to buy a more expensive charger to get the best speeds. That said, the 61-watt adapter is the same brick that comes with new MacBook Pros, which could put folks one step closer to their fast charging dreams.

Note: Because we only had time to perform a limited number of tests (it takes quite a while to discharge batteries), there is a little variance to the data. However, you can still see a very clear pattern to the numbers. 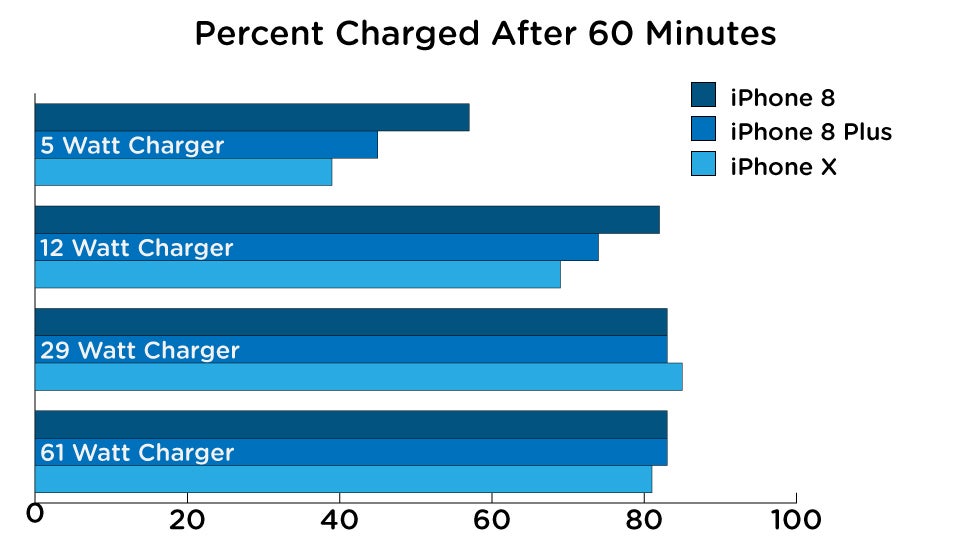 Additionally, the 29-watt adapter charged significantly faster than the 12-watt adapter in almost every case. The one exception to that was with the iPhone 8, which still achieved optimal recharging speeds (most likely due to its smaller battery capacity) when using the less expensive £19 12-watt charger (which happens to be the same charger that comes with new iPads).

But aside from that one case, if you’re looking to get the best charging speeds using official Apple accessories, you’re going to need two things: A USB-C to Lighting cable, and the 29-watt USB-C power adapter.

But here’s the bad news, this combo doesn’t come cheap. Unlike most Android phones that come with fast-chargers bundled in the box, it’s going to cost you £74 to fast-charge your new iPhone, assuming you don’t already have one of Apple’s USB-C chargers lying around from a different device.

We chose not to test Apple’s 87-watt USB-C charging brick, because after seeing results from the 29 and 61-watt adapters, we didn’t see the point in spending £79 on something that would charge an iPhone any faster. And with a current 2 out of 5 star rating on Apple’s site, neither should you.

How to Get Fast-Charging For Less 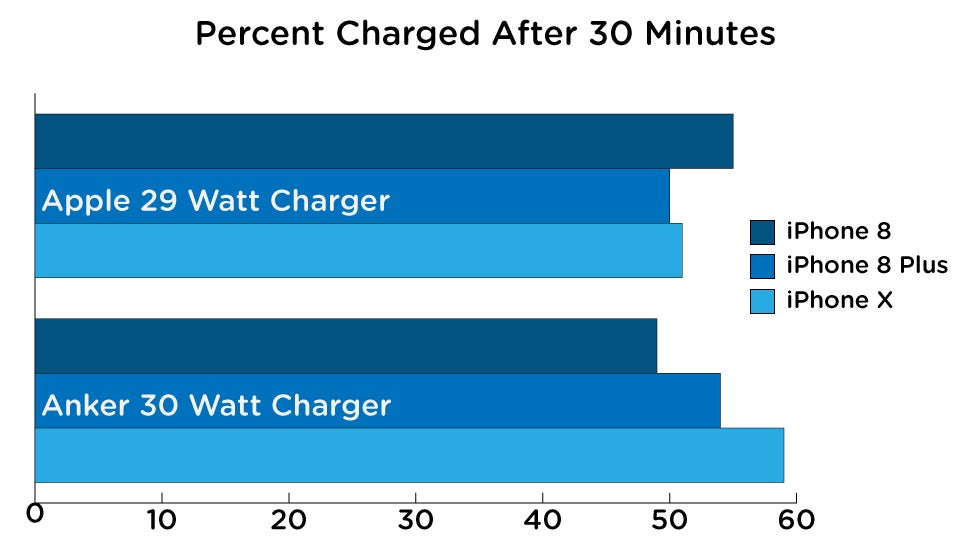 Thankfully, Anker’s £34 PowerPort Speed PD 30 charger costs £15 less than Apple’s 29-watt brick, but it seems you better act quick if you’re hoping to save some dough, because Amazon is continually running out of stock. 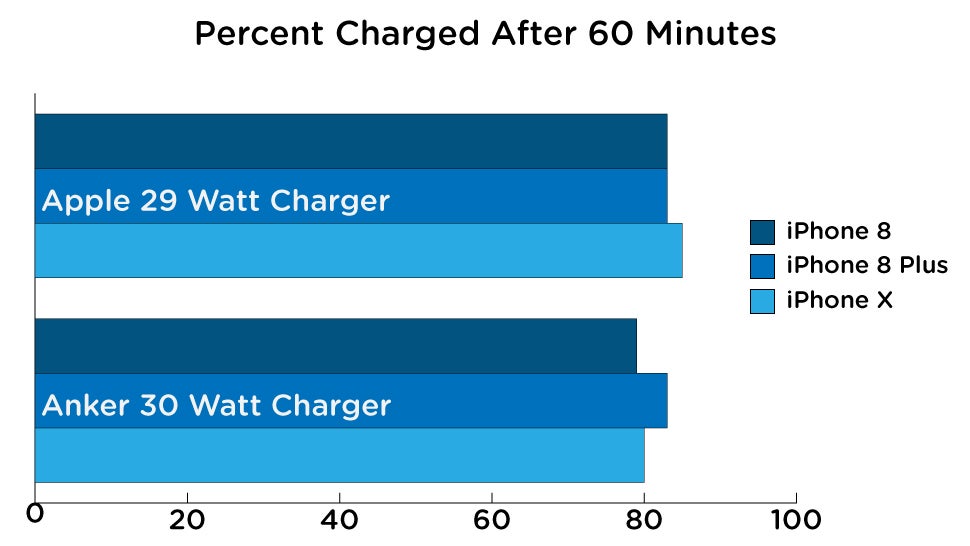 Finding a cheaper USB-C to Lighting cable is a bit more challenging because trusted names like Anker, Monoprice, and Belkin haven’t released an affordable version of Apple’s official cable.

Well, now you know. It just sucks that most people are looking at spending around £40 extra to fast charge their iPhone. But like with a lot of Apple products, things don’t come cheap.

Apple Criticised for Not Investigating App Developer Who Faked Her Cancer