CES 2018: The Vuzix Blade Is What Google Glass Always Wanted to Be

When Google Glass was announced back in 2013, it was easy to forgive one of the the first AR headsets for looking awkward and being hard to use. There’s no doubt Google’s first crack at making an optical head-mounted display was ahead of its time.

The thing that always rubbed me the wrong way about Google Glass though, was how after an underwhelming debut, the company seemingly forgot about its moonshot tech. The only thing that remains of the project are enterprise-only models focused more on assisting business complete specialised tasks than expanding the tech as a whole. 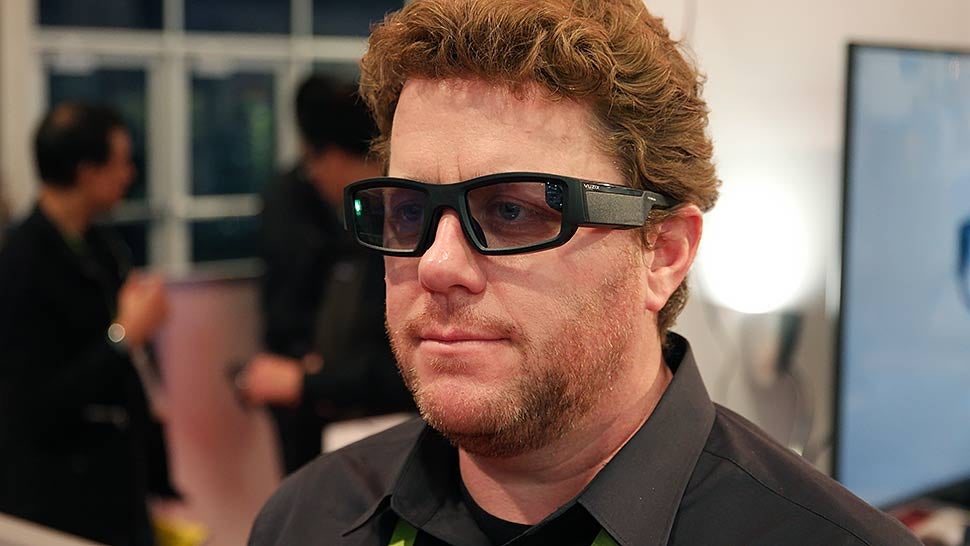 They are a bit thick, but at least they don’t look like alien tech. (All images: Sam Rutherford/Gizmodo)

It’s a shame because if Google had continued to develop the Glass, we might not have had to wait as long for something like the Vuzix Blade. Sporting a tiny DLP projector that spits images onto its full colour see-through display, the Blade uses waveguide optics to project a tiny display onto the right lens of some surprisingly normal-looking glasses.

In addition to the Blade’s innovative display, it also has everything it needs to function as a standalone wearable, complete with a built-in CPU running a customised version of Android, 8-MP camera, 4GB of storage and a microSD card slot, wi-fi, and a mic and touchpad for controlling the device.

Of course, the Blade isn’t just the second coming of the Google Glass, as Vuzix has learned important things about what you have to do to make the concept of smart glasses easier to accept. When I visited Vuzix’s booth at CEs 2018, a representative told me that unlike Google Glass, Vuzix went out of its way to make the Blades comfortable, easy to use and most importantly, something that didn’t look ridiculously clunky or awkward—so as to not scare off the general public. 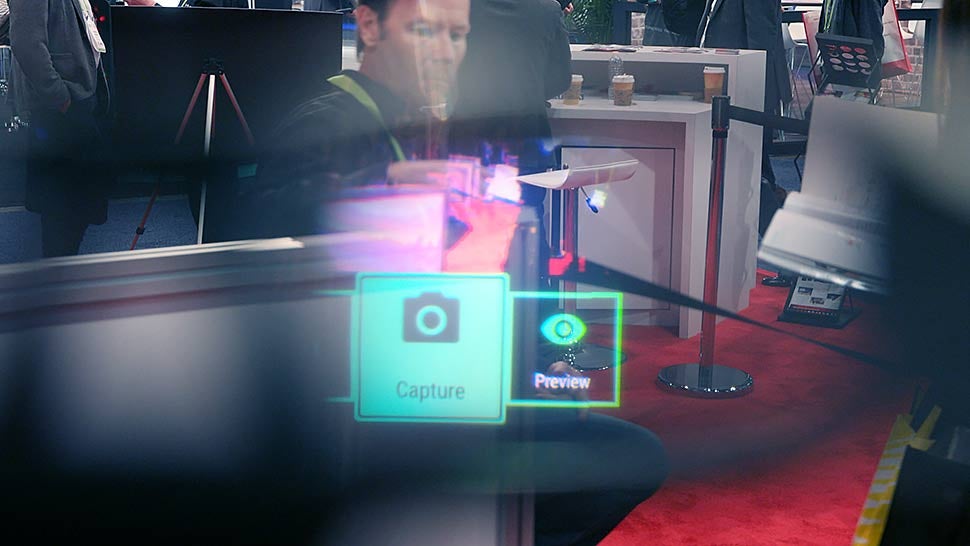 This is the best shot of what it looks like to wear the Vuzix Blade.

On that front, I think Vuzix has succeeded. From 10 feet away, the Blades don’t look too much different from a standard pair of glasses, though the tint on the lenses hints that these are more than a pair of knock-off Oakleys. It’s only when you get up close that you notice the light being sent out from one corner of the glass, and all that extra thickness on the sides and bridge of its frame. 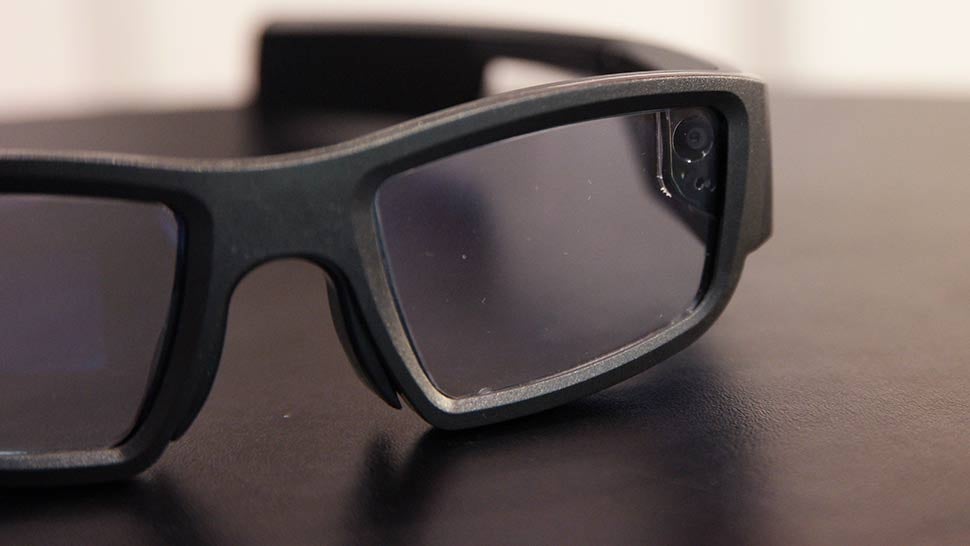 The built-in camera lets you capture POV images and video.

Controlling it is a cinch too. A two-finger swipe on the touchpad built into the right side of the glasses takes you to the home screen, while a one finger swipe advances you through UI, with a single-tap used for making selections.

From there, you can pair the Blade with your phone, which makes it easy to check your messages, view directions or even take first-person photos or videos, using either the touchpad or voice commands. But that’s not all, because in addition to Vuzix’s homemade smartphone companion app, the Blade also sports built-in Alexa integration. So if you want to ask about the weather without pulling out your phone? No problem. How about controlling smart home devices like lights or your thermostat? That’s easy too. 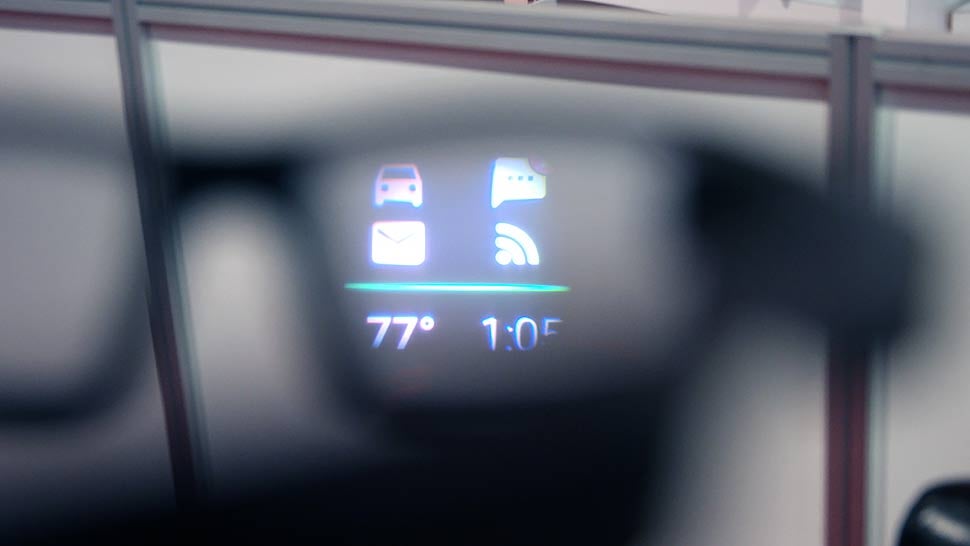 As a trial demo for smart glasses that people might actually want to own someday, Vuzix has finally delivered on what Google Glass showed off almost five years ago. And to be clear, this is all coming from a device that’s still very much in development. Vuzix is selling some dev kits now, for a deposit of £479 towards the full price of £1,932, but the company is hoping to bring the price down before they become more widely available in late 2018 and early next year.

Yes, that price is bonkers for this kind of tech. But making smart glasses more approachable is incredibly important if gadgets like this ever hope to catch on.

CES 2018: The Coros Omni Bike Helmet has Bone Conduction So You Can Cycle With Your Tunes

Here Comes CES 2018, the Biggest Gadget Show in the World—What to Expect