Asteroid mining is about more than just heading up into space and bringing back a rock full of platinum—you actually need to land something on just the right asteroid.

Falcon Heavy, the world’s most powerful rocket launched by Elon Musk-led SpaceX two weeks ago, may have changed the game, says one astronomer.

“Instead of a few hundred we may have thousands of ore bearing asteroids available,” Martin Elvis from the Harvard-Smithsonian Center for Astrophysics told an audience at the American Association for the Advancement of Science annual meeting in Texas.

Asteroids could be ripe with natural resources, including water and heavy metals like platinum, as we’ve reported. Space colonialists like Planetary Resources hope to get mining equipment onto one of those nearby ‘roids to bring the resources back down to Earth and turn into space John D. Rockefellers. But there are tons of challenges—including landing on the asteroids themselves.

Scientists calculate how accessible asteroids are based on a measure for each asteroid called delta-v, change in velocity. This is a shorthand for how much thrust it would take to switch orbits between low-Earth orbit and orbit around asteroid, Elvis once wrote in a paper. It’s measured in units of kilometers per second. Asteroids can have delta-vs from 4 to almost 30 km/s.

If you assume that an economically valuable asteroid is one that’s worth more than a billion dollars, it’s probably around 100 metres, Elvis writes (though there are several kinds of asteroids with different potential materials and value). There aren’t many of those 100-metre-plus asteroids that also have a low delta-v—only around three per cent of them.

But, he said at the AAAS meeting, the Falcon Heavy could increase that delta-v by just a few kilometres per second—a change that could potentially let miners access 45 per cent of these more valuable asteroids. 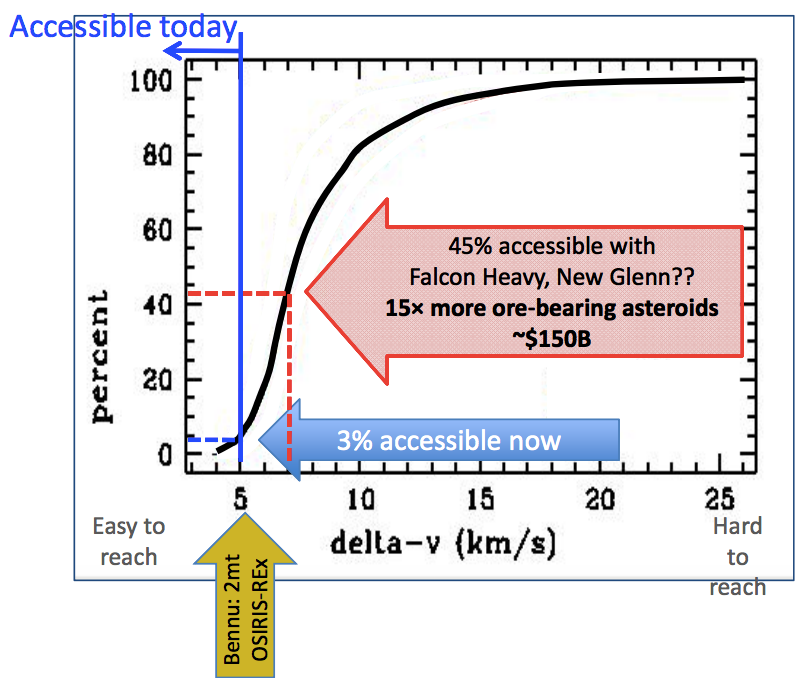 Obviously there are numerous other factors, like developing the technology to actually get to the asteroid and bring the precious metals back, considerations like whether and how all of this will be regulated, as well as legal issues. Also, I feel like launching all of those rockets and processing the metals can’t be good for the environment.

But anyway. We’re inching ever close to a science fiction future, one where the future billionaires might be asteroid barons. What a strange and unsettling thought.

Good News: The Milky Way May Not be Devoured by Andromeda Galaxy After All

When Will We Finally Find a Truly Earth-Like Exoplanet?