These tiny, flipping microbots, currently being developed by researchers at Purdue University, could one day deliver drugs directly inside the body. The magnetically propelled bots are no wider than a pinhead.

In an effort to explore new methods of robotic locomotion, scientists at Purdue designed super-tiny bots that can move in one of two ways: either end-to-end or in a sideways tumbling motion. The all-terrain bots are flat, shaped like a dumbbell, and armed with magnetic tips. A continuously rotating magnetic field compels them into performing their acrobatic maneuvers. They’re manufactured with techniques used in the semiconductor industry, so they’ll be affordable and easy to mass produce. Details of this work were published in the journal Micromachines.

The microbots are about the size of a pinhead. (Credit: Purdue University)

The polymer bots measure 400 microns by 800 microns, where one micron equals a millionth of a metre. That’s tiny—so tiny that the Purdue researchers who developed them had to worry about the physics that happens at such small scales, namely the effects of static electricity and van der Waals forces. The researchers had to take these inhibiting forces into account to keep the bots moving and on track, and to prevent them from getting bogged down by static friction, or “stiction,” as the researchers call it. 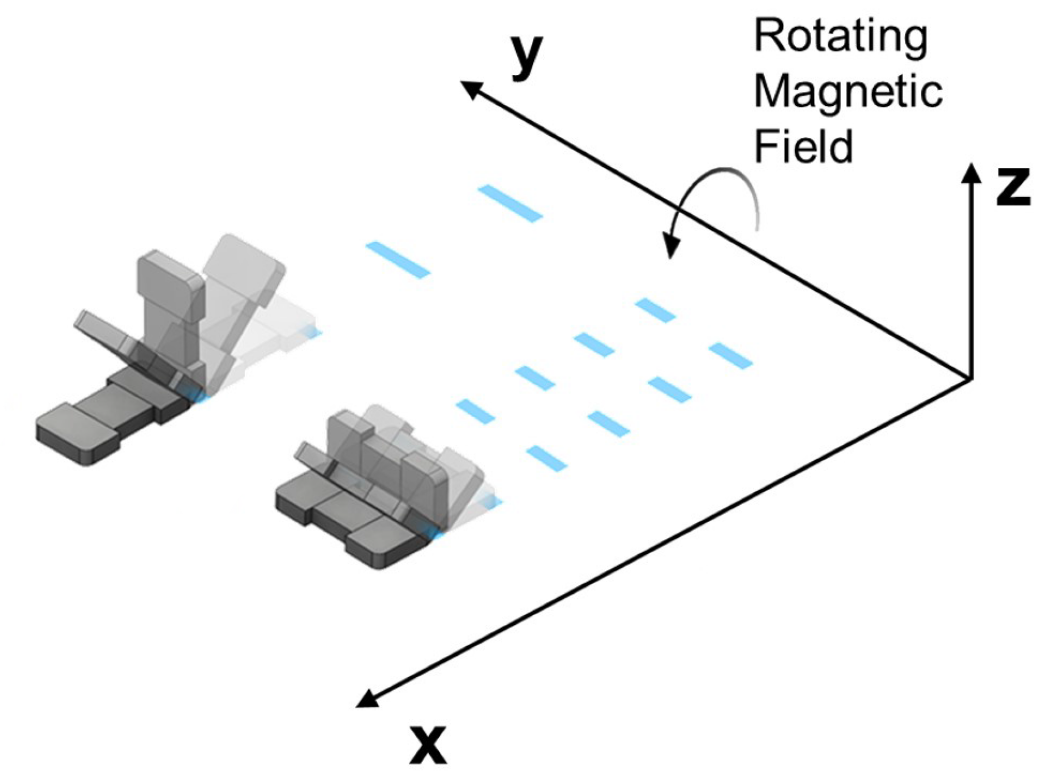 In tests, the bots were clocked at speeds of over 60 body lengths (48 millimetres per second) in dry environments, and up to 17 body lengths (13.6 mm/s) in wet environments. The micromachines were tested in various environments, including dry paper surfaces, water, and silicone oil. The thicker the liquid, the more difficult it was for the bots to tumble, while in low-density environments, such as the open air, their ability to climb steep objects was hindered. In the future, these bots could be designed with sticky feet to make them clingier. The researchers were able to adjust their movements, and adapt them to more complex environments, by changing the alignment of the magnetic particles.

The midsection of the bots is not magnetic, which means it could eventually be used to carry cargo, like medicine. Imagine a future scenario in which a batch of these critters, miniaturised even further, are inserted inside the body. Using an external magnetic field to move them, and an ultrasound to guide the operators, the bots could be directed towards a tumour to release their cancer-fighting drugs, as just one example.

The microbots were tested on various surfaces. (Image: Purdue University.)

“Robotics at the micro- and nano-scale represent one of the new frontiers in intelligent automation systems... taking advantage of their small size, manipulation, and autonomous motion capabilities,” said study lead author David Cappelleri in a statement.

This is still very much in the conceptual phase, and plenty of hurdles still need to be overcome. In addition to improving the predictability of their movements (especially across complex terrains), the scientists would like to create a vision-based control system and use cameras or sensors to guide them. They’re also going to test if the bots can manipulate and move small objects, and see what kind of add-ons can be attached to their midsections.

The future is tiny! [Micromachines]

I Can't Stop Laughing at These Ski Robots Falling Down