Yesterday, a Falcon 9 rocket delivered the PAZ radio communications satellite, along with a pair of SpaceX-owned internet satellites, to low-Earth orbit. It was an otherwise routine launch and deployment, save for the attempt to recover the rocket’s payload fairing—a feat that’s never been tried before.

Normally, SpaceX tries to recover the first stage booster after a launch, but not today. This was the booster’s second launch, with the first one occurring back in August 2017, when it delivered Taiwan’s Formosat-5 satellite to low-Earth orbit. But in its effort to reuse as much of a rocket as possible, SpaceX attempted to recover one-half of the rocket’s payload fairing—a cone-like structure that protects satellites, equipment, food, and apparently Telsa Roadsters as they make their way to orbit and beyond.

Missed by a few hundred meters, but fairing landed intact in water. Should be able catch it with slightly bigger chutes to slow down descent.

After deploying today’s cargo, the payload fairing fell back through Earth’s atmosphere at nearly 10,000 km/h, or Mach 8, before a parafoil slowed down its descent, according to Teslarati. The idea was to catch the fairing out at sea in a net carried by a recovery vessel known as Mr. Steven. Things didn’t go quite as planned, but it wasn’t a disaster. “Missed by a few hundred meters, but fairing landed intact in water. Should be able catch it with slightly bigger chutes to slow down descent,” explained SpaceX CEO Elon Musk in a tweet.

Looking at pictures of the half-fairing taken from the recovery ship, it doesn’t look worse for wear, and it doesn’t appear to have been damaged when it hit the water. Assuming it’s okay (a big unknown—it may very well have irrevocable structural damage), it’ll be the first time in history that a rocket fairing has been successfully recovered. 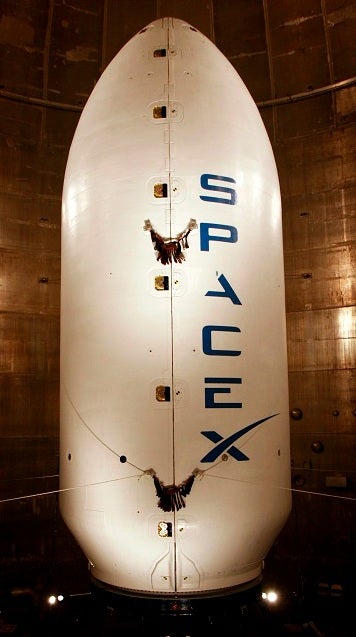 The carbon-fibre fairing, which is built in-house by SpaceX, can be used on both the Falcon 9 and the new, more powerful Falcon Heavy. It consists of two half-cones, which together extend 17 feet (5.2 meters) wide and 43 feet (13.1 metres) high. These things aren’t cheap, costing $3 million per half—hence the motivation for recovery and reuse.

“The analogy I use with my team is, ‘guys imagine we had six million dollars on a pallet of cash,’” Musk said at the ISS Research and Design conference in Washington D.C back in July 2017. “Six million dollars is falling through the sky. Would we try to catch it?’”

The answer appears to be yes, though next time with a bigger net.

In related news, the twin internet satellites known as Microsat 2a and 2b have been re-christened Tintin A and B. The satellites, the first two components of a planned, massive space-based internet communications network, were successfully deployed this morning and are communicating with Earth stations. The duo will attempt to transmit the words “hello world” early tomorrow once they pass over Los Angeles. [Teslarati, SpaceX]