When Black Panther 2 Happens, It Needs To Feature This Unused Character Concept

Sure, T’Challa is a great Black Panther, but what if we saw someone else in the suit?

That someone would be the genius behind the suit, greatest thinker in Wakanda, and brilliant younger sister of the king: Shuri. In the recently released Marvel’s Black Panther: The Art of the Movie, full of concepts and designs from the film, there’s this incredible image, featuring Shuri in her own version of the classic Panther vibranium: 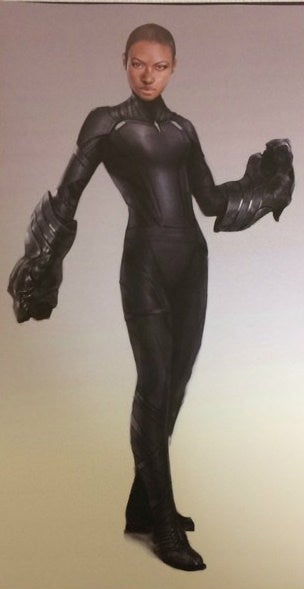 The costume, notably, seems to feature the gauntlets Shuri actually wields during the movie.

Now, listen, Black Panther 2 is inevitable, as sure to happen as the sun is to rise in the sky. When that day comes, this concept needs a resurrection. Shuri made this suit, after all. She deserves her moment fighting in it. Perhaps T’Challa is incapacitated, and Shuri has to take over the mantle (which happens in the comics, for the record). Either way, this is a stellar design and it deserves to happen in live action.

T’Challa is the Black Panther we have, but just for a few moments, at least, Shuri is the one we need to see. [Comic Book Resources]