It seems like pure science fiction. NASA astronaut Scott Kelly goes to space for nearly a year, comes back, and suddenly has turned into a mutant with different DNA from his twin. As Newsweek wrote, his DNA “changed in space.”

Except that’s not what happened.

The saga began last week with the Newsweek story, covering a January NASA press release with the following paragraph:

Another interesting finding concerned what some call the “space gene”, which was alluded to in 2017. Researchers now know that 93% of Scott’s genes returned to normal after landing. However, the remaining 7% point to possible longer term changes in genes related to his immune system, DNA repair, bone formation networks, hypoxia, and hypercapnia.

Kelly himself tweeted the story with the joke, “I just learned about it in this article. This could be good news! I no longer have to call @ShuttleCDRKelly my identical twin brother anymore,” referring to his twin, astronaut Mark Kelly. CNN picked up this story, and now news outlets across the country have since claimed that 7 per cent of Kelly’s DNA changed in space. 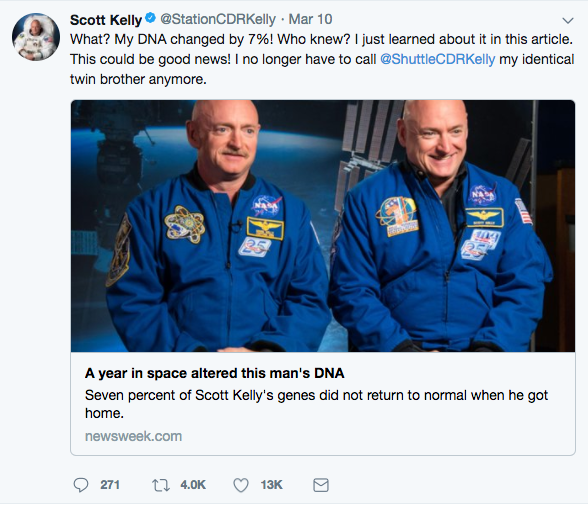 Except if 7 per cent of Scott Kelly’s DNA actually changed, he would be a completely different species. Humans and chimps, for example, share 96 per cent of the same DNA, a 4 per cent difference.

What really happened is that 7 per cent of the way Kelly’s DNA is expressed changed after space travel, as Daniela Bezdan, research director of the Mason Laboratory of Integrative Genomics at Weill Cornell Medicine, explained in a tweet and confirmed in an email to Gizmodo. This is further confirmed in an expanded statement from Chris Mason, who writes that, while there were some mutations in both twins’ DNA after spaceflight, “although 93% of genes’ expression, returned to normal postflight, a subset of several hundred ‘space genes’ were still disrupted after return to Earth,” emphasis mine.

This kind of change is what’s known as epigenetic, and it is something very different.

Space might affect methylation, for example—the act by which chemistry flips DNA sequences on and off, making them readable or unreadable by the rest of the cell. It’s as if DNA were an encyclopedia, with some sentences covered with black tape, making them unreadable. The trip to space could have switched some of the tape around—but the words are exactly the same.

NASA sent us this statement:

Mark and Scott Kelly are still identical twins; Scott’s DNA did not fundamentally change. What researchers did observe are changes in gene expression, which is how your body reacts to your environment. This likely is within the range for humans under stress, such as mountain climbing or SCUBA diving.

The change related to only 7 per cent of the gene expression that changed during spaceflight that had not returned to preflight after six months on Earth. This change of gene expression is very minimal. We are at the beginning of our understanding of how space flight affects the molecular level of the human body. NASA and the other researchers collaborating on these studies expect to announce more comprehensive results on the twins studies this summer.

Bezdan told Gizmodo that she believed Mason would be on CNN tonight to discuss the preliminary results. The related papers will be published later this year.

So, no. Scott Kelly’s DNA is almost entirely same. But the way it’s expressed may be different.