Boaty McBoatface Has Returned From Its Most Perilous Mission Yet

Our favourite autonomous underwater vehicle, Boaty McBoatface, has completed a two-month mission in which it explored a massive ice shelf in Antarctica’s southern Weddell Sea. Swimming nearly a kilometre beneath the surface, and without any human assistance or oversight, Boaty spent over 50 hours directly beneath the Antarctic ice.

Boaty completed its inaugural mission in June of 2017, but the sub has now moved on to bigger, and more challenging, things. As part of the UK’s Filchner Ice Shelf System (FISS) Project, it was sent deep below the surface, exploring the dark and mysterious underbelly of the oversized floating glacier. During January and February of this year, Boaty traveled 67 miles (108 km) in total, diving to depths of 3,100 feet (944 metres). It spent 51 hours directly beneath the Antarctic ice, and 20 hours exploring a section of ice measuring 1,804 feet (550 metres) thick. 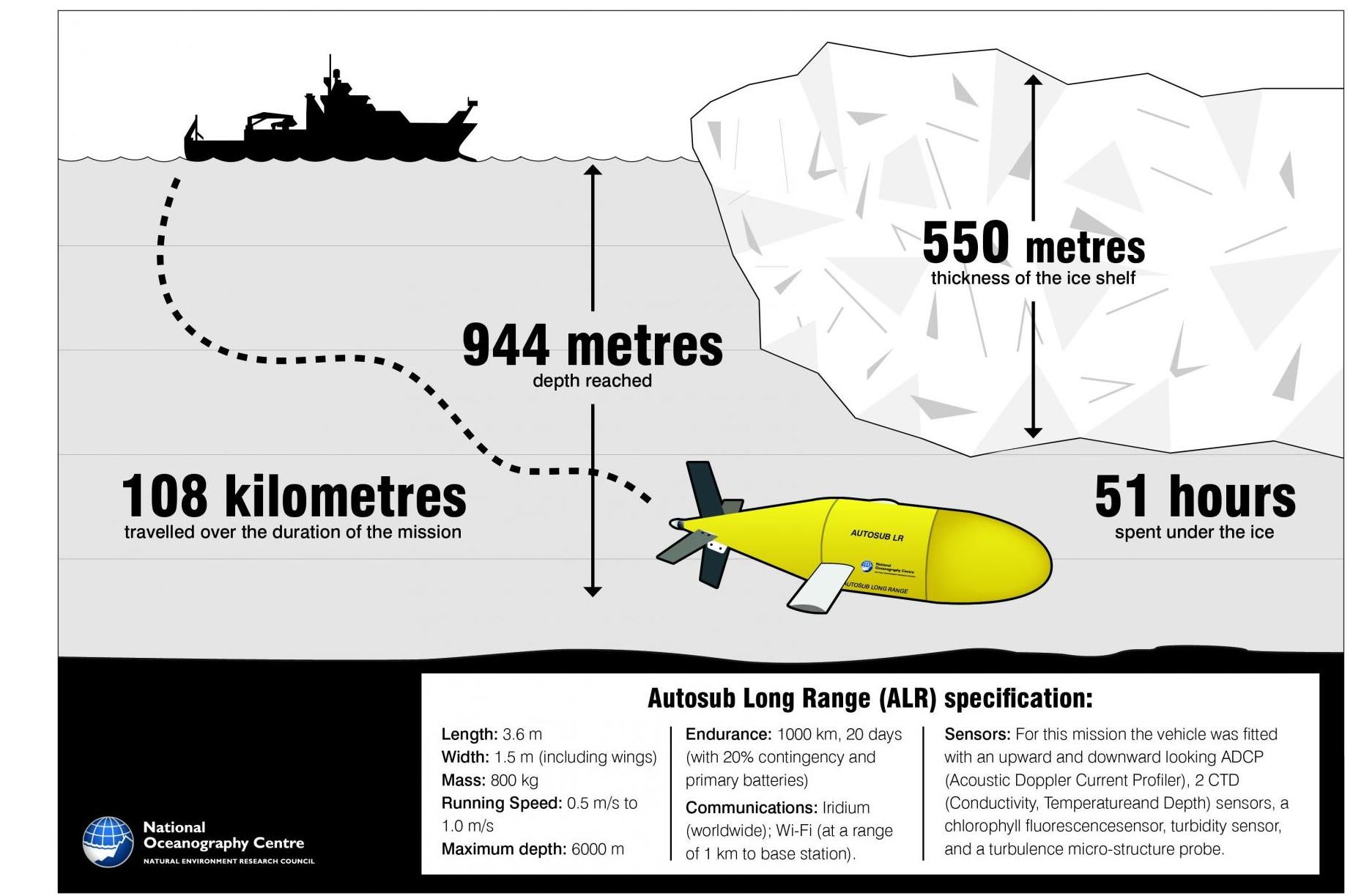 The Filchner Ice Shelf packs more ice than any other, extending across an area 173,746 square miles (450,000 square km) in size, which is slightly larger than all of Germany. The point of the mission, which involves researchers from the National Oceanography Centre (NOC), the British Antarctic Survey, Oxford University, and other British institutions, is to determine how much glacial ice is drifting into the ocean, and to gain a better understanding of how water is mixing and behaving across the front of the shelf. Ultimately, scientists want to be able to generate accurate sea-level projections for the next 50 years.

This is where the autonomous yellow submarine comes in. Boaty McBoatface may have a funny name, but it’s actually a very serious piece of equipment. The UAV is armed with sensors to measure the salinity and temperature of the water, and it can measure ocean turbulence and the speed of water currents up to 262 feet (80 metres) above and below its position. Boaty can also detect the amount of phytoplankton in the water and measure the depth of the seabed below. 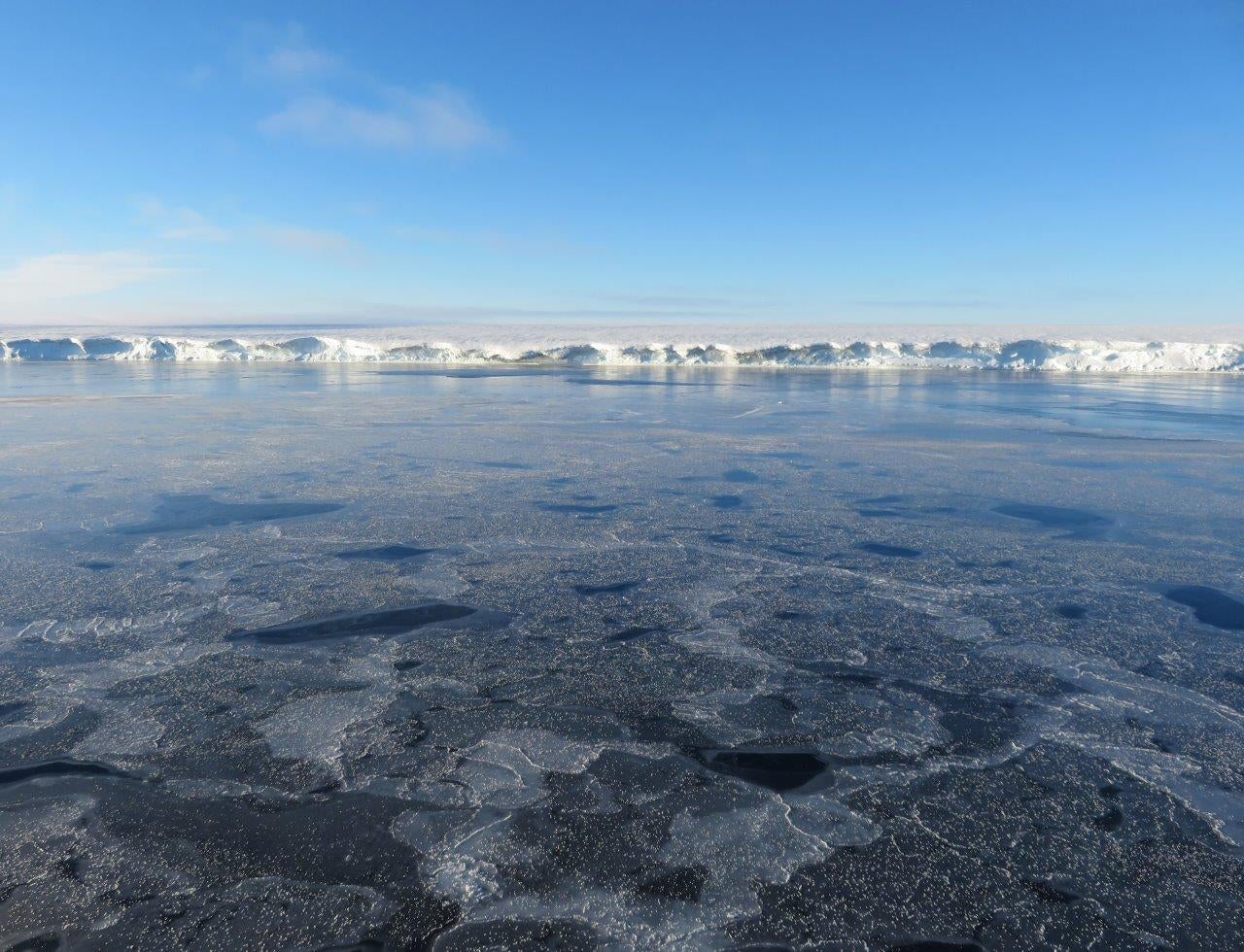 Who wants to go for a swim? The conditions at launch. (Photo: NOC)

For the FISS team, the mission wasn’t without risks. As Boaty ventured up and down the steep vertical walls, it was at risk of being struck by falling chunks of ice. Changing currents could have confused its on-board navigation systems, causing it to crash right into the shelf. The mission was made even more fraught by virtue of the fact that team members aboard the support ship RV Polarstern weren’t able to communicate with Boaty for 90 per cent of its time under water.

“We knew that the environment was harsh, with -20 Celsius air temperatures and sea temperatures very close to the freezing point of seawater,” said Steve McPhail, head of AUV Development at the NOC, in a statement. “Under the ice shelves there are significant tidal currents and the high southerly latitudes pose difficulties for the AUV’s underwater navigation. Once in the ice shelf cavity we had neither detailed information on the thickness of the ice, nor the depth of the water.”

The FISS team would anxiously wait for Boaty to return after being gone for upwards of 48 hours at a time, and in largely unknown marine environments. 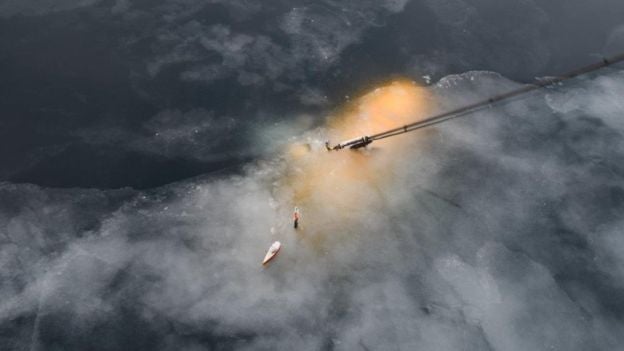 Sea ice would often form on the surface while Boaty was underneath. (Photo: NOC)

“I was very relieved each time the AUV turned up, on time, and in the right place, circling 900m [2,300 feet] below the ship,” said McPhail. “Even then our problems were not over. With the surface of the sea frozen, we needed RV Polarstern’s help to create an ice hole through which we carefully navigated the AUV.”

With this phase of the mission complete, Boaty’s data will now be studied by scientists.

As you may recall, the yellow submarine got its name after the Natural Environment Research Council refused to honour a poll in which the public was given the opportunity to name the UK’s newest polar research ship. Instead, the ship was given the name RRS Sir David Attenborough and the long-range AUV was christened Boaty McBoatface as a kind of consolation prize. [National Oceanography Centre]

Politician Names Boat 'Ferry McFerryface', Blames It On the Public When They Actually Voted For Something Else

Exclusive: Think Boaty McBoatface is Bad? We Reveal What The Research Ship Could Have Been Named

Boaty McBoatface Gets Set For Its First Antarctic Expedition

Boaty McBoatface Is Going On Its First Trip