You probably scratched your head last year if you read about time crystals, likely 2017’s most esoteric, widely covered popular science story. Even if you understood how they worked, you might not have known what use they could have. Time crystals, systems of atoms that maintain a periodic ticking behaviour in the presence of an added electromagnetic pulse, have now piqued the interest of one well-funded government agency: the US Department of Defense.

The DoD’s Defense Advanced Research Projects Agency, or DARPA, announced a new programme to fund research on these systems. More generally, the new DRINQS program will study exactly what its acronym stands for: “Driven and Nonequilibrium Quantum Systems.” But why?

“The applications could be for atomic clocks, where you have an ensemble of atoms you’re vibrating to extract time information,” Ale Lukaszew, programme manager in DARPA’s defence sciences offices, told Gizmodo. “There might be applications related to measuring things with exquisite sensitivity in time and magnetic field domains. Not a lot of these applications are open for discussion.” In other words, time crystal-based military technology is classified.

Despite their name, time crystals are relatively easy to understand. Some atoms have an innate property called spin, which turns them into the smallest possible bar magnets. Time crystals are systems of atoms with a regularly pulsing force, like an electric field, acting on them. This force causes the spins to swap directions regularly. Except the spin’s ticking need not align with the field’s pulsing.

It’s as if the system has taken on a mind of its own. Imagine turning a jump rope, but the rope (the atom’s spin) cycles one time for every two times your arm turns (the electric field), as physicist Norman Yao at the University of California, Berkeley once told me.

DRINQS will fund research for more than just time crystals. Its mission is to study the weirdness of quantum mechanics and potentially find places where driving a system, like adding a regular electromagnetic pulsing force, makes the atoms take on more stable behaviours than they’d have without the pulse. Even if the added pulse wavers a little, the atom keeps their regular ticking. This means that the atoms may be able to retain quantum mechanical properties for a longer period of time without being knocked around or influenced by a neighbouring atom. 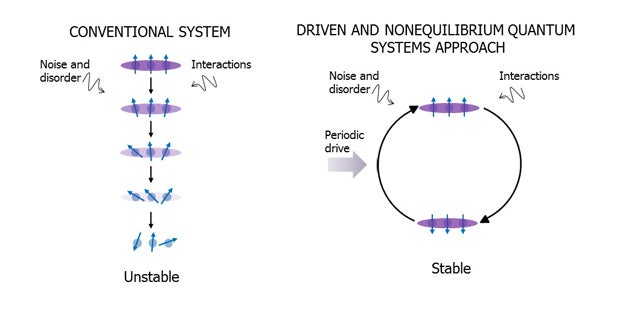 These so-called high coherence times are the main goal. According to a DARPA press release: “The teams will be tasked to develop novel protocols for stabilising coherence in a driven system and demonstrate proof-of-principle concepts that achieve at least 10-fold, and possibly 100-fold, an improvement over the standard limits of quantum coherence.”

Super-precise clocks immediately come to mind as an application for this strange science. While somewhat boring, precise clocks can be very useful. For example, time moves slower in places with higher gravity. The effect is tiny here on Earth, but measuring different gravitational effects with a precisely ticking driven system could allow for things like positioning without a GPS satellite.

“When you need guidance you can’t get out of the GPS framework, or you’re in trouble,” said Lukaszew, “these types of technology may enable that kind of possibility, to navigate without GPS.”

But there are even further possibilities. High coherence times could be important for future quantum computing applications. Ronald Walsworth, Harvard physicist, told Gizmodo that his team works on one such non-equilibrium system, called nitrogen-vacancy centres. These are diamonds with single carbon atoms swapped for a nitrogen atom that could be useful in MRI imaging and other uses related to magnetic fields, like identifying the origins of rocks.

DARPA would fund this research at other institutions, and researchers would be allowed to publish papers on most of their research as they always do. Ultimately, it’s a basic science program, said Lukaszew. “What will be classified is significant outcomes where DARPA sees the potential for transition to something of interest in defence.”

The agency has not selected researchers yet, and the amount of funding isn’t listed in the agency announcement, but proposals are due April 9. Lukaszew thought the first results might be published late this year. [DARPA]

Stephen Hawking Was Right to Worry About Our Impending Doom