Researchers at Northwestern University think they’ve stumbled upon an unexpected new use for the so-called supermaterial graphene: an easy-to-apply, safer, and sturdier black hair dye that could give other permanent dyes a run for their money. The new dye even made hair immune to frizz and static electricity.

A few years ago, Jiaxing Huang, a professor of Materials Science and Engineering at Northwestern University, made a “curious observation” about people’s choice of hair dye while travelling through China. Despite the wide variety of colours available, most people he came across just wanted pitch-black hair. And in his field, there were few things blacker than powder made out of graphene, a material made of pure carbon atoms arranged in a beehive pattern that’s incredibly thin, flexible, and strong.

So, in what Huang describes as a “Friday afternoon experiment,” he and his team decided to whip up batches of graphene-based dye and test them out on samples of blond human hair. They found the dye could wrap itself tightly and uniformly around hair strands, creating a waterproof seal that lasted for up to 30 washes without fading away. And unlike the conventional process for most permanent dyes—which requires treating hair with chemicals like bleach to strip its original colour and pry open the cuticles, then adding more potent (and possibly carcinogenic) chemicals that can damage the hair and irritate surrounding skin—the graphene dye left the hair completely unharmed.

“It doesn’t rely on any chemical reaction—you just brush it on the surface of the hair, comb it, and the hair changes colour,” Huang told Gizmodo.

The findings were published in Chem.

Graphene is ordinarily transparent, but when exposed to oxidising agents like oxygen and hydrogen, it becomes brown. This graphene oxide, which Huang’s team used as the base for their dye, can then be turned darker through a variety of ways, including UV radiation. Huang’s team also used chemicals like vitamin C to further modify the graphene so that it would easily be dispersed in water (meaning it wouldn’t settle to the bottom if left untouched) and could be uniformly applied.

Aside from being about as durable as the permanent dye they matched it up against, the blackest of the dye batches Huang’s team made was only a smidge less darker. And because of graphene’s customisable coloring, they were even able to create an “ombre” look, meaning hair that’s been dyed different shades of colour at the same time that blend into one another. Right now, the range of colours available is still only bronze to black, though Huang believes that would cover the majority of colour preferences. 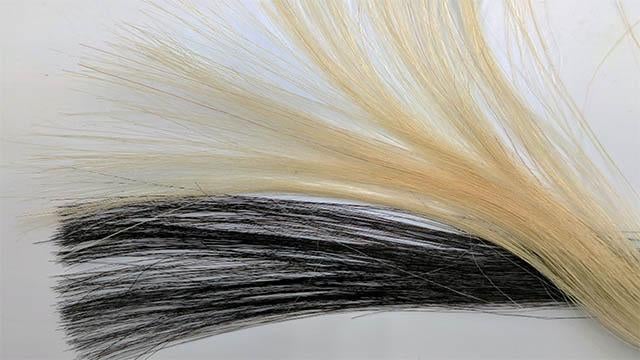 The graphene also bestowed the hair its unique properties. It made the hair frizz-proof, as well as a better thermoregulator, such that someone’s head would theoretically be left cooler on a hot summer day. And because of graphene’s current and potential applications in engineering, Huang thinks the dye could even be used in combination with other near-future technologies.

“I took notice of a lot of recent developments in so-called thermo-electronics. These are electrical circuits and devices that can be directly applied to the skin though something like a stick-on tattoo,” Huang said. “So if you now have conductive hair, then imagine what you could do to interface the hair with these circuits.”

Interesting as Huang’s dye might be, don’t expect it to show up at Boots just yet. Huang is still trying to have his Friday afternoon experiment taken seriously. He says he wasn’t able to find any government agency willing to fund this sort of “unconventional” research.

“The funny thing is, my wife generously supported the purchase of all the hair samples and beauty supplies that we used,” he said. “But I hope people get really interested about this and we’d certainly like to take it up to the next step.”

That would include clearing regulatory hurdles so they could test the hair dye with actual people. Huang believes his dye would have an easier journey being approved than commercial dyes in the past, since animal research indicates that graphene won’t irritate the skin or cause allergies. And while Huang can’t speculate about how much it would cost to scale up the production process, he notes that the dye—unlike other cutting-edge applications of the material—wouldn’t require perfect-grade, expensive graphene.

“I’m optimistic,” Huang said. “I think people will really start looking seriously into this, and then collectively, we might start to see this kind of hair dye very soon.” [Chem]