On the night of 4th July 2016, scientists successfully manoeuvred a basketball court-sized probe into the orbit of the largest planet in the solar system. Some at the Florida launch cheered, some breathed a sigh of relief. But for NASA’s Heidi Becker, this could have been the mission’s end.

Jupiter is more than huge. It’s a ball of gas, flinging more particles around its magnetosphere with higher energies than any physics experiment can recreate here on Earth. It is utterly inhospitable to our technology. Humans who hoped to get a closer look at this gas giant somehow had to build a spacecraft to withstand the harshest radiation environment around any planet in our solar system. Becker prepared the ship, called Juno, to face this sinister place. By her own account, Juno is her child.

“When [the instruments] got mounted on the spacecraft, and I said OK. Go for it. Have fun. Do your job,” she told me.

Becker works as the Juno radiation monitoring investigation lead at NASA’s Jet Propulsion Laboratory in Pasadena, California, in a sparse office on a floor devoted to the Juno mission. She doesn’t erase her whiteboard, which has accumulated years of colourful graphs and physics equations, along with a marker-drawn smiley face whose artist remains anonymous. She’d borrowed a miniature model of the Juno probe, which looks like a three-sailed windmill, to point out its parts for my visit. She handled and looked at it with the care of an artist discussing her masterpiece. 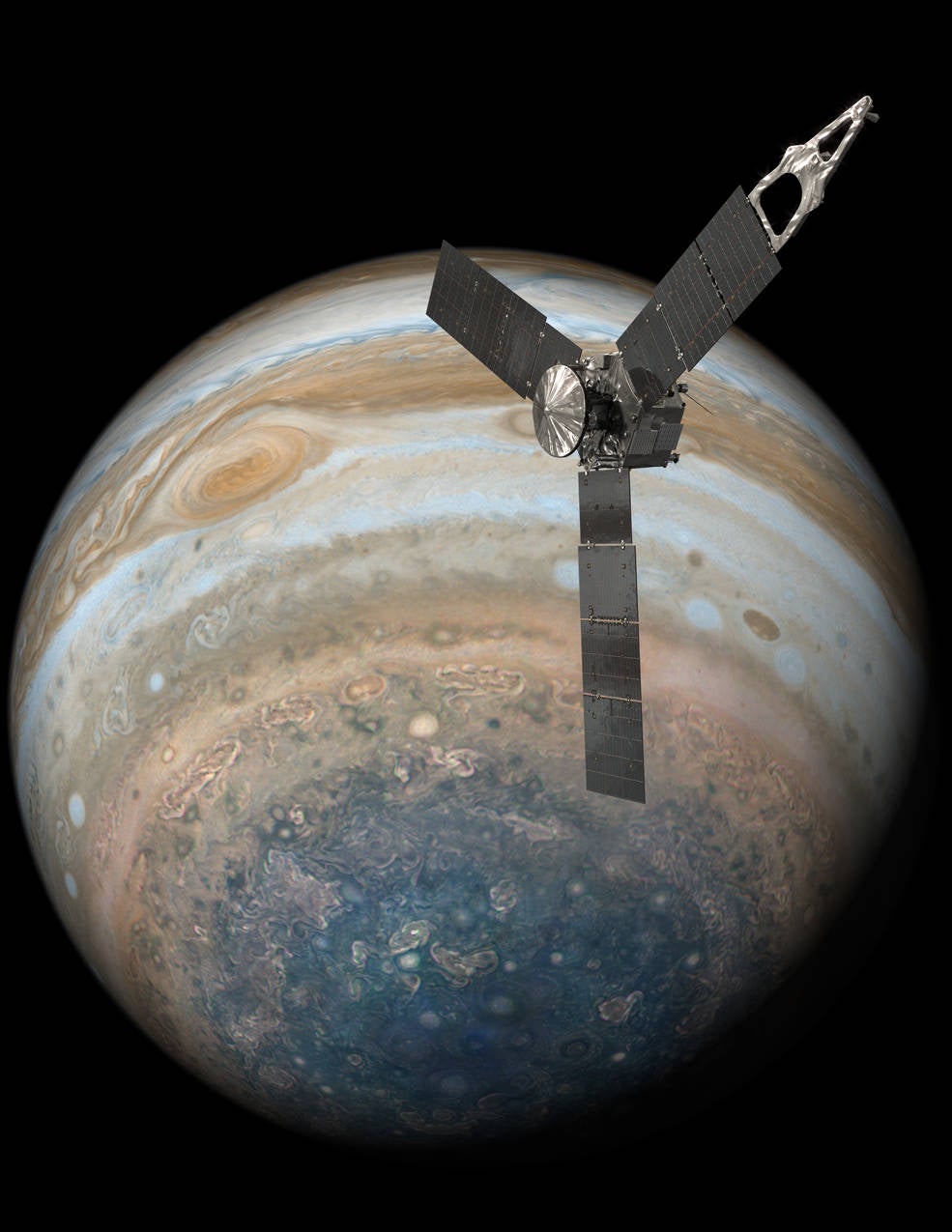 But Becker didn’t always protect a NASA space probe from the most hostile planetary environment in the solar system. As a teenager, she studied dance at the Los Angeles County High School for the Arts, and then she studied theatre at New York University’s Tisch School of the Arts. She was a performer in New York City theatre for several years, but began her switch into the sciences after volunteering at a hospital. She considered pursuing medicine—until she looked at the star-forming Orion Nebula through a telescope. “It was so gorgeous, and I decided at that moment I would go into physics.”

Becker started taking post-baccalaureate classes in New York, including her first calculus class at the age of 26, before moving back to California for her bachelor’s degree in physics at California State Polytechnic University, Pomona. She began working at NASA’s Jet Propulsion Lab while still a student, and started there as a full-time employee after graduation, studying radiation’s effects on devices like sensors and cameras. “And that became my area of expertise, which nobody else was too interested in,” she said.

“You know what lies ahead for it. It’s just going to get its lights knocked out. It’s going to this horrible place.”

That is, no one was too interested until scientists wanted to send a camera- and sensor-covered orbiter into the environment around Jupiter—whose radiation they hadn’t characterised yet. So, still early in her career, Becker joined the Juno team.

Her first job was helping to draft the Juno proposal. In just a few months, the team would need to ensure that its Star Tracker, essentially a telescope combined with a star chart that helps the craft locate itself in space based on the position of the stars, would still be able to guide the spinning craft under heavy assault by radiation. High-energy particles like electrons and protons can fry the electronics carried by the system. The Star Tracker may have started with a clear image, but eventually, particles will create snow like on an old television.

Becker’s role took her and her teammates around the world, looking for places that could recreate Jupiter’s intense radiation belts here on Earth. They tested probe parts in a particle accelerator in New York that was previously used to design nuclear-blast-proof submarine hulls. They went to oncology labs in the middle of the night, placing the eyes of the cameras onto exam tables and hitting them with high-energy particles normally reserved for studying human tissue. And despite all that testing, they still didn’t know for sure if they’d gotten everything right—though they’d tested far beyond NASA’s margin of error, the craft was heading to parts of Jupiter no spacecraft had been before.

Just how much radiation is there in Jupiter’s magnetosphere? Well, Juno will be getting approximately 100 million dental x-rays worth of radiation by the time the mission is over, said Becker.

“You know what lies ahead for it. It’s just going to get its lights knocked out. It’s going to this horrible place,” she said. “It’s the way a lot of us feel—maternal/paternal feelings, towards the spacecraft and the instruments.”

The probe launch from Florida in August 2011 was one of the most amazing moments of Becker’s life, she said. “I got to run outside and physically see it fly over my head,” she said. “To physically say goodbye to it and see it launch on its way to Jupiter is so awesome.” This also marked a transitional period. She was no longer an engineer, but a scientist documenting the effects of the Jovian atmosphere on the probe’s instruments, and more. Her work would reveal not just the limits of some of Earth’s best technology, but also help map the planet’s uncharted radiation belts.

Perhaps her most stressful moment after launch occurred while Juno returned to Earth’s orbit for a gravitational assist, as many planetary probes do, to help fling it towards Jupiter in 2013. The team had been hoping to test some of the science instruments when Juno unexpectedly entered safe mode, a near-complete systems shut down after detecting a problem. The issue was soon resolved, but “it was almost the complete opposite of the experience of the beauty of a launch,” she said. “It was a heart-stopping moment because you have no idea if you’re ever going to go or if you’re healthy until you’ve fully come out safe mode.”

Juno finally approached Jupiter in July 2016. Science fans around the world watched with bated breath and celebrated when it entered the orbit. But Becker didn’t know whether her projects were successful until data streams actually showed up at NASA on the next day. It wasn’t until two months later when the instruments began taking data during “perijove one,” the first time the probe would come closest to the planet in its orbit to take data, that she had confirmation that things were working as expected.

This looping animation simulates the motion of clouds in Jupiter’s Great Red Spot. The animation was made by applying a wind movement model to a mosaic of JunoCam images. (Image: NASA/JPL-Caltech/SwRI/MSSS/Gerald Eichstadt/Justin Cowart)

The probe has since lived a year and a half in the harsh Jovian environment, delivering some of the most incredible images imaginable along with tonnes of science—some have said that it’s completely subverted what we know about giant planets. As we wrote, Jupiter’s gravitational field looks different than we thought it would, and it has chaotic storms at its poles and a magnetic field twice as strong as scientists expected.

Becker and her team have since used their instrumentation to take a picture of the planet’s ring from the inside out, and have continued to map out the strength of the planet’s radiation belts. They will watch the Star Tracker and other instruments degrade, as they expect they will, over the next few months. Becker has turned her radiation monitoring into some revolutionary science, shedding further light on Jupiter’s radiation belt as well as how radiation affects scientific experiments in never-before-studied ways.

And the degradation has barely begun. As the probe approaches the planet’s equatorial region, it will face perhaps 10 times more radiation than it already has. “There may be moments where suddenly we lose information, or won’t be able to determine where the Star Tracker is pointing anymore because the radiation is too high. Snow in the image would just block out all the stars,” she said. “And our job is to be there to tell the spacecraft team what the radiation is doing and what we see,” making contingency plans on which scientific instruments to use and how if something goes wrong.

But like other probes orbiting distant worlds, Juno’s life will soon end, potentially as early as July of this year unless it receives a budget extension. At the end of its mission, Juno will take a final plunge into its adoptive planet, just as Saturnian probe Cassini did in 2017. Becker and I discussed Cassini and Juno’s eventual demise only briefly, during which she grew especially quiet. “Watching Cassini crash into the planet and watching the last signal was horrible. I wasn’t even on Cassini... You’ve got this amazing spacecraft that can do these wonderful things and you just burned it out,” she said.

As for Juno, “It’s really hard. I’m in denial about it because I’m so connected to it. It’s not marked on my calendar.”

Becker’s impact on planetary science will far outlive Juno, though.

“[Becker’s] are some of the most sought-after papers by other scientists who’ve never seen anything like it,” said Scott Bolton, Juno’s Principal Investigator from the Southwest Research Institute. “They’ve never seen an engineering experiment turn into a science experiment. I think it’s pioneering.” And others are using her results for their own missions. “Another NASA mission that’s going to go explore [Jupiter’s moon] Europa is starting to read her papers and thinking about trying to copy her effort.” Bolton didn’t think any spacecraft in the future would ignore her radiation monitoring efforts or how she used equipment normally reserved simply for navigation to do research.

Collaboration has been one of the best parts about working on the project, said Becker, since it felt very much like the creative projects she remembered from before her days as a scientist. And together with her team, the research has been both trailblazing and transformative.

“I got to evolve as Juno evolved,” she told me. “I think everybody on Juno is seeing things no one has ever seen before. Everything we thought is wrong, and there is nothing better than discovering that. We know that our exploration is worth it.”