My Ultra-Competitive Side Loves This Sensor-Packed Smart Ball

A Bluetooth-connected foam ball packed with sensors and a battery you need to charge sounds like one of Silicon Valley’s worst ideas. Haven’t balls been adequately entertaining kids for centuries already? But it only took one toss of Play Impossible’s Gameball for me to understand why a ball upgraded with stat-tracking technology isn’t actually a terrible idea—I just wish it wasn’t so expensive.

About a decade ago I bought a spinning top toy that used a series of flashing LEDs to display the number of revolutions it had made. It was another simple upgrade to a classic toy, but I can remember spending entire afternoons challenging family members to see who could keep the top spinning the longest. We were all very competitive, and the upgraded top let us finally confirm who was the master of a toy designed for three-year-olds.

Play Impossible’s Gameball serves the exact same purpose. Instead of a top, it upgrades another equally timeless and low-tech toy with two accelerometers, a magnetometer, Bluetooth, and a rechargeable power source. It can still be played with as you would any other ball—you can throw it around, or bounce it off a wall—but as an adult I’m far more interested in its other play mechanics. Using those sensors, the Gameball can quantify how it’s being played with, which opens up a bunch of unique challenges and games when connected to an accompanying app on a mobile device. 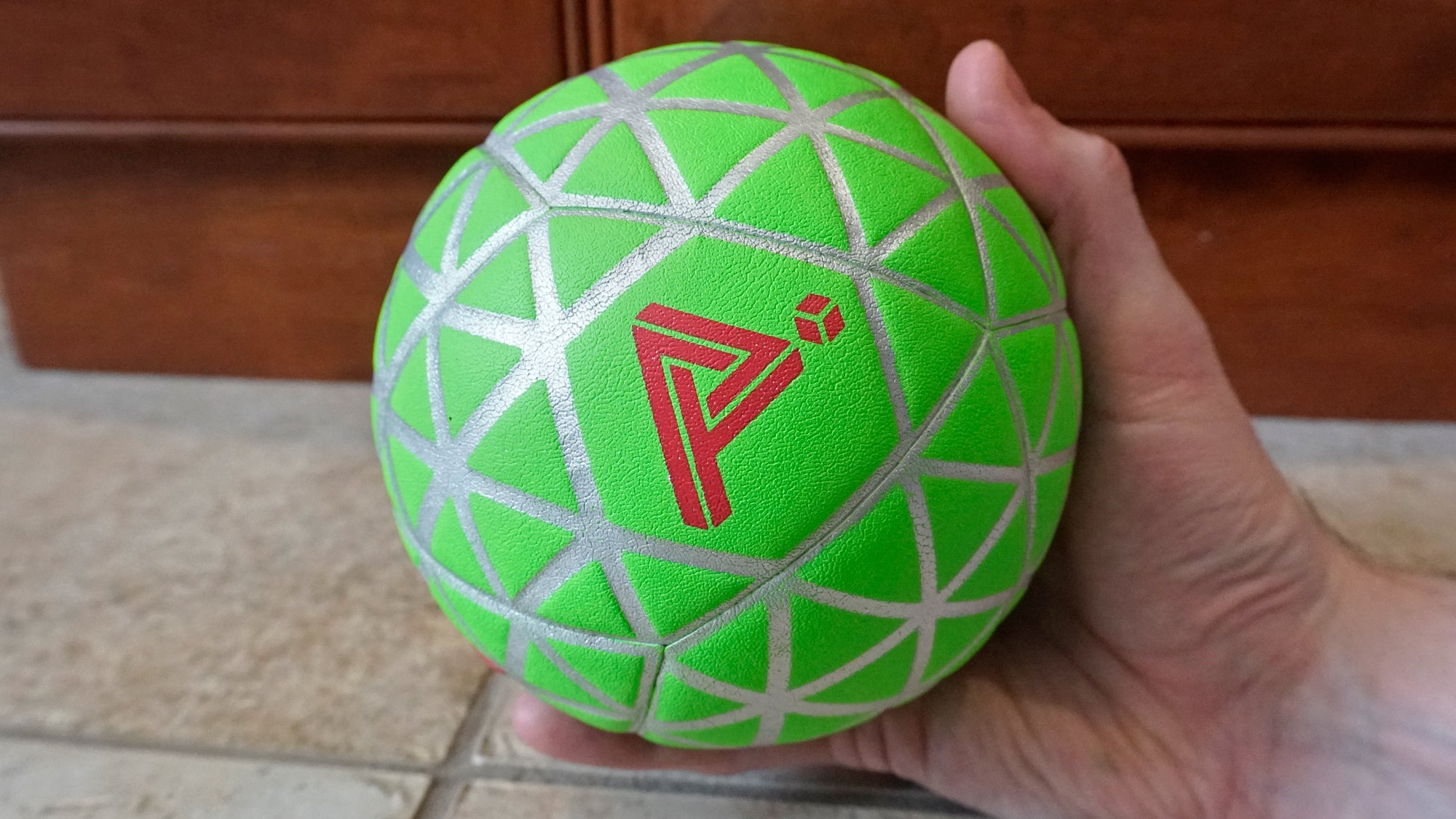 Size-wise, the Gameball falls somewhere between a softball and basketball, and definitely hits a sweet spot. (Photo: Andrew Liszewski/Gizmodo)

Falling somewhere between a volleyball and a softball in terms of size, the Gameball might rekindle fond memories of tossing a similarly-sized Nerf basketball around your room. But while you can squeeze and squish a ball made of foam, and throw it as hard as you want without worrying about breaking anything, the inflatable Gameball feels as firm as a volleyball or basketball. It’s still lightweight, the technology inside isn’t noticeable, but if you’re not careful you can easily take out lamps and other breakables with it. 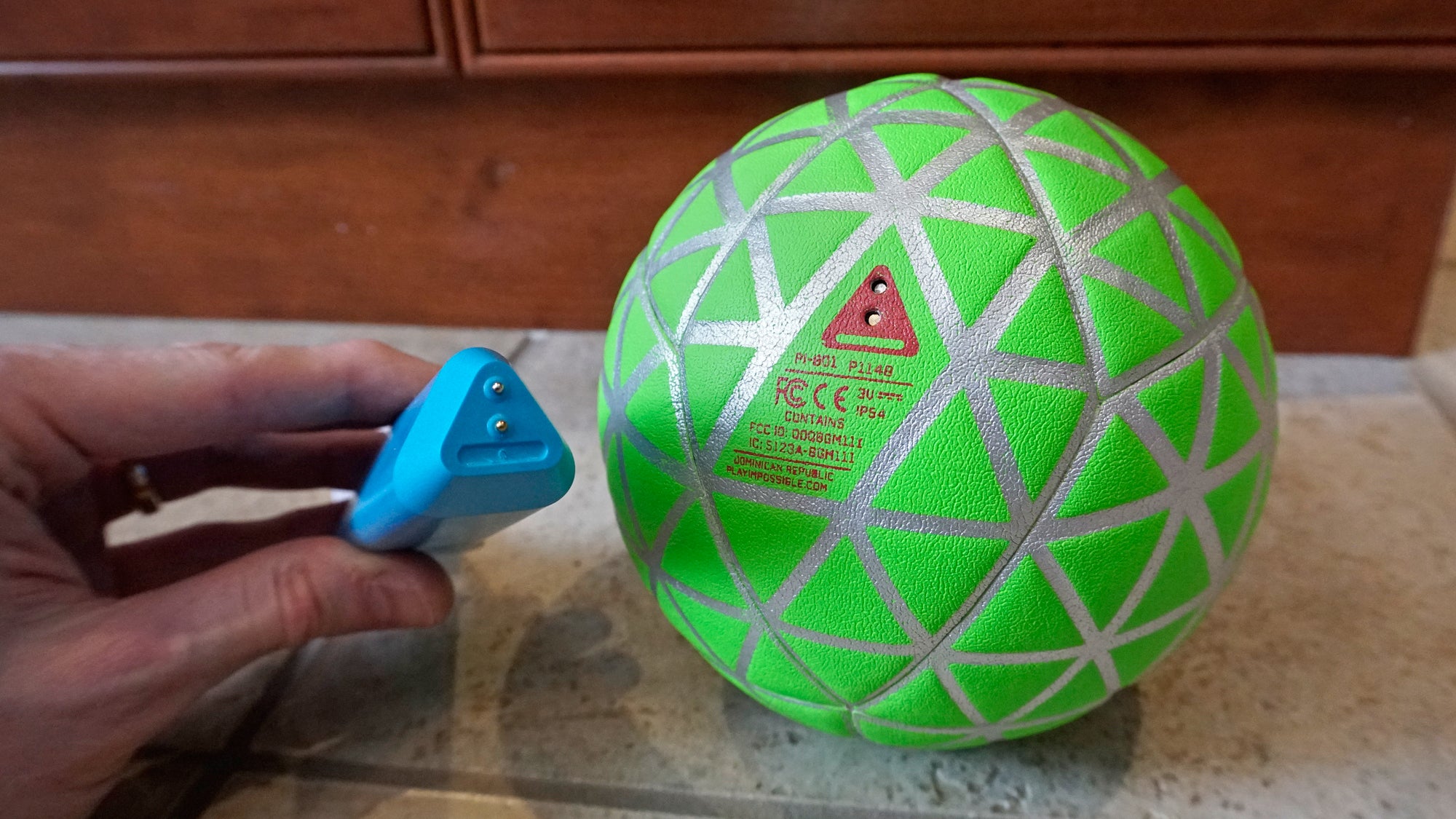 Yep, 2018 has brought us the first ball you need to charge. (Photo: Andrew Liszewski/Gizmodo)

One of the reasons the simple ball has remained such a popular toy for centuries is that it requires no maintenance; it’s always ready to just pick up and play. So I’ll be the first to admit that I groaned when I learned that the Gameball requires charging. The last thing I need, or want, is yet another device to have to remember to plug in every night. 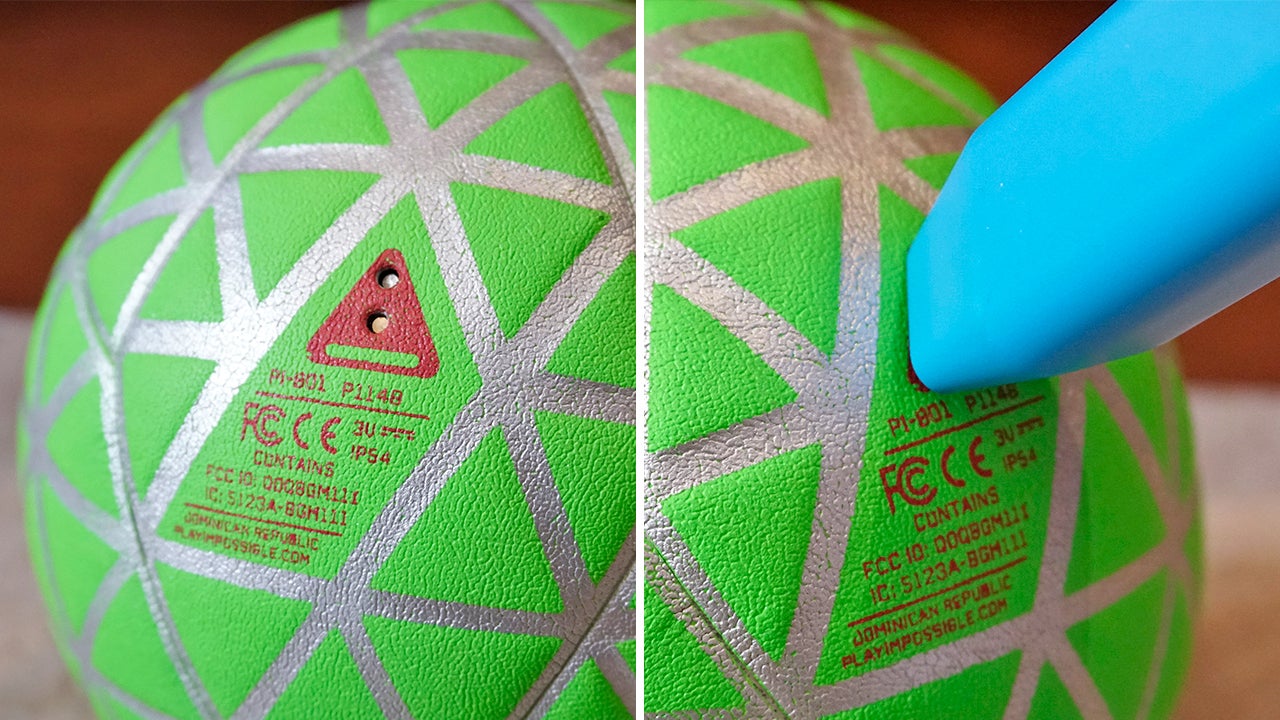 Having to recharge the Gameball isn’t as annoying when it takes just 20 seconds. (Photo: Andrew Liszewski/Gizmodo)

However, it’s not as bad as it sounds. Instead of a battery, inside the Gameball is a super-capacitor slightly smaller than a AAA. It powers the bar for a solid hour of play, which is a lot shorter than an actual AAA battery would. But charging the Gameball takes just 20 seconds using a special charging wand—that’s shorter than most YouTube pre-roll ads. 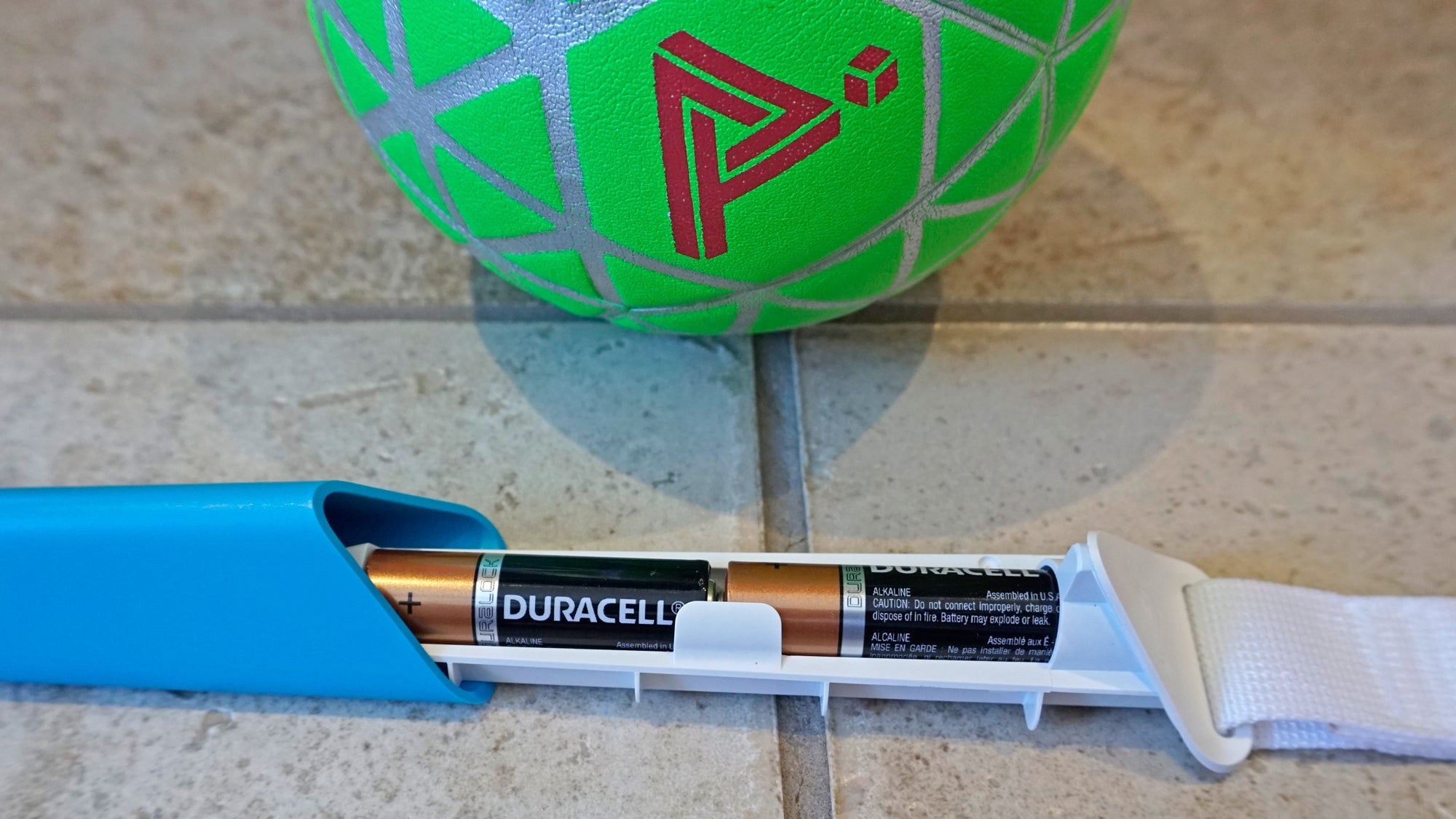 It’s a clever alternative to having to plug in a cable and wait a few hours to start playing again after the Gameball dies, and my only complaint about this approach is that if you lose that charging wand, you’re out of luck until you get it replaced. But this is one of those rare times when I’m not completely enraged by the use of proprietary charging hardware.

As you play with the Gameball, the app shows a collection of stats on what it’s doing, and it can be highly addictive. (GIF: Andrew Liszewski/Gizmodo)

So why am I not also enraged by a tech-packed ball that, at least on paper, seems like a totally unnecessary upgrade? Because as a highly-competitive person, my brain loves metrics, and when connected to its mobile app, the Gameball delivers real-time stats on the ball’s speed, height, airtime, RPMs, and G-forces every time you throw it.

A simple game of catch is no longer just about who’s the first to drop the ball. Instead, you can compete with a friend to see who can toss the ball the highest, who can throw it the fastest, or who can send it soaring through the air for the longest amount of time. Seeing these real-time metrics and stats displayed on my iPad every time I play with the ball is the perfect drug for a competitive brain like mine.

Adding to the Gameball’s replay value, Play Impossible has packed the app full of simple, but addictive, games that create unique challenges based on the motion sensor data. For example, you can compete against friends to see who can shake the ball most vigorously for 12 seconds, or who can hold it absolutely still until a timer runs out.

Throwing the ball in the air and catching it again might be challenging for a toddler, but throwing it exactly three feet in the air is an entirely different challenge, and that’s what gives the Gameball its unique appeal. It manages to combine technology and a classic toy in a way that genuinely creates a compelling new product. It’s the antithesis of a toaster radio.

So should you run out and buy the Gameball? Sitting around a table or the living room playing games is still a pastime my family enjoys. And while playing with the Gameball is a little more physically-demanding than cards or a board game, I think it’s still a great addition to a family game night—or a family game all-night-long if you’re like me and find yourself obsessing over high scores. 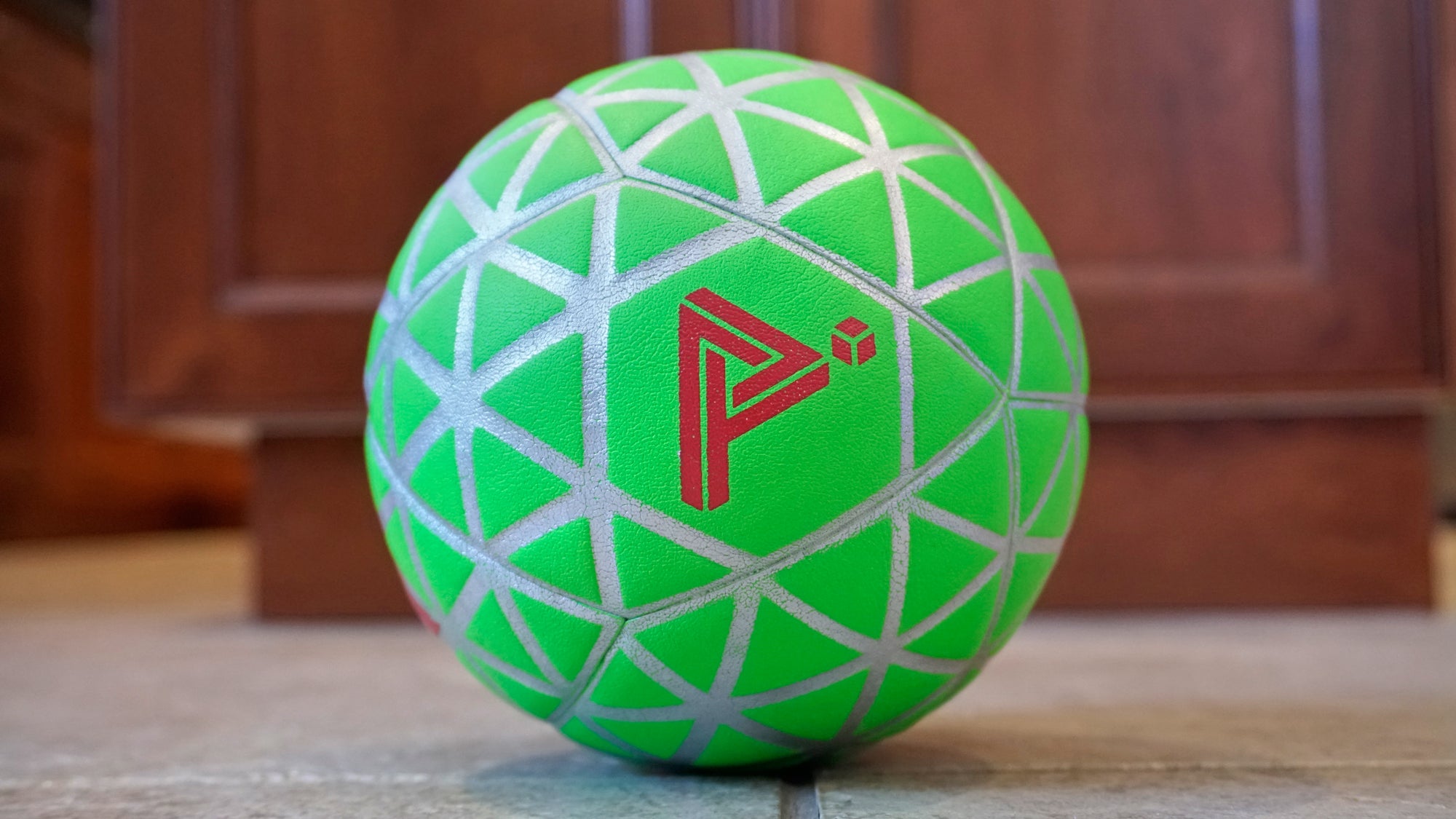 Fun, with lots of replay value, but the price tag is a major stumbling block. (Photo: Andrew Liszewski/Gizmodo)

The only stumbling block is the Gameball’s expensive $100 (£71) price tag, plus its limited availability; currently the ball is only sold via the (US-based) Play Impossible website and Amazon US. The ball itself is well made, its charging solution is clever, and the app is lovely, but that’s a LOT of money to pay for a simple toy using sensors that even a £40 tablet from Amazon has inside. At £15 the Gameball would be a no-brainer, but at nearly five times that price I’d instead recommend keeping an eye out for a steep discount.