White and black feel like opposites for a reason. Black-coloured things absorb nearly all of the light that strikes their surface, while white things send the light back, scattered equally at all wavelengths. A team of European scientists have essentially created the whitest paper using this physical property. How white is it?

“If you’re painting a wall white, you have to paint a few times,” study author Olimpia Onelli from the University of Cambridge told Gizmodo. “With our material we can paint it with a 10-micron thickness.” That’s smaller than the width of the finest hair. 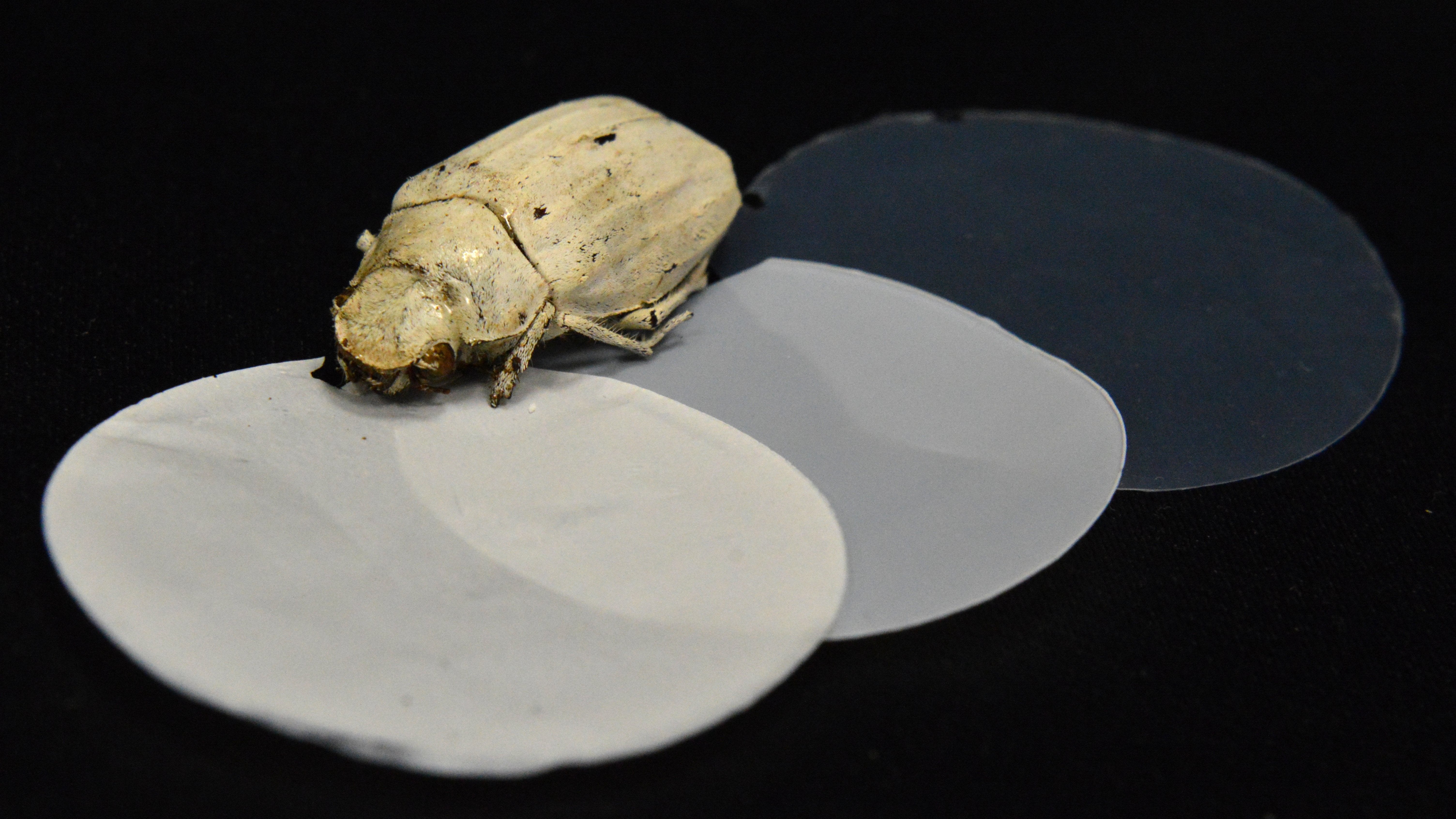 Different preparations of the material and beetle that inspired it. Unlike vantablack, which absorbs all light, a very white material would still show shadows or smudges. Photo: Olivia Onelli (University of Cambridge)

Light travels as waves, and its colour is determined by the distance between the waves’ peaks. The human eye can only see light with wavelengths between 380 and 750 nanometres or so. Surfaces that only scatter light of individual or small sets of wavelengths might appear red, blue, green, or another colour, depending on the wavelengths they send back to your eye. But white materials should scatter light of all wavelengths equally—and the key to creating a white material is creating a rough, porous surface that light can bounce around in.

Titanium dioxide usually serves as a white pigment, but some are concerned about the compound’s negative health effects when prepared as nanoparticles (it’s generally considered safe otherwise). The researchers were inspired by the white Cyphochilus beetle, whose scales scatter light through a complex web of a biological structure called chitin.

The new material uses cellulose nanofibrils—nanometre-scale fibres of cellulose, a plant-based material similar to chitin used to make paper. The researchers spin cellulose in a centrifuge until only the fibers of the proper width to scatter the visible wavelengths of light are left in a liquid suspension. Once the liquid dries, a randomly assorted collection fibers with the proper whiteness remains.

And it’s really white, perhaps 20 to 30 times whiter than white filter paper, according to the study published recently in the journal Advanced Materials. It’s not the whitest, since there are whiter titanium dioxide options. But since the material is biocompatible, its uses are endless—you can put it in food, cosmetics, or even paint. It’s not ready for production yet, and the researchers will now need to think about adapting the process for the industry.

Massive Moon Gets the Kids Excited About Church

A Brief History of Stephen Hawking Dishing Out Downers

Physicist Stephen Hawking Has Died at the Age of 76