Koko the Gorilla, Famous for Learning Sign Language, Has Died

Koko, arguably the world’s most famous gorilla, has died at the age of 46. Known for her ability to communicate through sign language, Koko forever changed our conceptions of primate intelligence and emotional capacities.

Earlier today, the Gorilla Foundation, a not-for-profit that cared for Koko, announced the sad news in a tweet.

The Gorilla Foundation is sad to announce the passing of our beloved Koko | https://t.co/ers1vGAlQ3 https://t.co/O3bvTDoQvE

“Her impact has been profound and what she has taught us about the emotional capacity of gorillas and their cognitive abilities will continue to shape the world,” noted the Gorilla Foundation.

Koko, who passed away on 19 June in Woodside, California, died at the age of 46, which is actually quite old for gorillas, who rarely make it to 50. The female lowland gorilla was born on the 4th of July in 1971, and was originally named Hanabiko, which is Japanese for “fireworks child.” 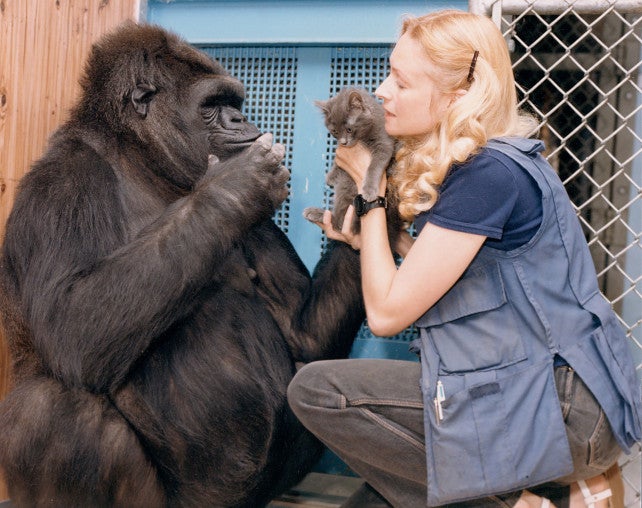 Koko was famous for her remarkable social skills, namely her ability to communicate with humans through American Sign Language. Koko, as part of psychologist Penny Patterson’s thesis project, was taught to sign when she was still an infant. Over the years she acquired well over 1,000 signs, 600 of which she used on a regular basis. Originally based at the San Francisco Zoo, Patterson’s project is now considered the longest running ape language study in the world.

Koko, the gorilla known for sign language, has passed away at the age of 46. Here she is on the cover of the 1985 National Geographic. #RIPKoko pic.twitter.com/U95wNsGdWy

Researcher say Koko, who enjoyed picture books based on the “Three Little Kittens” and “Puss in Boots” stories, asked for a pet cat in 1983 and flatly refused a stuffed animal substitute, saying it made her “sad.” Finally she was granted a kitten, which she named All Ball. Koko would play with the kitten for hours, but when All Ball was fed up with being babied she’d wiggle away from Koko, prompting the gorilla to sign “obnoxious” and “cat.” Sadly, All Ball was struck and killed by a car just six months later. Koko appeared to express sadness over losing the pet, signing “cat,” “cry,” “have-sorry,” and “Koko-love.”

Koko would go on to meet with such celebrities and Betty White, Fred Rogers and Robin Williams. In 2012, she learned to play the recorder, showing that gorillas are capable of controlling their breathing, a capacity previously thought impossible for nonhuman primates. In 1976, the Gorilla Foundation was formed to house Koko and a male gorilla named Michael, who also knew how to sign and died in 2000. It took on another male named Ndume in 1991, who was housed alongside Koko until her death this past Tuesday.

Over the course of the sign language project, some critics, such as linguist Noam Chomsky and cognitive scientist Steven Pinker, complained that Koko didn’t really understand what she was doing or saying, and that she was merely copying the researchers’ hand movements, or trying to earn rewards and praise. This is becoming an increasingly minority position given what scientists are learning about primate intelligence and their innate communication skills.

Researchers have since taught other great apes to sign, including chimps, bonobos, and orangutans. It’s generally agreed that, while these animals can learn to convey words in meaningful ways, they lack the capacity for syntax and proper grammar. When signing, Koko and other primates express a word here or there, sometimes stringing several words together to express more complicated meanings. But as for uttering complex, grammatically correct sentences, that’s considered beyond their capacities.

Nonhuman primates cannot speak like us because they don’t have human-like vocal cords, which can close fully. Nonhuman primates have also been taught to communicate with keyboards, expressing themselves through graphics-based, symbolic languages. [The Gorilla Foundation, NPR, LA Times]