Where do you go to tell a secret? Probably depends on the secret. What you’d feel comfortable murmuring to a friend in a private meeting is likely not what you’d say loudly to a coworker while your boss is in earshot. Online, we not only communicate, we calculate—based on who we’re speaking to, or what platform we’re using, we gauge whether the information we divulge will remain solely with the people we’ve chosen to share it with. As leaks, breaches, and data collection scandals grab headlines, it’s clear that we’re often wrong. And as it turns out, it’s our very trust in technology that promises privacy and anonymity that often makes that violation worse.

“The space for existing without being searchable and findable at all times is shrinking,” Woodrow Hartzog, author of Privacy’s Blueprint: The Battle to Control the Design of New Technologies, tells Gizmodo. Online communication—be it social media, email, or blogging—is by design, archived and indexed. Speaking offline is ephemeral, and often held only in our memories. Speaking online is, increasingly, a matter of public, permanent record.

In Privacy’s Blueprint, Hartzog explains how companies manipulate our desires to remain anonymous, promising obscurity in a world where there is none. He is highly critical of what he calls in the book “hiding” technologies. These range from browsers’ Incognito Mode, which erases search histories, to Snapchat, the platform with “disappearing” messages. Both give the illusion that our actions or communications will vanish forever. 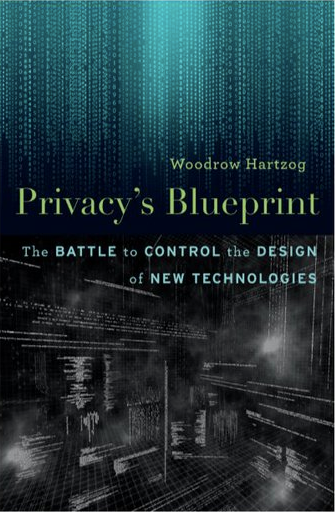 “I’m wildly in favour of hiding technologies,” he tells Gizmodo. “But, I think that we have to be very [careful] with using them. Because where hiding technologies can fail us is when they overpromise, and we rely on them in a way that is to our detriment.”

Privacy’s Blueprint discusses the case of Zeeshan Aqsar, a 19-year-old who coerced a 15-year-old girl to send nude photos over Snapchat, according to court documents. Snapchat markets itself as purely ephemeral, right down to its “ghost” mascot, but prosecutors said Aqsar used a third-party app to retain copies of the girl’s photos, demanding both money and increasingly graphic intimate photos. What he did was despicable and criminal. (He was sentenced to two years in jail for blackmail.) But the third-party app itself isn’t illegal. “Hiding” technologies work fine until matched against their counterpart: “seeking” technologies. “Seeking” technologies are designed to find and capture what we may be trying to keep private.

“The consequence of overpromising [privacy and obscurity] is significantly greater than the standard consequence for overhyping our products,” Hartzog explains, “because people rely on these high tech technologies to gauge whether they want to disclose or not and to gauge how safe they are.”

In another troubling example Hartzog raises, in 2009, Brian Pietrylo, a waiter in the US state of New Jersey, created a group MySpace page for his coworkers to talk about management. On the page, members could “vent about any BS we deal with...without any outside eyes spying in on us.” If only. When management caught word, a supervisor pressured an employee for access, ultimately firing Pietrylo for creating the page. Pietrylo sued and a jury ultimately found in both his and his employer’s favour. Pietrylo, the jury found, had no expectation of privacy, but his employer had violated state law by pressuring his coworker into giving over the password and accessing a site they weren’t invited to.

Pietrylo lost his job because he thought setting group access to “private” would make it, literally, private. He was wrong.

Whether sharing intimate images online or simply gossiping, we’re all doing the same internal calculus: what am I sharing, where am I sharing it, how likely is it that what I’m sharing will go somewhere out of my control?

Hartzog says users will naturally turn to “hiding” technologies as the power of “seeking” tech expands. (In turn, “hiding” tech companies will continue to overpromise.) Or, users will forego the risk entirely and disclose less. Meaning, they will stop sharing information with each other. Hartzog calls this a type of frighting phenomena.

“The chilling effect shows that surveillance is sort of a ‘damned-if-you-do, damned-if-you-don’t’ proposition for being fully informed,” he explains. People who aren’t fully informed will continue to over-disclose. People who are informed may decide sharing information or speaking out online isn’t worth it; they may give up and leave platforms completely. A balance must be struck, he says, between being informed and being defeatist.

GDPR is Killing Email Marketing, to the Disappointment of No One

Snap Begins Mission to Infiltrate Other Apps, Swears It Won't Screw Up With Your Data Like Facebook Did