By Jessica Boddy on at

Scientists announced that they have discovered 10 previously unknown moons orbiting Jupiter. This brings the gaseous behemoth’s total moon count up to 79.

The team, led by astronomer Scott Sheppard, first spotted some of the new moons while looking for exceptionally distant objects at the brim of our Solar System, beyond Pluto, using the Blanco 4-meter telescope at the Cerro Tololo Inter-American Observatory in Chile. Jupiter just happened to be in their view, and they noticed a handful of new objects near the planet, between just one and four kilometres in diameter. After tracking the objects’ orbits for about a year with other Chilean telescopes, in addition to some in Arizona and Hawaii, the scientists were able to confirm them as moons.

Last year, this same team announced the discovery of two other moons, which brought Jupiter’s total at the time to a very nice 69.

Two of the newly discovered moons orbit close to Jupiter—thought not as close as the large, Galilean moons: Io, Europa, Ganymede, and Callisto. These moons are “prograde moons,” meaning they orbit Jupiter in the same direction the planet spins. Because their orbits put them near other prograde moons, they’re thought to be bits of a larger moon that was broken apart by a collision long ago.

Seven of the new moons orbit a bit further out, and in the opposite direction, making them retrograde moons. There’s a throng of other retrograde moons in that further-out region, which fall into three distinct groupings of similar orbits. The researchers think those three groups were once three larger moons that were also broken apart by collisions.

And then there’s the tenth moon—the oddball. It orbits in the same general path as all of the retrograde moons, but in the opposite, prograde direction. Sheppard told Gizmodo that it could be a remnant of some random object in the Solar System that got sucked in by Jupiter’s gravity—like a rogue comet, for example—which smashed into some of the retrograde moons, and broke them into the many that orbit the gas giant today.

Though that errant object no longer fully exists, the oddball moon could be a fragment of it. The team proposed the name Valetudo for this moon in the kooky orbit, after the Roman god Jupiter’s great-granddaughter, according to the release from the Carnegie Institution for Science. 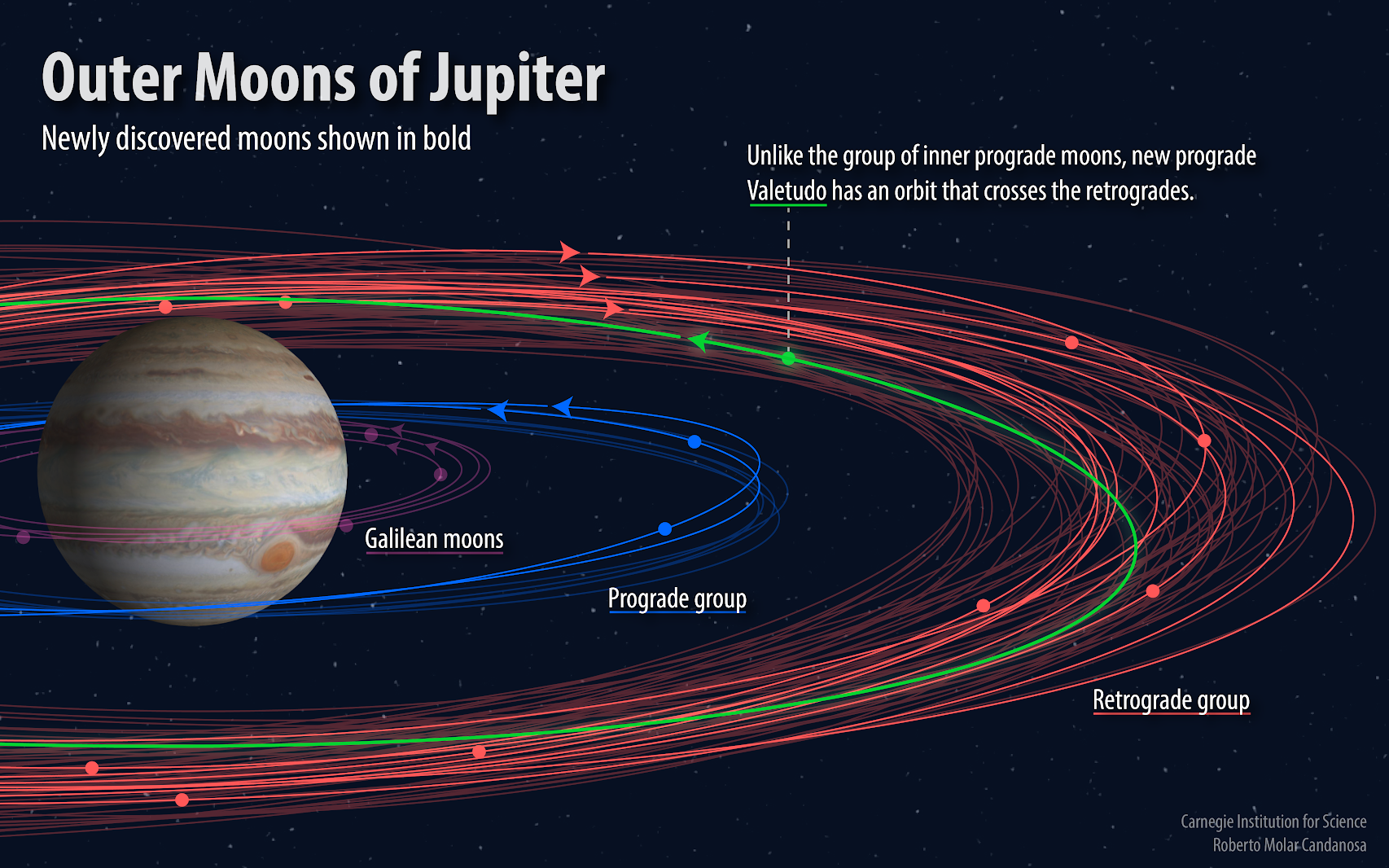 “This just shows how chaotic our Solar System was in the past. These outer moons of Jupiter are remnants of chaos,” said Sheppard. He also added that Valetudo is bound to hit something again in the future and be ground to dust. “It’s like driving a car on the wrong side of the highway.”

The reason these moons are just being discovered now is because telescope technology has improved so much over the last decade or two, Sheppard told Gizmodo. Astronomers can take bigger, higher-resolution pictures and are less affected by glare and scattered light from planets.

“There’s been somewhat of a technology barrier,” Sheppard said. “Jupiter is a big planet, and there is a big area of sky around it to survey and find all of its various moons. Now, we can take four big pictures and see everything around it. But in the early 2000s, it was like looking through a straw.”

Alycia Weinberger, an astronomer also from Carnegie who wasn’t involved in the new discovery, agrees with Sheppard.

“Just a few years after the first moons were discovered, people started finding many more all the time,” she told Gizmodo. “That suggests that there are more lurking there. As things get smaller they get harder to detect. I think we would be foolish to ever think we know everything.”

Additional moon discoveries could help reveal more about the history of Jupiter and other gas giants, because moons are often a window into how a planet formed.

Jupiter, for example, formed in a spinning disc of dust; gravity caused a bunch of mass to compact together and create various rocky and gaseous objects there, which eventually smashed together to create the gas giant we know today. But some leftover junk from Jupiter’s birth that didn’t get sucked into the planet continued to orbit in the original direction of the disc, and what would be come the eventual spin direction of Jupiter. Those are prograde moons.

The team thinks that Jupiter’s retrograde moons, however, are mostly made up of a passerby objects from elsewhere in the Solar System that Jupiter vacuumed up and captured with its gravity.

Understanding moon-planet relationships like this one could be especially useful for studying other solar systems and exoplanets. Scientists discovered the first exomoon just last year.

“[Exoplanet moons] could potentially tell us how an exoplanet formed, and either how quiet or violent the planet-forming process was,” said Weinberger. “If certain collisions happen here, they happen in other systems.”

No matter the case, moons of any kind are worth paying attention to.

“This all folds into learning about how solar systems work, and how small bodies in solar systems buzz around,” principal investigator for NASA’s Juno spacecraft Scott Bolton, who was not involved in the discovery, told Gizmodo. “It’s always exciting to discover new moons or any bodies that are a part of our Solar System.” [Carnegie Institution for Science]