Our limited human eyesight can really constrain our understanding of the universe. We can see only a thin swath of light’s wavelengths, those waves with peaks 390 to 700 nanometres from crest to crest. This means we miss any light-emitting details coming from other wavelengths, such as from radio and microwave light, as well as infrared, ultraviolet, and x-ray.

Scientists have released new views of Saturn’s largest moon, Titan, taken by the Visual and Infrared Mapping Spectrometer (VIMS) instrument on the decommissioned Cassini spacecraft. They represent lots of data that has been combined and smoothed out, and they show a clear view of what the moon looks like under its dense atmosphere.

The centre, yellow image shows how Titan would look to human eyes. Around it are the six new infrared representations, rendered in colours that human eyes can see. Each colour (red, green, and blue) represents a ratio of the brightness of two different infrared wavelengths. This method is meant to highlight the materials that comprise the moon’s features while reducing image artefacts from combining the raw files. More about that here. 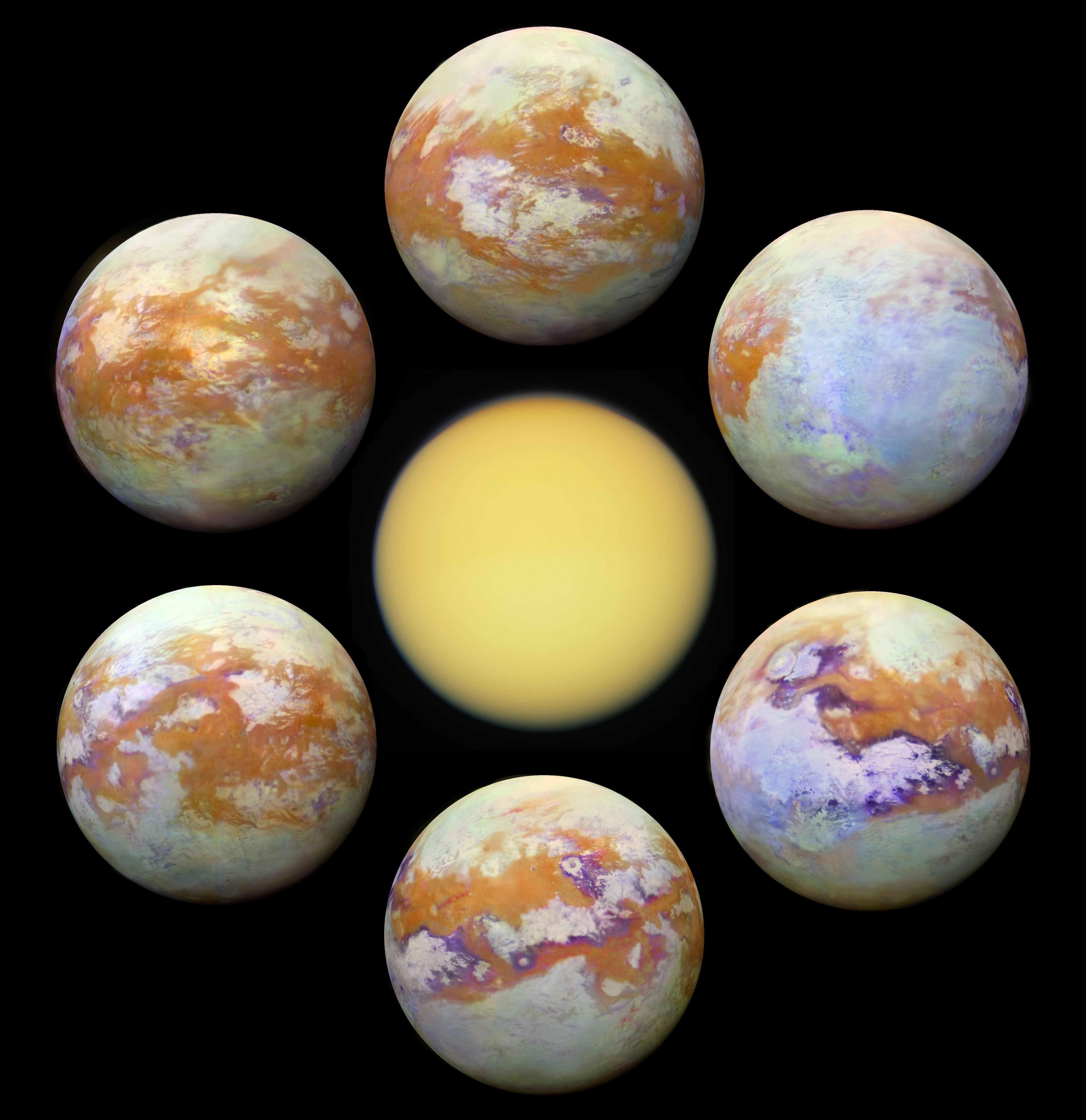 The VIMS instrument records the infrared wavelengths of light that aren’t scattered by Titan’s particle-filled atmosphere the way visible light wavelengths are. It’s sort of like putting on a pair of red-filmed glasses to decode a secret message. But decoding this message required many observations from Cassini stitched together, according to a NASA release. And Titan looked different each time Cassini passed over, with different levels of sunlight or changes to the planet’s atmosphere over time, requiring extra effort to make these seamless views.

The images show the complex surface of Titan hiding beneath its atmosphere. We already know this moon is a strange place—it’s 50 per cent larger than Earth’s moon, and has liquid hydrocarbon oceans at its surface with rivers, lakes, and even methane rainstorms.

Some have even speculated that the carbon and nitrogen in the moon’s atmosphere might be the building blocks for a strange Titan biology.

Nearly a year after Cassini’s final plunge into Saturn, its data continues to yield awesome science. Now maybe it’s time for our scientific probes to pay Titan, or other potentially life-containing moons, a visit. [NASA]