Turns Out That Football Putin Gave Trump Has an NFC Chip in It, But It's Probably Harmless

While at a conference alongside Russian President Vladimir Putin at a high-profile conference in Helsinki this month, Donald Trump took some time out of relentlessly praising his counterpart—a former KGB foreign intelligence officer and currently suspected US election-meddler—to accept a gift of one Adidas AG football. Turns out that model of football has a chip in it.

Per a report in Bloomberg, said football carries markings identifying it as part of a line with a built-in “chip with a tiny antenna,” albeit one ostensibly designed by Adidas, not a basement lab at GRU headquarters. The contained NFC chip is “passive and only sends out information,” according to the Adidas website, and is marketed as allowing fans who bring their mobile devices close to the ball access to premium content like exclusive videos, competitions, and challenges.

But rather than a spy device, the chip is an advertised feature of the Adidas AG ball. Photographs from the news conference in Helsinki, where Putin handed the ball to Trump, show it bore a logo for a near-field communication tag. During manufacturing, the NFC chip is placed inside the ball under that logo, which resembles the icon for a WiFi signal, according to the Adidas website.

The chip allows fans to access player videos, competitions and other content by bringing their mobile devices close to the ball. The feature is included in the 2018 FIFA World Cup match ball that’s sold on the Adidas website for $165 (reduced to $83 in the past week).

In other words, this isn’t necessarily an indication of anything nefarious. Putin may well have simply given the president an off-the-shelf Adidas ball that does nothing more than transmit a code unlocking dumb premium content that, in all likelihood, neither the president or anyone else has an interest in unlocking. Per CNN, cybersecurity expert Scott Schober noted that any mobile device would likely need to be “within a couple of centimeters” of the ball to even register the code, while Adidas claims the encoded tag is impossible to interfere with.

However, that is assuming that the ball was not surreptitiously fiddled with, such as by replacing the NFC transmitter with a near visually identical device of Russian origin, somehow modifying it, or just creating a fake ball. As Bloomberg helpfully noted, it “it couldn’t be determined from the photos” whether the ball was modified, because duh.

That would be brash by intelligence standards. As Schober told CNN, any device brought into close proximity to the president would be examined by the Secret Service or counterintelligence officials to see if it emitted “any radio frequency”—and even given Trump’s suspiciously friendly relationship with Putin, it seems like a stretch the latter leader would be so brazen as to hand the president a bugged device personally. So cue the cries of “fake news!” and all that.

That said, the Cold War is rife with stories of Soviet intelligence ingenuity, including a replica Great Seal of the United States containing a sophisticated, pencil-sized resonating device they gave US Ambassador George Kennan in 1952. Dubbed “The Thing,” its operation—powered by KGB technicians in a nearby building who targeted it with microwaves—was only discovered when a British radio operator heard Kennan’s conversations being broadcast on an open channel.

Bloomberg concluded that one kind of attack, in which the NFC chip could be modified or replaced to redirect a user to a malicious URL, is probably not happening:

However, such a multi-stepped attack via a soccer ball seems unlikely, said Linus Neumann, a spokesman for the Hamburg-based Chaos Computer Club, a hacker collective that for decades has exposed weaknesses in German banking, government and other computer systems.

“Trump would have to ignore multiple security warnings and intentionally install a malware on his device,” Neumann said, adding that such a hack working would depend on the president, “falling for a silly attack like this.”

In one sense, that’s ominous, given the American president does not know how cybersecurity works and is basically the number one guy who would fall for something “silly.” But in another sense, it’s reassuring, given the near certainty Trump does not know how to install an app on his phone. 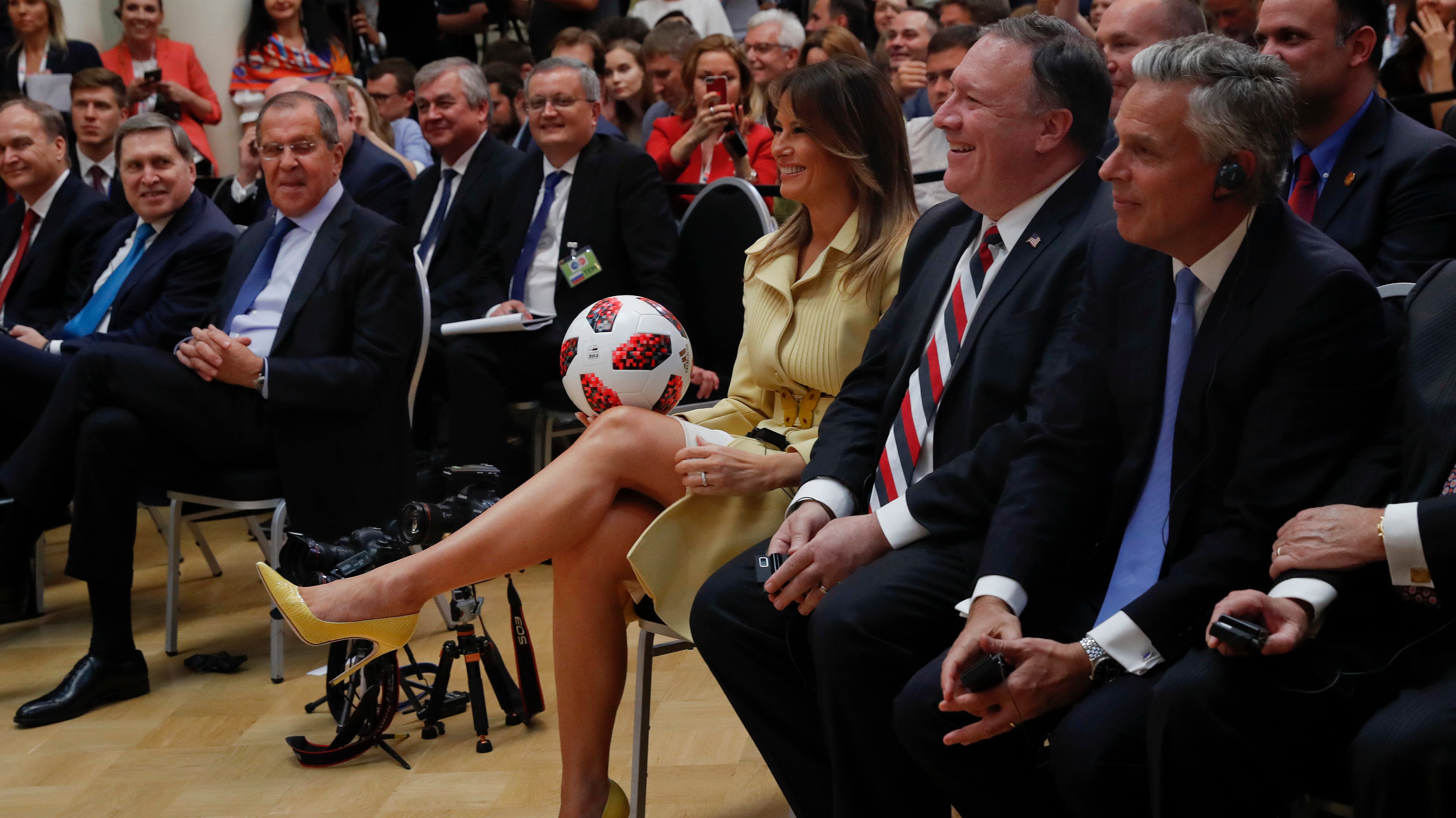 First lady Melania Trump holding the ball after it was tossed to her by her husband. (Photo: Pablo Martinez Monsivais/AP)