Comic From 1913 Predicted Innovations for Newspapers of the Future

A lot of things were supposed to kill newspapers in the 20th century. There was radio, then TV, then the internet. Somehow newspapers have survived, in one form or another. But it’s still interesting to take a look at the predictions that people of yesterday had for how the news business would change. Like this comic strip from 1913 about the newspaper of tomorrow.

The 20 August 1913 edition of the St. Louis Post-Dispatch reprinted a cartoon from the London Chronicle about the newspaper of the future. And it serves as a fascinating snapshot of an era when automobiles were still relatively new, powered flight was just a decade old, and broadcast radio was still for early adopters. 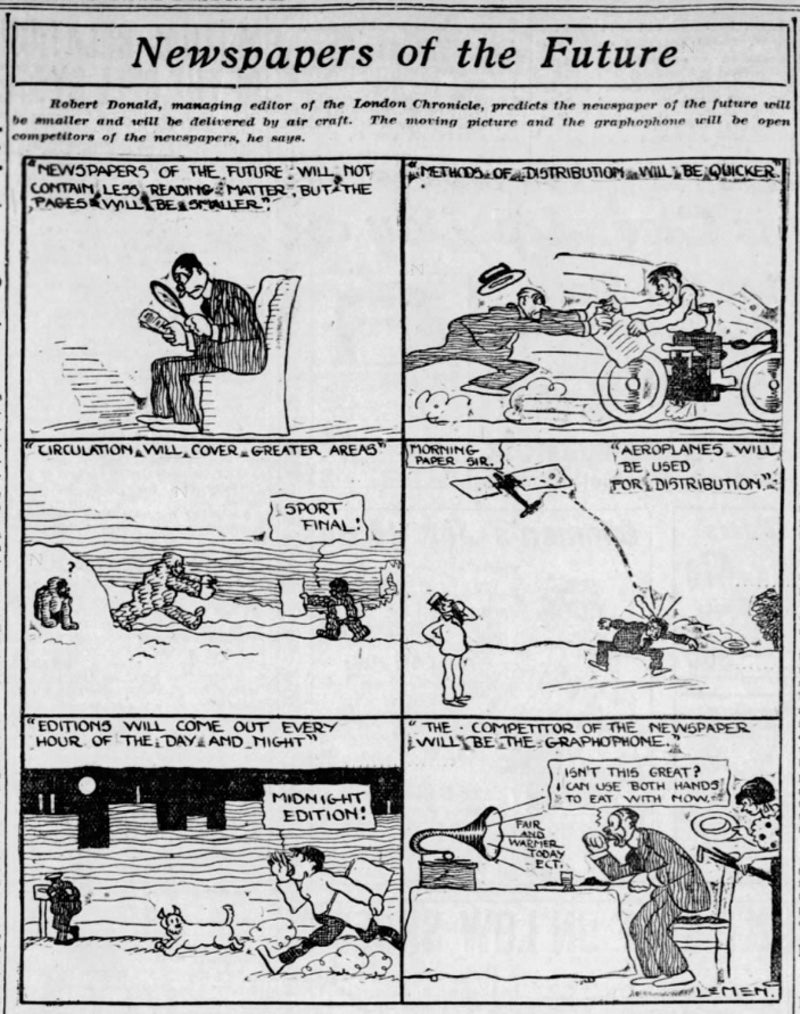 The first two panels of the six-panel comic strip explain that the newspapers of tomorrow will be smaller and yet contain just as much news as before. And the method of distribution will become much quicker, thanks largely to the use of cars. By the third panel, the comic jokes about the spread of newspapers to incredibly remote areas, and then talks about the use of aeroplanes for delivery.

By the fifth panel, we see a newspaper boy shouting about a “midnight edition” of the paper, because the editions now come out every hour of the day and night. At the very end, the newspaper is extinct, having been replaced by the “graphophone,” an improved version of the phonograph, which was invented in 1895.

And while the comic is clearly meant to be taken lightly, there’s a lot of truth to all of it. As early as 1922, hobby radio magazines were predicting that radio would become the dominant medium for news. And while the comic doesn’t mention radio, there was recognition that audio broadcasts (in this case, presumably carried on physical media) would be a fantastic way to deliver the news. The panel about newspaper editions being delivered “every hour of the day and night” wasn’t too far off either, even before the invention of the internet.

Of course, the dawn of the internet brought some radical predictions for the future of news as well. In 1994, newspaper company Knight Ridder predicted that people would read newspapers on tablets—an incredibly prescient idea that would have seemed silly until the introduction of the iPad in 2010.

Predictions like these are intended to be jokes, of course, in one form or another. But jokes are often the best way to communicate our greatest hopes and darkest fears for the future. More often than not, they look pretty damn reasonable a century later. [Newspapers.com]