Humans May Have Reached North America by More Than One Route

There’s an ongoing debate among archaeologists as to which route the first settlers of North America took to reach the continent. Some say these migrants travelled along an interior passage between two massive ice sheets, while others say they traversed along a coastal route. New research suggests both interpretations are correct, and that multiple pathways into North America existed by the end of the last Ice Age.

Several conflicting theories currently describe the peopling of Americas, of which two are vastly more plausible than the others, according to new research published last week in Science Advances. These two theories include the conventionally argued, but often maligned, Ice Free Corridor route, in which the first migrants crossed over from Beringia into the interior of Alaska, and then into the high plains of North America by venturing through two massive ice sheets around 15,500 to 13,500 years ago. The other is a newer hypothesis known as the North Pacific Coast route, also called the Kelp Highway Hypothesis, in which America’s first settlers arrived by hugging the coastline along southern Beringia and North America’s west coast, no earlier than about 17,000 years ago.

Rather than choose one hypothesis over the other, a research team led by Ben Potter from the University of Alaska Fairbanks claims that America’s first settlers could have used either the Ice Free Corridor or the North Pacific Coast route, and that it’s entirely possible that both pathways were used. As the title of the new paper suggests, “Current evidence allows multiple models for the peopling of the Americas.”

To reach this conclusion, Potter’s team evaluated recent claims and discoveries made by archaeologists, anthropologists, geologists, and geneticists, concluding that both the Ice Free Corridor route and the North Pacific Coast route should be considered viable migration routes, and that both warrant further study.

“What we wanted to do is to evaluate this claim and really provide a framework to discuss the peopling process—not based on speculation but rather on a careful and critical review of the current evidence we have,” said Potter during a press conference earlier this week. “Rather than confusion, there really is growing congruence of the archaeological record, the palaeoecological and the genetic records.”

This evidence, according to the new study, suggests the ancestors of indigenous Americans split from East Asians around 25,000 years ago, followed by a prolonged period of genetic isolation, a theory known as the standstill model.

“One point that we wanted to make in our paper that often isn’t out there in the press is that the standstill model really only requires that the Native Americans are not exchanging genes with their East Asian relatives at this time,” said Potter. “It says nothing about where exactly that isolation occurred. And some people have said, well, maybe it’s in Alaska. And I think all the available evidence now suggests that the standstill likely occurred somewhere in Northeast Asia, where we actually have evidence of people at that time.” 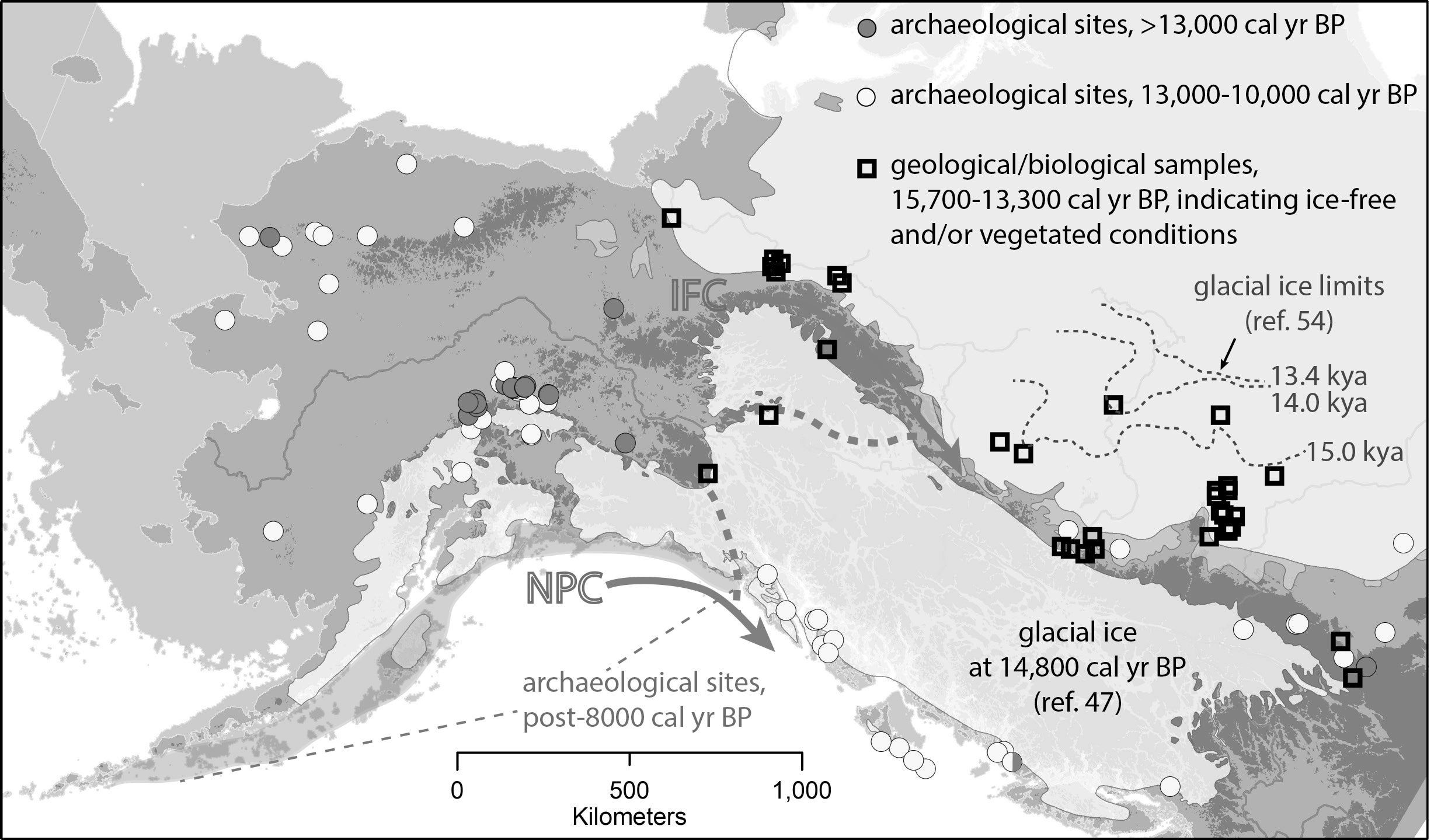 Following this phase, a population expansion occurred between 16,000 and 14,000 years ago, which corresponds to archaeological sites in the Americas. Recently, some scientists have argued against the interior route, saying it did not exist during this time period or that it wasn’t conducive to human habitability (the ice-free corridor became habitable around 12,600 years ago, several thousand years after the coastline opened up). Potter’s team disagrees, pointing to a slew of recent studies affirming the timing and presence of an ice-free corridor.

“The last deglaciated part—the bottleneck—was ice-free and glacial lake free by at least 15,000 years ago,” said Potter. “So some recent studies have provided minimum dates on viability based on lake core DNA or bison DNA analyses, and these are around 12,600 to 13,100 years ago.” These are minimum dates, said Potter, and the interior corridor could have opened up even earlier. Regardless, he said the Ice Free Corridor theory is far from dead.

Archaeological evidence is stronger for the interior route, but the authors say there are good reasons to believe that a coastal migration route also existed. New research published this past May, for example, showed that four islands along the Alaskan coast were free of ice around 17,000 years ago, and that these areas were capable of supporting human life (this was based on geological work and the discovery of animal bones). In March, scientists announced the discovery of 29 human footprints buried on the shoreline of Calvert Island in British Columbia dating to around 13,000 years ago (a neat find, but these prints appeared thousands of years after the coastline opened up).

Indeed, archaeological evidence for the North Pacific Coast route is practically non-existent. The earliest occupations from the Aleutians to Yakutat Bay in Southeast Alaska are dated at around 8,000 years ago, which is 6,000 years after the earliest interior occupations. What’s more, these coastline-hugging humans used technologies derived from the traditions of people living in the interior. Data is lacking for the northernmost areas of the proposed coastal route, and we don’t know how lingering ice, ongoing volcanism in the region, the stability of kelp, or other factors may have made the coastal route dangerous or unfit for human occupation.

Alia Lesnek, a PhD candidate in the Department of Geology at the University at Buffalo who wasn’t involved in the new study, said the new paper provides a balanced analysis of the current ideas about how humans first colonised the Americas.

“I agree with the authors that the jury is still out on how the Americas were colonised,” Lesnek told Gizmodo. “We have evidence from the coastal route that suggests it may have traversable by humans as early as 17,000 years ago, but we haven’t found Pacific coastal archaeological sites that predate 13,000 years ago. On the other hand, a number of inland archaeological sites have been discovered, but there is still some disagreement among geologists about when the ice-free corridor could have supported a migrating human population.”

“Of course, the authors also point out that coastal and inland migrations are both possible, and that one hypothesis doesn’t necessarily conflict with the other, and I agree with them there as well,” she added. “[We] need perspectives from geology, ecology, archaeology, and genetics to ultimately resolve this question.”

Christiana Scheib, from the Department of Archaeology and Anthropology at the University of Cambridge, said it’s important to point out that the new paper is a review article, and that the authors didn’t provide any new data. What’s more, she said the authors failed to cite some recent genomics papers, which could provide more information about which groups were involved in the migration(s) and the timing of these events. It’s also clear, she said, that that the data was presented in a way that promotes the inland corridor over the western coastal route.

“They are correct that perhaps we shouldn’t put the inland corridor ‘to bed’ just yet, but it’s not like this review is paradigm shattering,” Scheib told Gizmodo. “They are mostly using archaeological data to support their points because we don’t have much else at this time.”

Like Lesnek, Scheib said we need more evidence to be certain.

“My professional opinion is that if we actually want to test which of these hypotheses is true, we need more data—and it should be combining archaeological, climatic, and genetic—and it needs to be systematic,” she said. “At the moment we are forced to cobble together puzzle pieces from disparate sources and there isn’t congruity between methods used at various sites, so it’s hard to say what is really comparable and what isn’t.” [Science Advances]