New research into the migration habits of Tawaki penguins has revealed an absolutely marathon trek in which these aquatic birds travel upwards of 1,550 miles (2,500 kilometres) from home, sometimes swimming as much as 50 miles (80 kilometres) per day to reach their feeding sites.

The research team, led by Thomas Mattern of the University of Otago, used satellite transmitters to track 17 Tawaki penguins (Eudyptes pachyrhynchus) native to New Zealand along an epic journey. Departing from the west coast of New Zealand’s South Island in mid-November, the penguins fed at sea for about eight to ten weeks, returning with their bellies full of fish. With their appetites satiated, the birds entered their moulting phase and prepared to rear chicks.

Over the course of their migration, however, the penguins zig-zagged their way in a southwesterly direction, swimming anywhere from 2,175 miles (3,500 kilometres) to 4,225 miles (6,800 kilometres) in total. The birds travelled between 12 miles (20 kilometres) and 50 miles (80 kilometres) each day, which the researchers say is probably as much as they can physically handle.

The migration took the birds towards the Southern Ocean—nearly half-way to Antarctica and some 1,550 miles (2,500 kilometres) as the crow flies from their starting point. This is now the longest known migration of any penguin species during its annual cycle (i.e. after they breed but before they moult), the details of which were published this week in PLoS One. 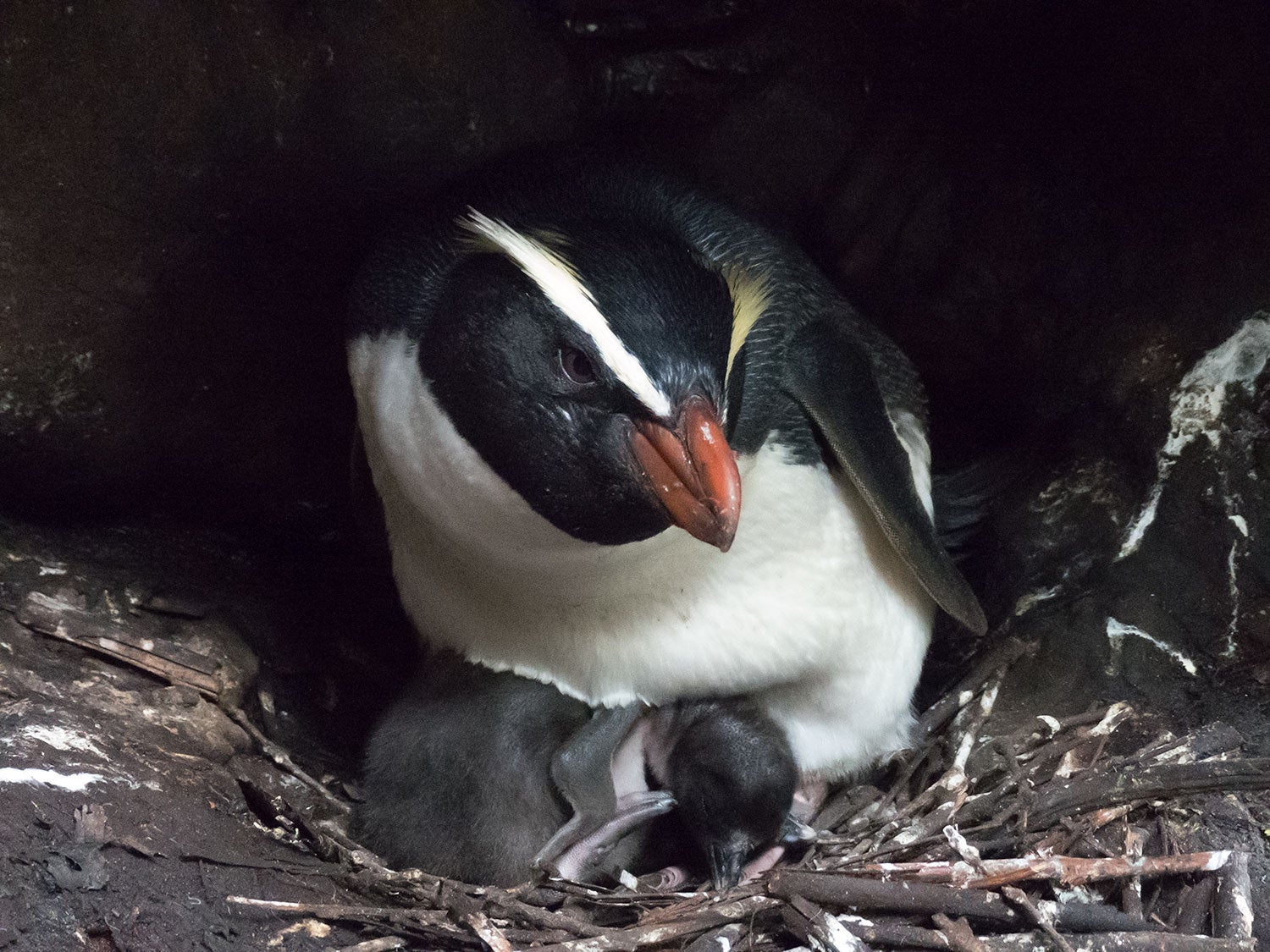 For comparison, Rockhopper penguins (which are about the same size as Tawaki penguins) tend to say within 370 miles (600 kilometres) of their breeding sites, and the larger Macaroni penguins stray no further than 560 miles (900 kilometres) from their embarkation points. Even the imposing Emperor penguins don’t travel more than 930 miles (1,500 kilometres) before making landfall.

For the study, Mattern’s team attached satellite transmitters to 10 male and 7 female adult Tawaki penguins, whose movements were recorded from November 2016 to March 2017. While several penguins lost their receivers, making the data incomplete, those that retained them travelled southwest from their colony towards one of two feeding grounds, a location south of Tasmania near the subtropical front, and one further south near the subantarctic front. Penguins that left the colony early (usually because they didn’t have any chicks to take care of), tended to travel towards the subtropical front, making journeys that were about 450 miles (750 kilometres) shorter on average. Those penguins that left late due to parenting demands had to swim faster to reach the more distant subantarctic front feeding grounds (ah, to be a parent).

But these journeys are as impressive as they are perplexing. So-called catastrophic moulting—in which penguins generate thousands of feathers over three weeks while fasting—and breeding are energy demanding processes. So the researchers reasonably assumed the Tawaki penguins would try to conserve energy by not travelling any further than they needed to. Routes taken by the penguins on their epic treks. (Image: Thomas Mattern et al., 2018/PLoS One)

“The conditions closer to the New Zealand mainland are pretty good,” Mattern told Gizmodo. “There are no obvious reasons why Tawaki would have to travel as far as they did—there is no logical explanation for it.”

Mattern has a theory, though. He suspects this behaviour is a remnant from an ancestral penguin species that evolved further south in the sub-Antarctic region before making the New Zealand mainland its home. Perhaps the penguins are following an instinct that’s telling them to go to the subantarctic front because it’s a productive area.

This might also explain why the Tawaki breeding range is clustered along the southern coastlines of New Zealand. Yet, at least from this study, the roundabout migratory route doesn’t seem to be affecting this species too negatively.

“The pre-moult journeys are often described as the most crucial period in the annual life cycle of penguins,” said Mattern. “It comes after an energy demanding breeding period and right before an even more energy demanding catastrophic moult....if they don’t find enough food during this trip, they may not survive the three-week-fast combined with production of 150,000 new feathers during the moult.”

The fact that some Tawaki penguins were able to accomplish their massive journey suggests they finished the breeding season in tip-top shape. Those that were tracked all the way home seemed to return in good condition. However, the sample size here represents an important limitation.

The 17 birds the researchers tracked all hailed from a single colony, and some of this data was incomplete due to lost receivers. Of the 17 birds that embarked upon the journey, nine were tracked until they started to head home, and only five were tracked all the way. What’s more, the team only has data from a single year. More years of research and more penguins tracked would strengthen the researchers’ findings and allow them to determine the exact attrition rate of the Tawaki migration.

Currently, Mattern’s team is tracking 48 Tawaki penguins with tiny data loggers over the course of an entire year. Once they get these devices back, the researchers will know if the trips they recorded with the satellite trackers in 2016 were out of the ordinary or not.

“However, I would be surprised if that were the case,” said Mattern. [PLoS One]