The Rosetta orbiter ended its mission in September 2016, but science fans continue to unearth and reprocess some of its incredible images of comet 67P/Churyumov-Gerasimenko. Check out this one, above.

Amateur astronomer Stuart Atkinson cropped and processed this image from the European Space Agency’s archive to make it feel as though you’re standing right on the comet’s surface. He began with a raw image, below, of the comet’s “Bes” region, which the Rosetta spacecraft photographed with its OSIRIS camera on 10 February 2016. 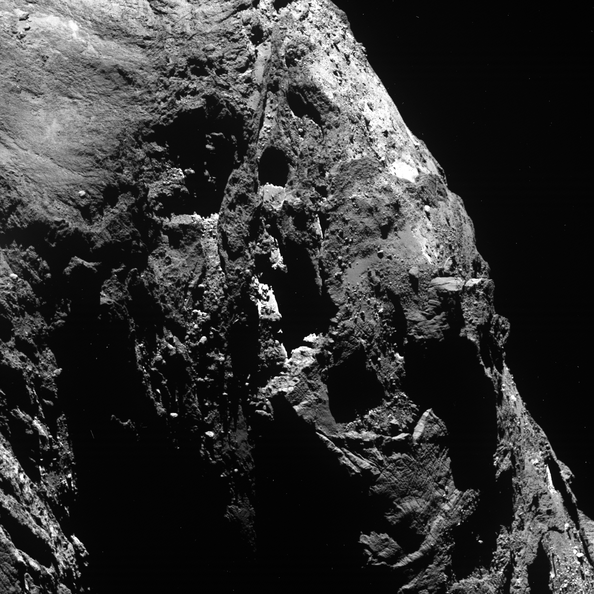 Rosetta took thousands of images of duck-shaped 67P/Churyumov-Gerasimenko while it gathered data. Only a few have been cleaned up to look nice for the public, but you can find plenty of awesome shots via the ESA image archive.

In fact, there are a tonne of free images out there just waiting for someone to process them. Here are raw images of Saturn taken by Cassini, for example; then there’s Mars imaged by Curiosity, Opportunity and HiRISE; Jupiter, as seen by Juno’s JunoCam; the Moon, snapped by the Lunar Reconnaissance Orbiter; Pluto and beyond from New Horizons; and other data from NASA’s Planetary Data System. Generally these images appear warped or contain artefacts from the camera or movement of the spacecraft that the artist must remove.

As a note, these files are often stored in the common astronomical data file format .FITS, so you’ll need software like the FITS Liberator if you’d like to open them.

Spacecraft gather data, but it’s up to humans to turn it all into images that look nice. It’s a hobby worth picking up, because the results can be spectacular.