Scientists Put Paint on Ants to Study How They Form Societies

Ants can do pretty amazing things when they work together, like building elaborate nests and even creating bridges from their bodies. One team of scientists wanted to know how these social insects figure out how to take on their various roles within a colony.

Given that “survival of the fittest” is how we think of evolution, it can seem a little strange that some creatures (like ants and humans) thrive in groups. Hoping to understand this, researchers led by Yuko Ulrich from The Rockefeller University studied behaviour in increasingly large groups of ants to learn how division of labour emerges. Eventually, studies like these could even help us understand our own human behaviour.

“Even though we work with genetically identical individuals that are as homogeneous as you can get them, there still seems to be some variability between them in terms of their tendencies,” study corresponding author Daniel Kronauer from The Rockefeller University told Gizmodo. “Where do these differences come from?” 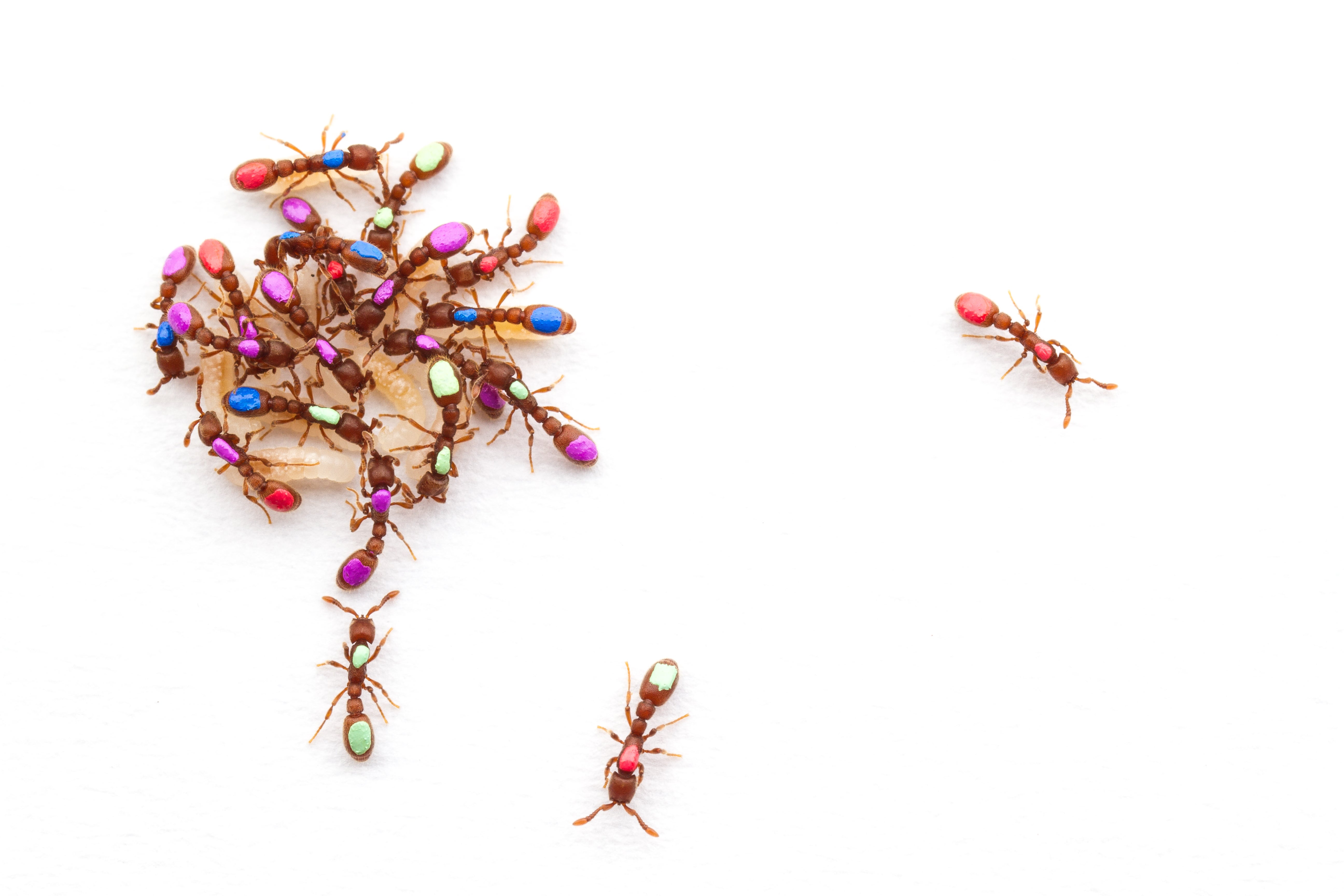 The researchers observed the behaviours of clonal raider ants, an especially useful species for a study like this. The ants don’t have a queen and reproduce clonally, meaning female ants lay eggs that don’t need to be fertilised to produce more female ants.

Studying lots of nearly genetically identical individuals isn’t easy, so the researchers developed a tracking system in which they marked the ants with paint dots and filmed the colonies so a computer program could track the behaviour. They observed seven to eight colonies, each of one, two, four, six, eight, 12, or 16 worker ants with an equal number of larvae. They measured how much time the ants spent around the nest and how consistent that behaviour was. This can serve as a proxy for behaviours like foraging and nursing the larvae.

For groups with as few as six ants, individuals began behaving differently from one another. But perhaps even more surprising was that, it appeared that larvae developed into adults sooner the larger the group was, according to the paper published in Nature. Faster larval development is considered a measure of fitness, the researchers say.

“We provide the same amount of food per larva, there’s nothing different other than the group size,” Kronauer said. “That’s something I hadn’t expected.” 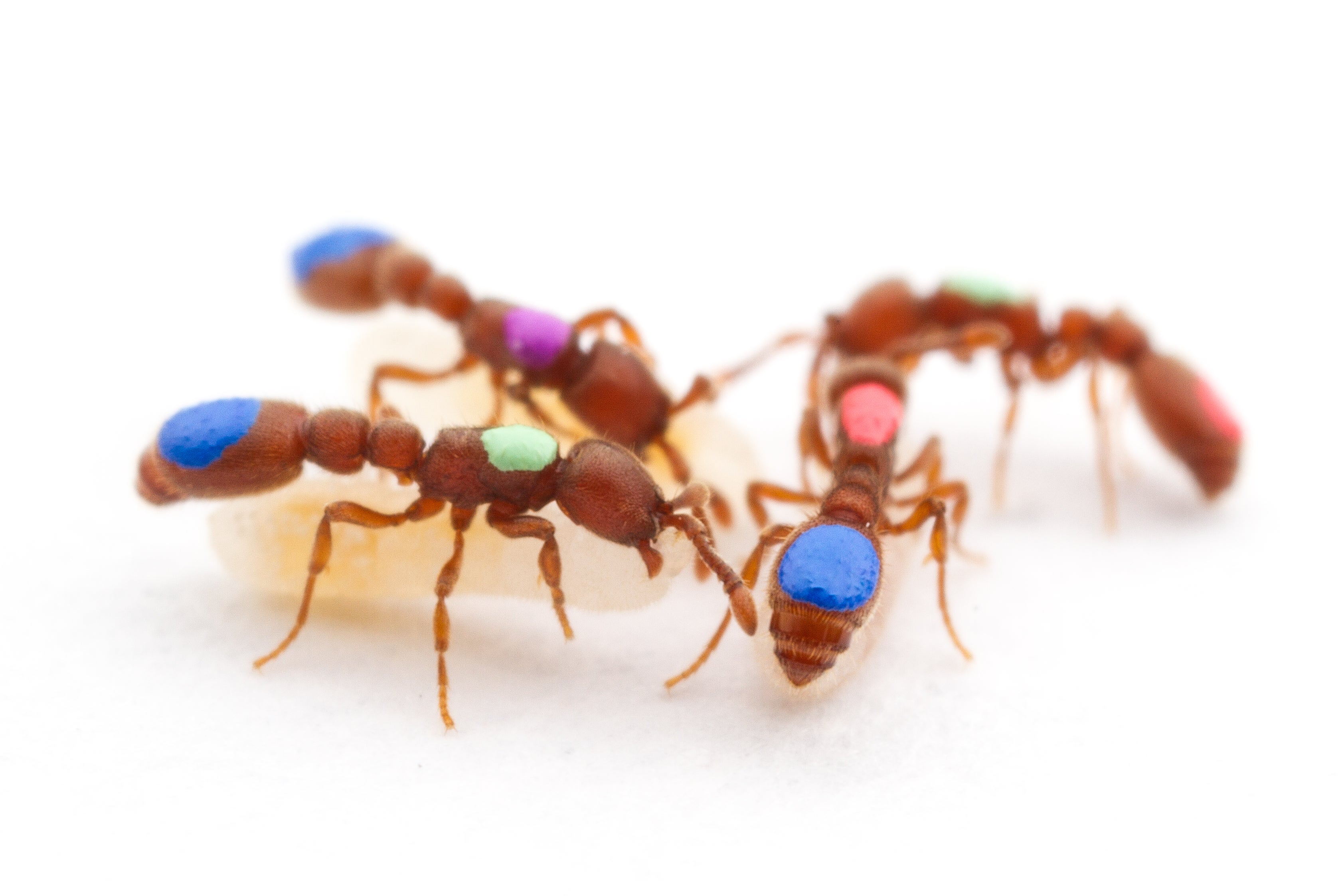 One scientist not involved in the research, James O’Dwyer at the University of Illinois, said he thought it was a cool experimental setup and an interesting way to track behaviour. He pointed out that there were more questions he’d want answered in future experiments, like whether more variation in behaviour alone, rather than group size, speeds up the larval development.

An inherent limitation to a study like this, and a comment Kronauer expected to hear from more ecology-minded researchers, would be that this test was performed in a lab, rather than in the ants’ natural environment. But Kronauer said he’s not as interested in the ants’ natural behaviour, and instead hopes to create a fully controllable system to learn more about the fundamental nature behind social behaviour development.

These are ants and not humans, so any comparison between the two has its limits. But the study is getting at a deeper question of how social behaviour evolves. “We are a social species also,” said O’Dwyer. “Understanding exactly what the benefits and difficulties are in the division of labour... has its implications for all aspects of sociality.”