Netflix’s Voltron: Legendary Defender has spent the past few seasons wildly expanding the scope and scale of its story, and the universe the Voltron Force is destined to defend. Its newly-released seventh season—its penultimate instalment—deftly narrows the series’ focus to a more personal level as the Paladins return to Earth, but it occasionally slips up.

The seventh season of Legendary Defender (returned to the usual 13-episode run the show has avoided for the last couple of seasons) can pretty much be split into two, slightly uneven halves. Set three years after Voltron defeated the maniacal Prince Lotor at the end of season six (thanks to some time-travel elements in that season’s climax, what passes as moments for Voltron ends up being much longer for the rest of the galaxy), the first six episodes of the new season see the team slowly making their way back to Earth, in an attempt to regroup and resupply after finding themselves on their own. After the self-seriousness imbued by the conflict with Lotor recently, this crop of episodes lets Voltron return to some of its less serialised, goofier moments.

The premiere episode cuts between flashbacks to Shiro and Keith’s past (more on that later) with Coran and the rest of the Paladins running off and getting randomly shrunk to tiny sizes on their quest to find energy to recharge Voltron. There’s even plays on classic sci-fi scenarios like an episode dedicated to the team being lost in space, trying to stick together and survive as they find themselves drifting away from their Lions. There’s even, out of nowhere, an incredible weird Family Feud homage where the Paladins are plucked out of space and time by a random god to partake in a game show with Haggar, Lotor, and Zarkon. (This is also, bizarrely, the only time these antagonists show up—remember Sendak, one of Zarkon’s mid-tier goons? He’s the actual villain of the season.) The moment is as hilarious as it is just flat-out random. The space road trip vibe of this batch of episodes is fun, but beyond that, there’s little in the way of consequence or character work in them so they end up feeling like an appetiser for the real main course. “The Feud!” is one of Voltron’s weirdest comedy episodes in a while. (Image: Netflix)

That main course—the wild and epic back seven episodes of the season—is at the very least worth the charming but relatively inconsequential opening episodes. It sees the Paladins finally make their way home, only to discover that in their time away a rogue faction of Galra lead by Sendak has invaded the planet, levelled the vast majority of it, and enslaved of most of what’s left of the populace—outside of one pocket of resistance saved by Pidge’s dad, Sam, who was shipped back to Earth after reuniting with his children in season 5. Womp womp!

This conflict of liberating their vastly underprepared home from the might of a Galra fleet makes for an arc that is perhaps Voltron’s biggest so far. Even though the scope is winnowed down to the fate of a single planet instead of the entire universe as it had been in their scrap with Lotor, the fact that this is Earth, and we get to follow the fight for it all the way through—from the haunting initial invasion to the team’s arrival, to the eventual victory that liberates the world—adds a personal stake for the Paladins that further enhances excellent nonstop action of an alien occupation.

By actually spending time presenting how dire a situation Earth is in—from its insufficient technology to the overwhelming brutality of Galra tactics—across these episodes, it makes the conflict resonate a lot more than even the grandest of the interstellar scraps Voltron has presented in its most recent seasons. It feels brutal and exhausting to go through (in a good way!), because we’re given seven whole episodes to deal with the matter, instead of it being consigned to a two-or three-parter. 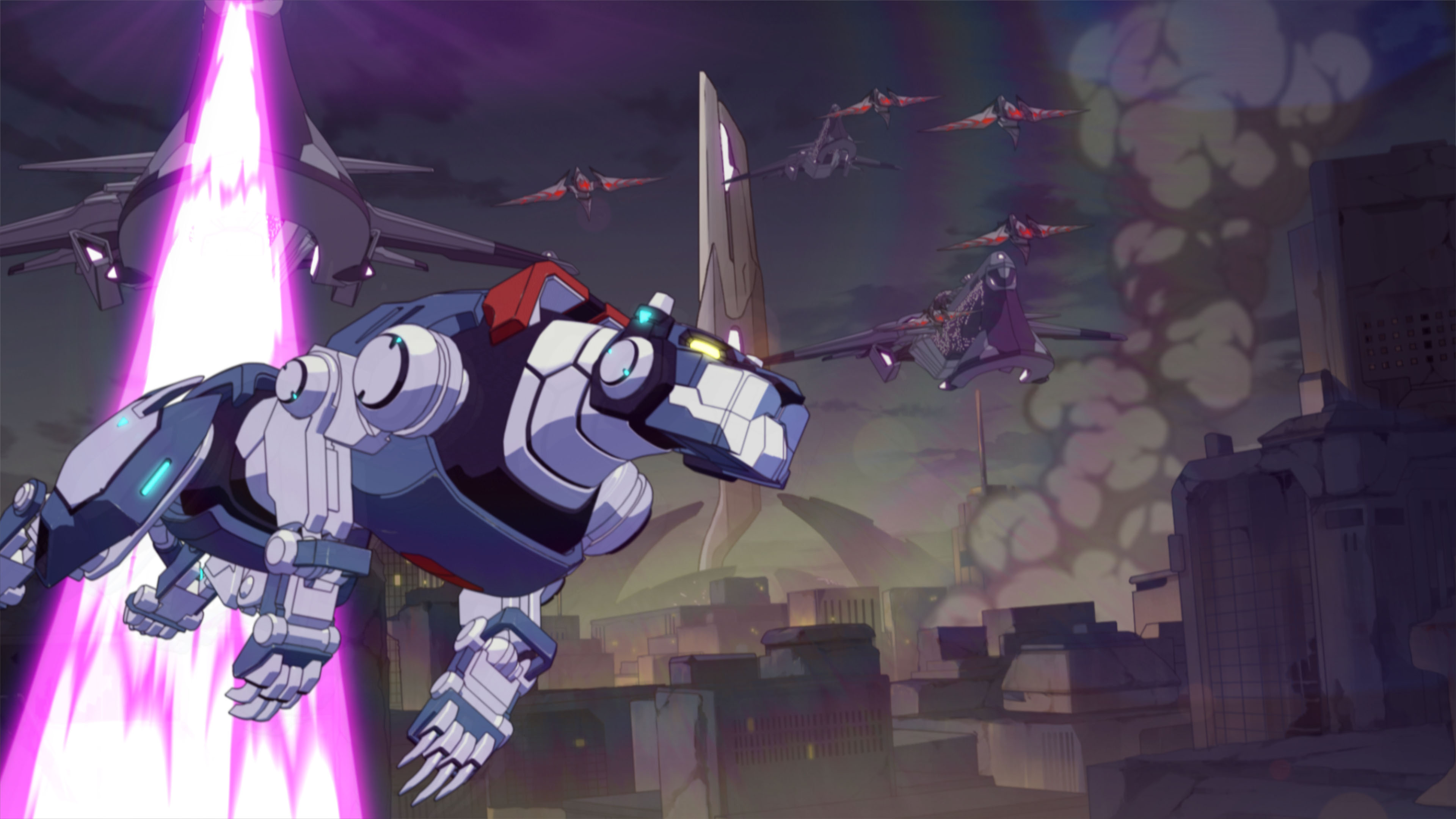 The invasion of Earth leads to some of the biggest and best action sequences the show has ever done. (Image: Netflix)

But while the action of these episodes is the best the series has ever done, it mostly comes at the cost of compelling character arcs beyond the basic matter of the Paladins being sad their home has been invaded. Shiro and Keith get the most focus (and even then, it’s very slight in both cases), but in terms of character journeys the rest of the cast get virtually nothing to do beyond taking part in the action-packed battles—which feels especially bad for Allura, as no time is really given to show how she’s processing Lotor’s return to villainy, or the discovery of a hidden colony of Altean survivors last season. The Paladins are pretty much the same going into season 7 as they are coming out of it, they just happen to be back on Earth. Given that this is the penultimate season you could argue that’s relatively fine—these characters have grown and developed considerably over the span of the show’s lifetime—but it feels particularly odd, given the subject matter of the season, that there’s very little in the way of personal stories beyond the immediate threat of Earth’s occupation.

Shiro is perhaps the only protagonist who gets some extra character attention outside of anything connected to Earth’s invasion. But it’s handled poorly, a disappointment amplified by the fact that producers had teased at Comic-Con that the season would introduce his significant other, Adam, confirming a long-demanded desire from fans to see some LGBTQ representation on the show (more on that here). Adam’s appearance in the series is restricted to the flashbacks in the first episode—which show him threatening to leave Shiro if his partner chooses to defy medical orders and go on another space-bound mission—and his death multiple episodes later, as part of the Galra’s initial invasion of Earth. 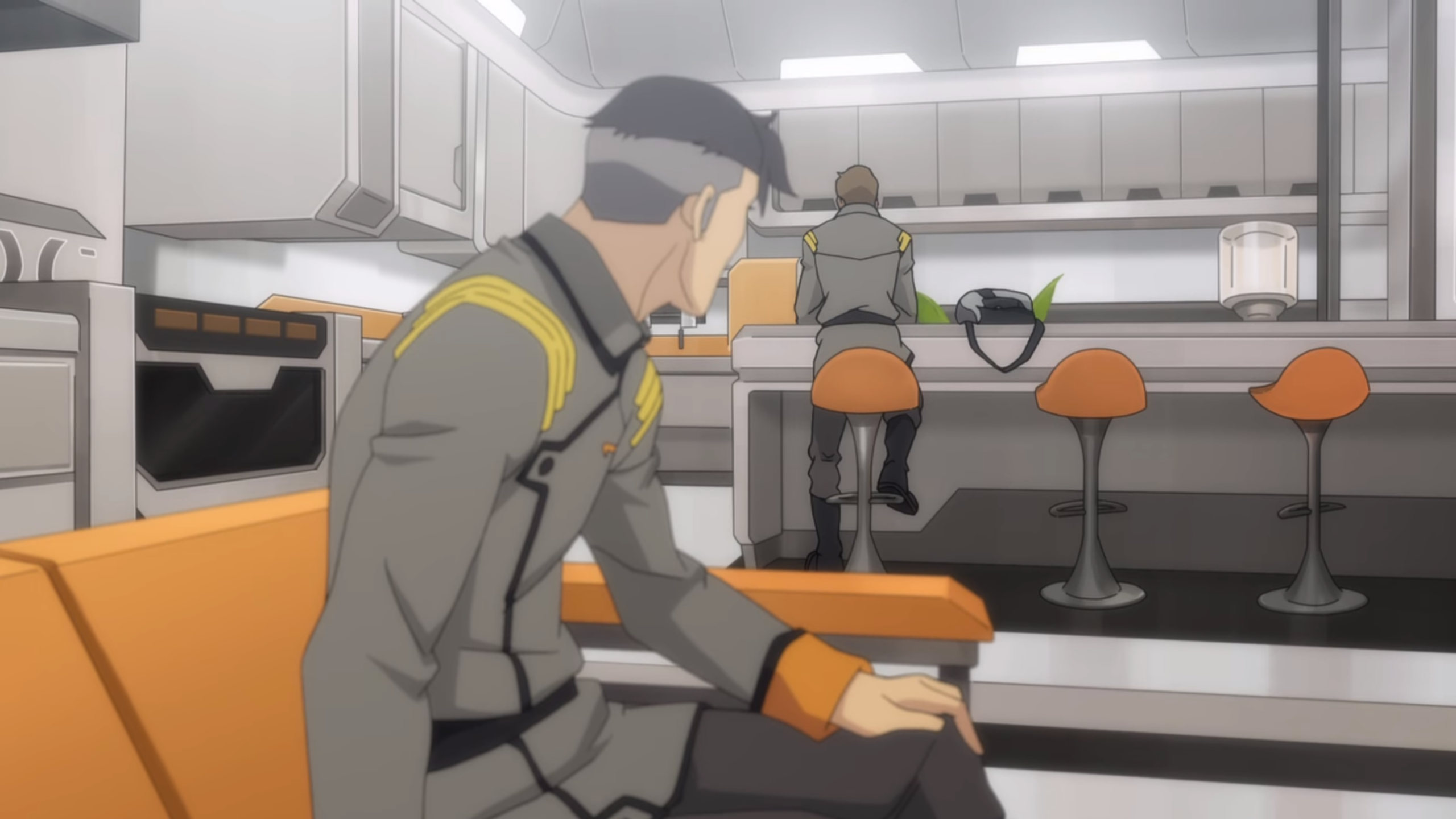 This is one of just a handful of shots where Shiro and his partner Adam are even in a frame together, let alone appearing with any level of intimacy. (Image: Netflix)

Not only is the storyline itself incredibly slight, what little time is spent with the story of Shiro’s past barely even acknowledges that Adam was a romantic partner of Shiro’s, instead of a friend or colleague. Although the fact their relationship is on the rocks in the context of the flashbacks, it’s never really explicitly acknowledged that Adam and Shiro are a couple at any point. There’s no particular intimacy between the two, or even a spoken acknowledgement that they’re a couple—Shiro gets visibly upset at seeing Adam’s name on a memorial wall, but even then, it’s demure enough that without context, it could be seen as grief for a friend rather than a husband or boyfriend. It’s instead left to the insinuation of the audience and the context of the news revealed at Comic-Con, rather than the show itself, which is not exactly the major step for representation producers had made it out to be.

Shiro’s arc is representative of the wider problem with Voltron’s seventh season. So much time is given over to the grand action—which, like I said, is the best it’s ever been for the show—that in the process it loses the individual journeys of the Paladins, a loss that in turn dampens the stakes of all the action in the first place. Voltron has never been more epic than this season, but it comes at the cost of not giving its heroes the exploration they deserve—which is especially disappointing, given just how well the previous season balanced personal arcs with the wider story of dealing with Prince Lotor. 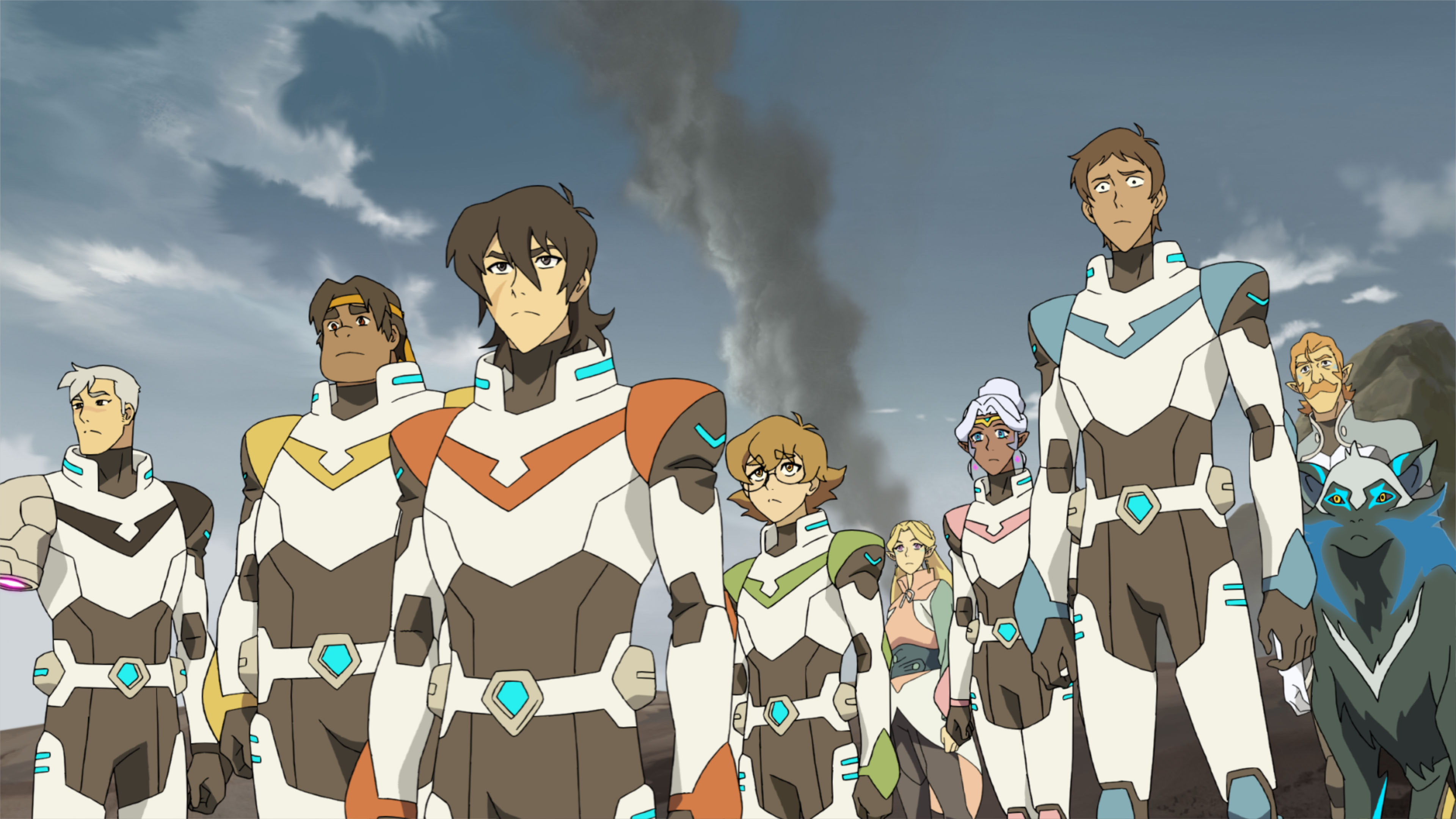 The Voltron Force looks out on the ruins of their home. (Photo: Netflix)

But with the non-stop action of Earth’s occupation and liberation out of the way, maybe the show’s final season will have time to take the foot off the gas and slow down, spending more time on the emotional arcs of its heroes. Although the season ends with an extra layer of mystery left to explore—a villainous, wildly powerful mecha piloted by an Altean that Voltron barely manages to defeat after routing Sendak—in Legendary Defender’s last huzzah, there’s also a feeling that the biggest existential conflicts of the show are behind it.

The Paladins are finally home, the Galra threat is (mostly) abated—and now all that’s really left is to say goodbye to the characters as they enter the last chapter of their journey.