You might think of black holes as enormous vacuum cleaners, sucking in all the matter and light that ventures too close. But confusingly, scientists normally see stuff leaving the area around a black hole, via jets of matter and light from ripped-apart dust. It’s rare to see matter get devoured.

Now, a team of physicists reports seeing the signature of an Earth-size clump of matter flying into a black hole at nearly a third the speed of light. It’s a lucky observation.

“To see these strings of matter falling into the black hole, you have to be looking just down the right line of sight,” Ken Pounds, physics professor emeritus at the University of Leicester, told Gizmodo. “It’s a fairly rare occasion.”

Some scientists visualise smaller black holes as being like the black hole from the movie Interstellar—a massive, spinning, compact object surrounded by a disk of shredded gas and dust, looking much like an evil planet Saturn. Objects don’t fall directly into the black hole, but travel inward along these spinning clouds. But theoretical physicists predict that larger black holes might instead have “chaotic accretion,” meaning stuff can fall into them at any angle. 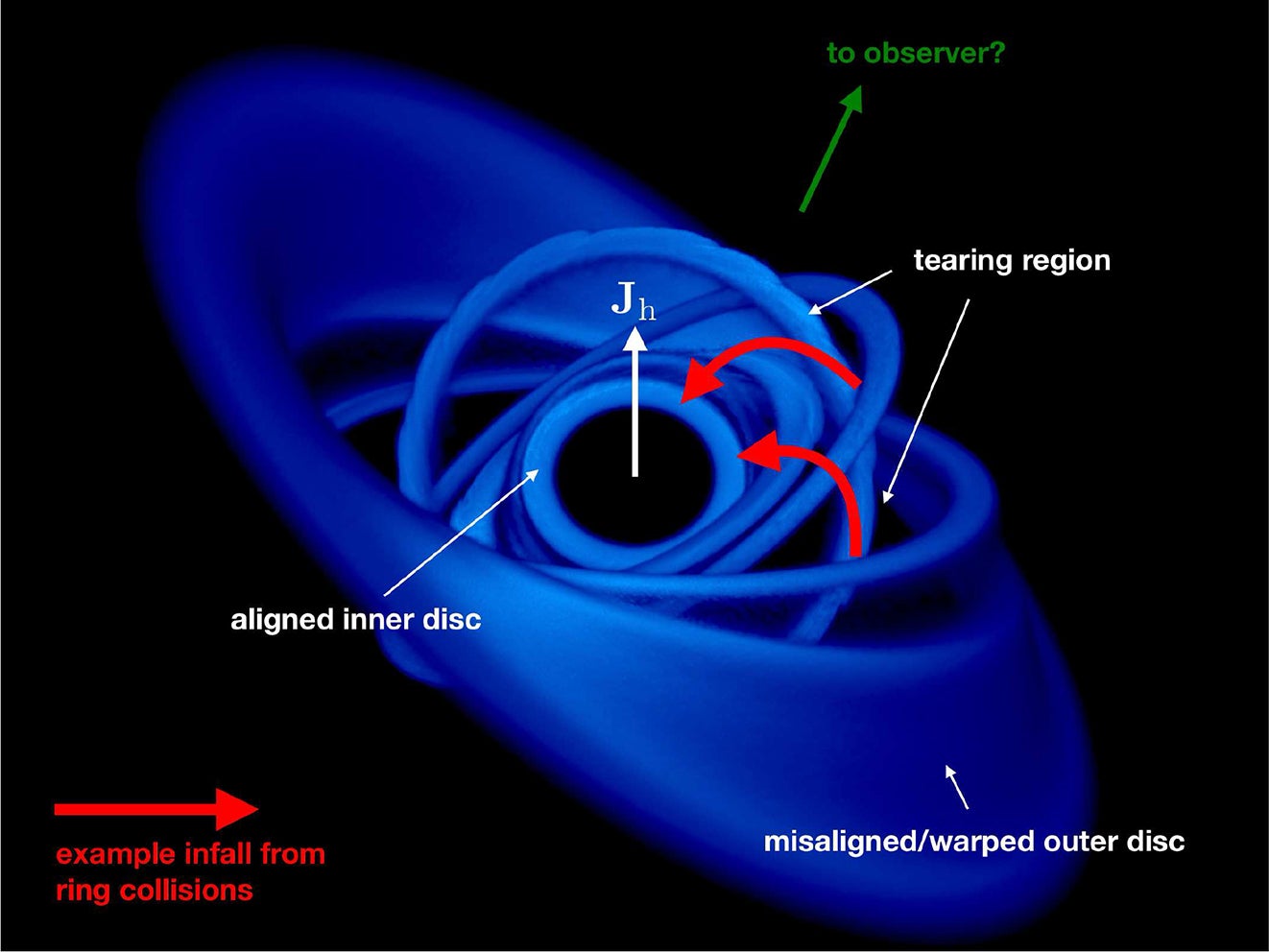 Chaotic accretion. Black hole spin axis is along Jh but tilted out of the screen, toward you. (Illustration: Pound et al/MNRAS 2018)

Pound and his team looked at an object called the Seyfert galaxy PG1211+143 with the XMM-Newton space telescope. It’s an active galactic nucleus, mean it has a very bright, compact source of radiation at its centre—which astronomers accept as a central supermassive black hole beaming out high-energy matter.

Typically, scientists see matter flowing out of these regions with velocities around 10 per cent the speed of light. But Pound and his collaborators spotted the x-ray signature of iron, calcium, argon, sulphur, and silicon, forming a gas clump the size of Earth falling directly into the black hole in a column travelling at one-third the speed of light. The clump then disappeared, without evidence of rotation. They were able to determine that the clump was moving toward, rather than away from, the black hole because the light was redshifted, meaning the speed of the inward-moving stuff was stretching out the light waves and making them appear redder. This is an example of the Doppler effect.

“This may represent the first direct evidence for chaotic accretion in an [active galactic nucleus], where accretion discs are generally misaligned to the black hole spin,” according to the paper published recently in the Monthly Notices of the Royal Astronomical Society. Their model predicts a black hole with several concentric but misaligned rings of matter. The clump travelling into the black hole would have come from collisions between particles in different rings; the matter lost momentum and fell inward.

But this is just one observation, said Pound, and he hopes that followup measurements will support his group’s initial claims. A single observation can’t serve as definitive proof of the existence of chaotic accretion.

Perhaps there are also more events like this in XMM-Newton’s archives, waiting for other astronomers to come along and find them—evidence of chaos at galaxies’ centres.