Despite Everything, You Can Now Buy 3D-Printed Gun Plans Online

The DEFCAD file repository of 3D-printable gun blueprints is live. There, you can buy the plans to print parts for anything from an AR-15 to the plastic Liberator pistol. Defense Distributed, the controversial organisation that wants to enable easier access to firearms, started selling these files last week, despite a day-old court order that forbids it from posting gun blueprints online.

On 27 August, US District Judge Robert Lasnik granted 19 American states and the District of Columbia an injunction to stop a settlement between Defense Distributed and the Trump administration’s State Department. Lasnik pointed to “the untraceable and undetectable nature of these small firearms that poses a unique danger” in this particular case. The legal battle has actually been going on for quite some time, too.

The DEFCAD website went dark in 2013, after America's State Department issued a ban on publishing gun blueprints, arguing that doing so violated US federal export controls. Defense Distributed founder Cody Wilson then filed a lawsuit against the State Department, arguing that the ban violated his constitutional rights, and in June, the Trump administration’s State Department and Wilson quietly agreed to a settlement that allowed the DEFCAD website to go live once again. But the recent legal wrangling with state attorneys general delayed those plans. Wilson, evidently, doesn’t care.

“I can sell them anywhere I like in the US,” Wilson told Gizmodo, when asked about the blueprints now available on DEFCAD. The website offers 3D-printed gun blueprints for a suggested donation of $10. When asked about whether selling the plans violates the preliminary injunction issued by Judge Lasnik on Monday, Wilson pointed to the last page of the court document. That page reads, in part:

Regulation under the AECA means that the files cannot be uploaded to the internet, but they can be emailed, mailed, securely transmitted, or otherwise published within the United States.

The injunction does not mention the sale of gun blueprints. Wilson says Defense Distributed will mail the plans on a thumb drive, email the plans, or send them through a secure file transfer. In the past iteration of DEFCAD, the files were available for free, and Wilson said at a news conference that he does not expect to make money through the new model. Wilson also told Gizmodo in a Twitter direct message that he’s received “many hundreds” of orders. “I’d say it’s good $,” Wilson said.

Washington Attorney General Bob Ferguson, who oversaw the recent federal lawsuit, isn’t having any of this.

“Because of our lawsuit, it is once again illegal to post downloadable gun files to the internet. I trust the federal government will hold Cody Wilson, a self-described ‘crypto-anarchist,’ accountable to that law,” Ferguson said in a statement. “If they don’t, President Trump will be responsible for anyone who is hurt or killed as a result of these weapons.”

And so the battle over 3D-printed guns continues. It’s unclear if America's Justice Department will take action against Wilson and Defense Distributed. The debate could also spill over into the US Congress, which has been reluctant to pass new laws that would directly address this emerging technology.

Politics does seem central to Wilson’s efforts, however. Defense Distributed is not actually selling the gun plans to anyone in the United States. The website will not allow residents of 21 states—including those involved in the recent lawsuit attempting to block the Defense Distributed settlement—to buy the blueprints. At checkout, residents of those states are greeted by this message: 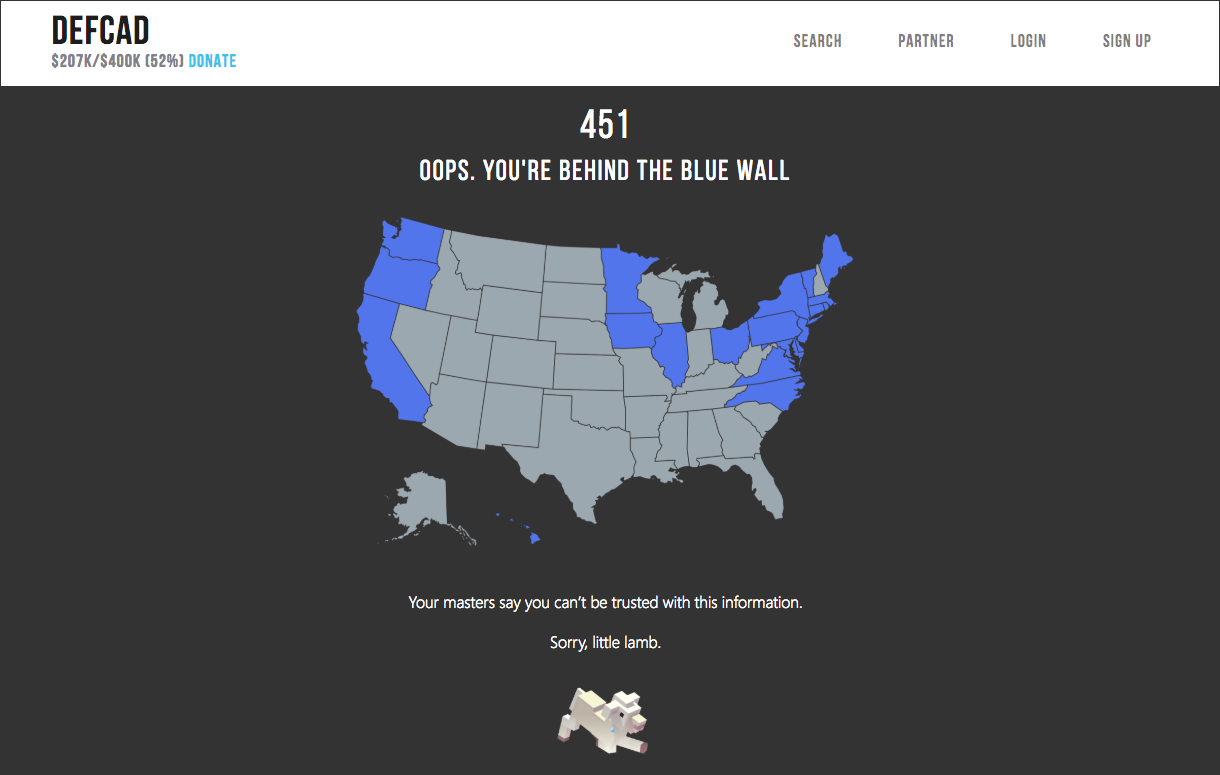 “I’m depriving blue state [liberal] parties as a way to humiliate them for living there,” Wilson explained. When asked about how selling the gun blueprints might affect the on-going case with the state attorneys general, Wilson sounded defiant. “It will clarify that the power the states want is an impermissible restraint on speech on the Internet.”

Whether the 3D-printed gun controversy is about free speech or guns rights is up for debate. It’s a lot of both, and it’s far from over.[AP News]