Since the dawn of time, human beings have been covering their naughty bits with flora—or at least that’s what the classicist motif of putting fig leaves over nudity would have you believe. This age-old practice recently saw a social media resurgence, with dozens of Facebook users posting their own semi-nude plant photos online.

Over the weekend, a Facebook group dedicated to one of the most innocuous hobbies possible—houseplants—briefly turned contentious after a user posted a photo of himself holding an orchid while shirtless. But just as quickly, the drama became an “I am Spartacus” moment for trou-dropping plant owners, with other group members posting plant pics in a state of undress in solidarity against body-shaming.

It all started with group member Jason Howell, who posted this harmless selfie of him holding a Phalaenopsis orchid he said he had purchased at Aldi to the House Plant Hobbyist group, which has well over 100,000 members: 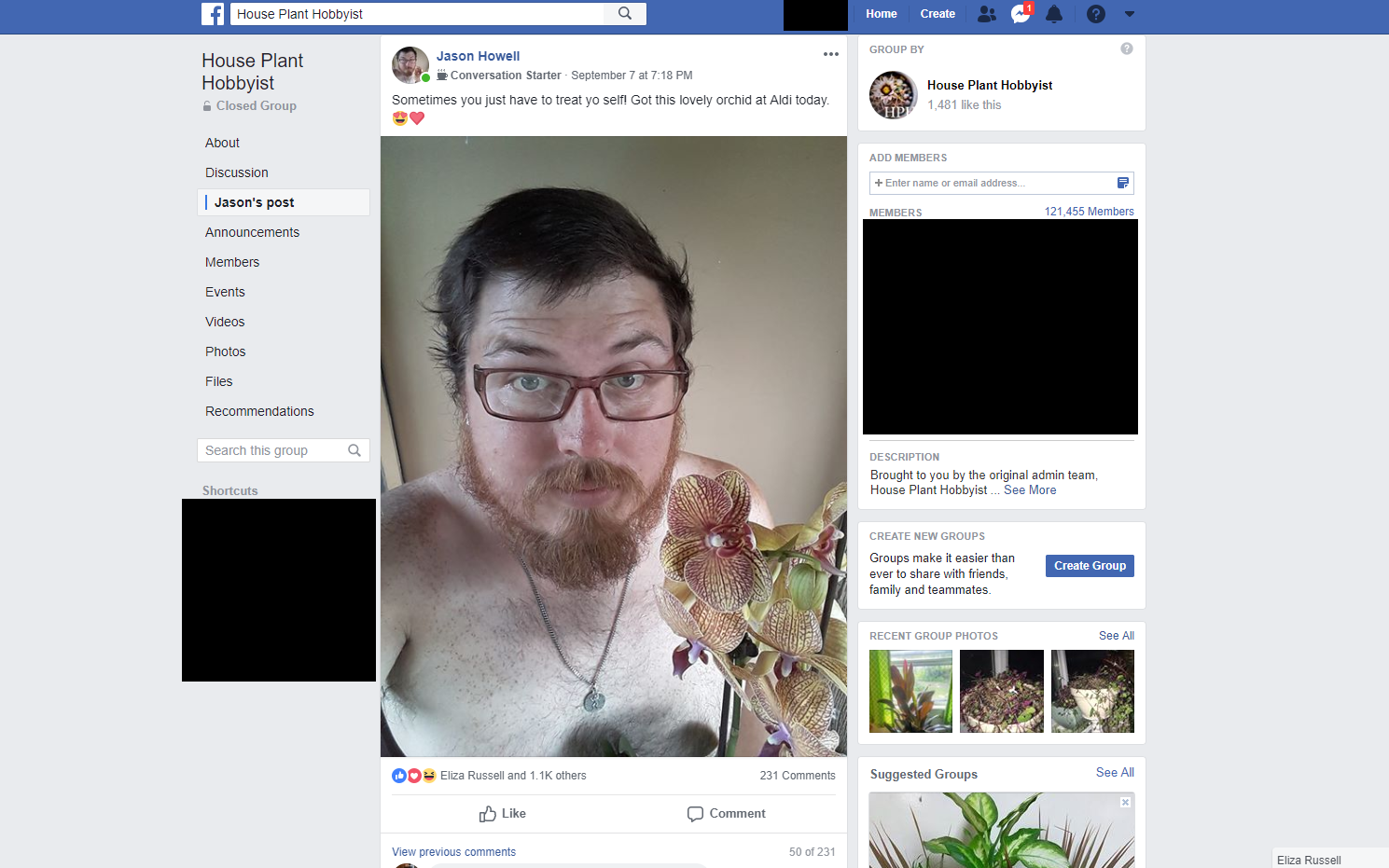 The picture did not go down well with a small minority of uptight users. Many of the negative posts they left have been deleted, but here’s a description of the ensuing chaos with plenty of “think of the children” thinking via Reddit’s r/hobbydrama board:

[P]eople were getting MAD about this picture. The OP was angry because her kids would often browse facebook with her (?????) and apparently a picture of a guy holding an orchid without his shirt off was enough to make her think the group was morally wrong. A bunch of other people were preaching with her, saying that they let their kids look at their phones or whatever and they were leaving too, because they came here for plants, not porn. This was going on and on and people kept commenting, until finally the post was deleted and the lady presumably left the group.

Well, that controversy sparked a revolution, because I have never had so many pictures of people posing naked with plants covering them up in my life.

“If I’m home all I have on are shorts,” Howell told Gizmodo via Facebook Messenger. “I had been home a couple hours before taking the picture. I was surprised anyone cared I was shirtless. It was barely my chest.”

Howell said that some users were leaving comments like “put a shirt on” and “this is inappropriate,” while one “said something to the tone that I had my shirt off because I wanted people to worship me.” Others taunted him over his broken glasses.

Again, this is over a guy posting a photo of himself holding a plant shirtless—absolutely PG-rated, and something that could be seen anywhere men are gardening. In other words, it amounted to body-shaming, a form of bullying behaviour characterised by hostile and/or reactionary criticism of others’ bodies.

Group management quickly stepped in, with group co-admin Allis Valentine telling Gizmodo, “Some people felt the need to tell others to cover up, or even made rude personal comments or attacks, which we obviously aren’t okay with.” Moderator Josh Hawkins stepped in at the behest of admins to post his own shirtless plant selfie: 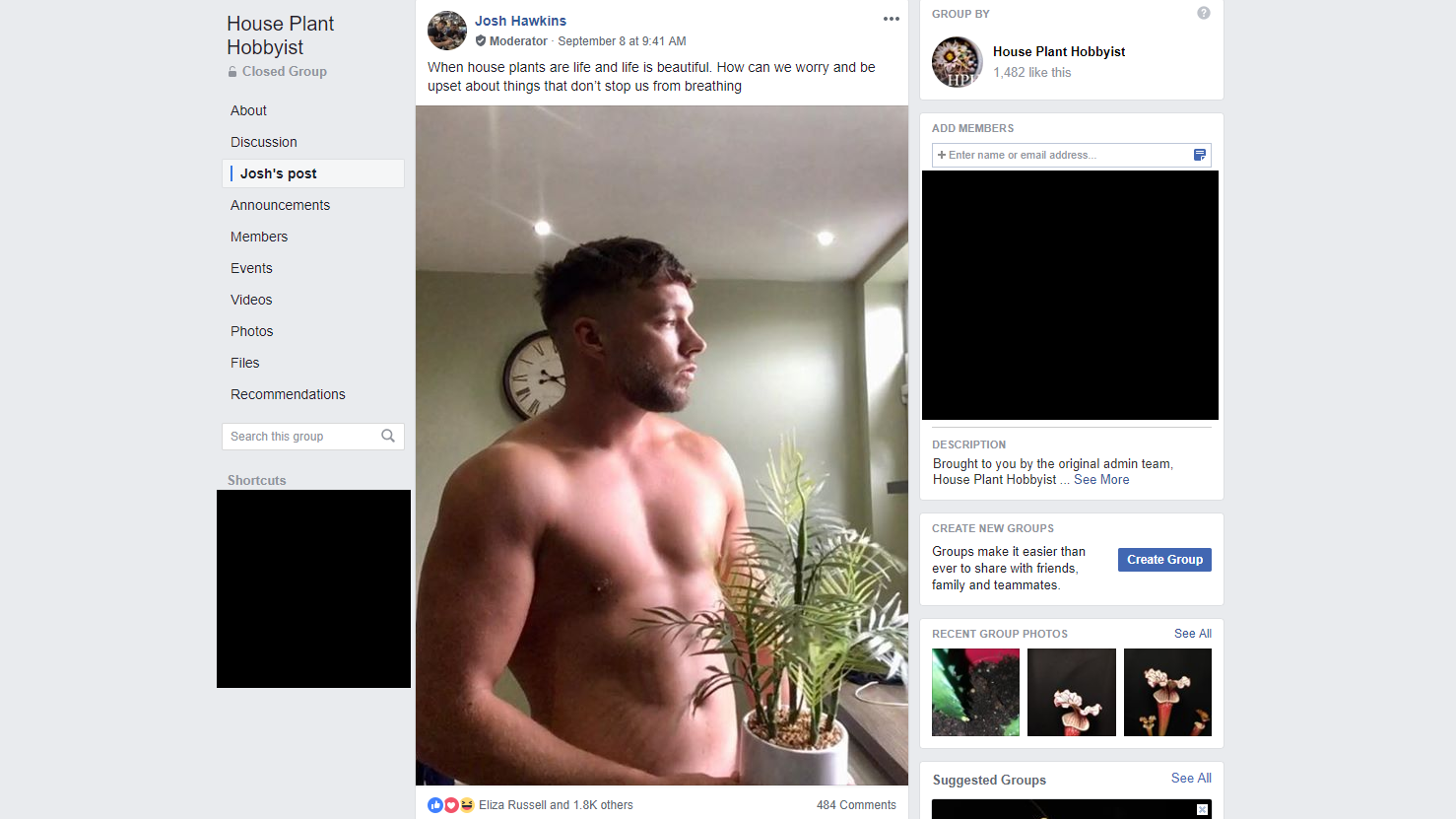 This kicked off a stampede, with dozen of users posting photos celebrating body positivity and others dismissing the group’s misguided “prudes.” (Gizmodo won’t republish these photos without permission, but trust us, there are a lot.)

Howell is “a completely sweet guy who handled the haters like a champ,” Libby Williams, the group’s other co-admin, told Gizmodo. “Most of the rude comments were people saying to put a shirt on or making some joke about him having some hair on his chest. A few said worse things. It really irked us to see him being treated so unfairly, so when we asked Josh to post his pic, others started saying he did it for attention, but once I explained that he was asked to and why, a tonne of people jumped on board to support the OP.”

Administrators added that some people did leave the group in a huff or were banned from the group for leaving nasty comments, but within hours they were greatly outnumbered by new members applying to join.

It’s not the first time drama has overtaken House Plant Hobbyist, according to Valentine, who told Gizmodo they get “get little tempests about stuff every once in a while” that “usually snowball for a few days and then everything calms back down and everyone just goes back to wanting a variegated monstera or a pink princess philodendron.”

Howell said he “woke up the next day to so many notifications and a half dead phone battery” due to the sheer quantity of people posting their own photos in solidarity.

“The admins and moderators were great and really took care of the negative comments,” he added. “Who would think in 2018 a little flesh would cause such a fuss.” [h/t Reddit]