Scientists disproved a widely accepted idea about neutron stars with a recent observation of a high-energy particle jet.

We’ve written lots about relativistic jets recently—these are particles shooting out of black holes or neutron stars at nearly light-speed. But scientists have long thought that strong magnetic fields around some neutron stars would prevent jets from forming. This new observation would smash that idea—so it’s back to the drawing board, once again.

“We disproved the old idea, and now we don’t know the new thing.” study author Jakob van den Eijnden, University of Amsterdam astronomer, told Gizmodo. “This is how science progresses and knowledge emerges.”

Scientists have observed neutron stars, dense objects that are heavier than the Sun but no larger than New York City, spinning while beaming light radiation or spewing jets of particles. But surveys during the 1970s and 1980s, as well as more recent observations, haven’t revealed jets of particles from the neutron stars with strong magnetic fields, those a hundred thousand times stronger than the intense magnetic fields produced in physics laboratories. So, based on all these observations, researchers guessed that these neutron stars simply couldn’t produce jets, and they excluded strongly magnetised neutron stars from jet formation theories.

But the newest discovery changes that. On 3 October 2017, the Swift X-ray Observatory detected a burst of x-rays and attributed it to a neutron star called Swift J0243.6+6124 spinning about every 10 seconds—that’s pretty slow for a neutron star—with a strong magnetic field. The x-rays indicated that the star had a disk of matter surrounding it, sucked up possibly from a nearby companion. They followed up with eight observations from October 2017 to January 2018 using the Very Large Array, an American radio telescope. How the radio observations dimmed over time, and how the light’s behaviour matched the x-rays, indicated to the astronomers that the neutron star was also emitting a jet. 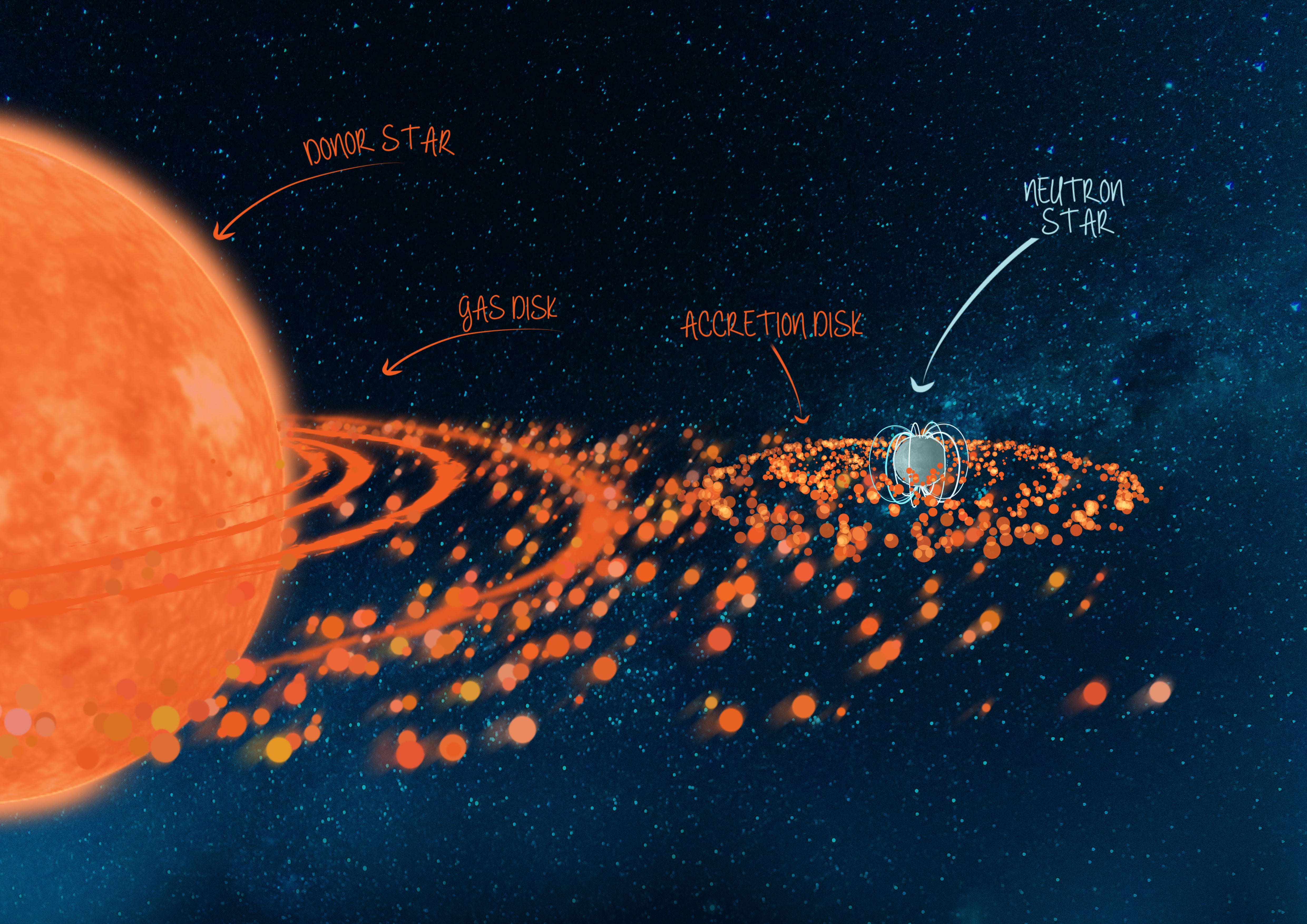 Artist’s impression of the neutron star accreting matter from another star (Illustration: ICRAR/University of Amsterdam)

This was a fortuitous observation, van den Eijnden explained. They were in the midst of observing other sources that once again didn’t offer enough information to indicate the presence of a jet when this newer source appeared. “I remember getting the first radio detection that told us we’d seen a jet and feeling really excited,” he said.

Before this discovery, theorists thought that jets formed from magnetic activity at the inner part of the disk of matter surrounding the neutron star, but that a stronger field would choke the process and stop a jet from forming. So, what’s happening here? Maybe the jet originated from further out in the disk where the magnetic field is weaker, according to the paper published in Nature.

Or maybe the spinning of the neutron star powers the jet. University of Amsterdam astronomer Nathalie Degenaar pointed out that if the rotation powered the jet, then slower-rotating neutron stars would have a weaker jet, as is the case seen here, according to a press release.

Bettina Posselt, a Penn State astronomer who studies different aspects of neutron stars and was not involved with the new study, told Gizmodo that the paper was interesting. Its conclusions have implications for theories about how these relativistic jets form, she said.

So, once again, a new discovery has clouded scientists’ understanding of these wild cosmic objects, and it’s time for some new theories.

“In science, when you try to answer any questions, you don’t get an answer—you get more questions,” said van den Eijnden. “That’s the case here.” [Nature]