North Korea pledged to shut down one of its nuclear test sites in a meeting today between South Korean President Moon Jae-in and North Korean dictator Kim Jong Un in Pyongyang. What does the North want in return? “Corresponding measures” from the United States. Unfortunately, we don’t know what that means yet.

“The North has agreed to permanently shut down an engine test site and missile launch pad in Dongchang-ri, in the presence of experts from the countries concerned,” South Korean president Moon Jae-in said in a statement.

“Contingent upon corresponding measures by the United States, the North will also carry out further measures such as the permanent dismantlement of the Yeongbyeon nuclear facility,” Moon continued.

As the Washington Post points out, the pledge is a step in the right direction, but experts caution that dismantling just one nuclear site in exchange for potentially major concessions from the United States might not be such a great deal. For instance, many on the American side would like to see North Korea declare all of its nuclear test facilities rather than offer up “piecemeal” dismantling that some see as just a way for North Korea to gain prestige on the world stage and drag its heels for more time without actually giving up its nuclear arsenal.

“The world needs to remember that North Korea has other nuclear and missile facilities, and that these concession will not necessarily limit or end their nuclear or missile programmes,” Melissa Hanham, a researcher at the Middlebury Institute of International Studies at Monterey, told the Washington Post.

Behind the scenes, North Korea is also demanding a formal declaration of an end to the 1950s Korean War, something that President Trump allegedly agreed to in private during his meeting with Kim in Singapore this past June. But American president Donald Trump has a less nuanced take on the whole situation without mention of any concessions.

“Kim Jong Un has agreed to allow nuclear inspections, subject to final negotiations, and to permanently dismantle a test site and launch pad in the presence of international experts. In the meantime there will be no Rocket or Nuclear testing,” Trump tweeted shortly after midnight.

US intelligence services allege that North Korea is still enriching uranium and hawks on North Korea are disappointed about the latest meeting. Republican Senator Lindsey Graham from the state of South Carolina took to Twitter to voice his concerns.

“While North Korea has stopped testing missiles and nuclear devices, they have NOT moved toward denuclearisation,” Graham continued. “South Korea should not be played by Kim Jong Un.” 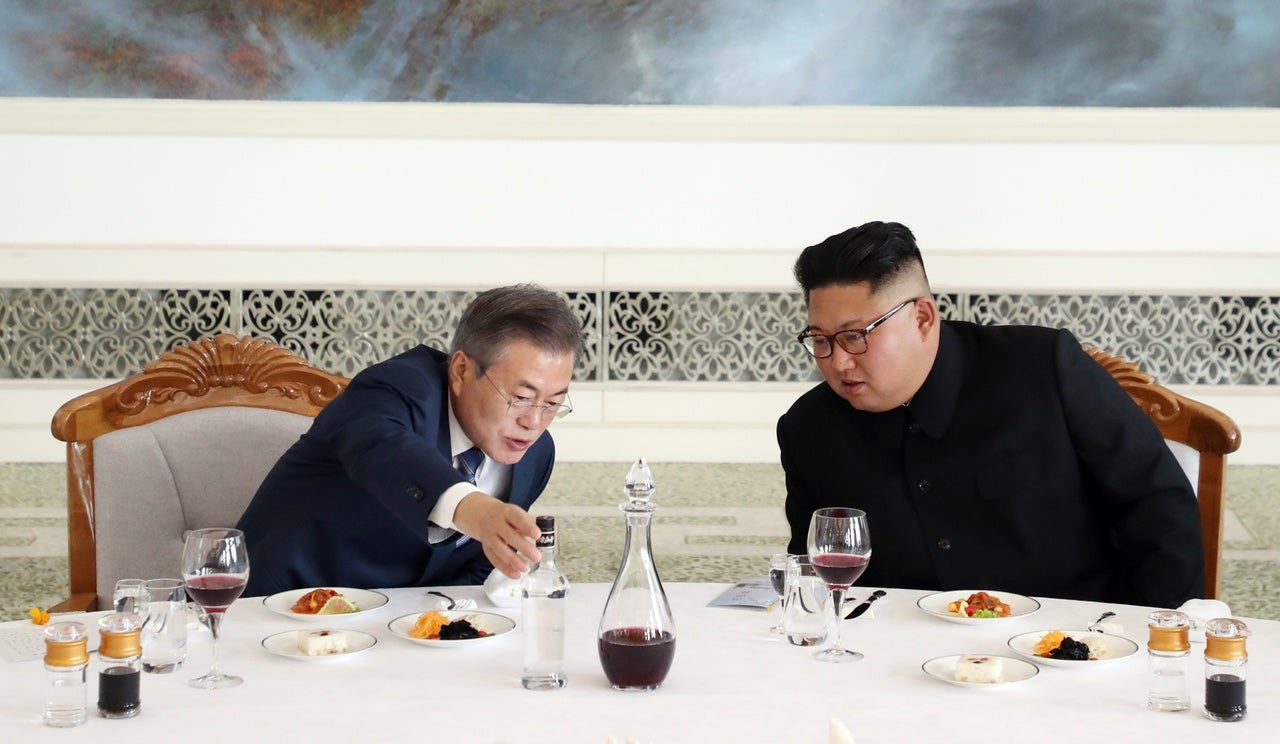 Kim Jong Un said he wanted to visit South Korea soon, which would be a first for any North Korean leader, and the North and South have said that they’re going to make a joint bid for the summer 2032 Olympic Games. But some Americans are getting nervous that South Korea is stepping out and forming a foreign policy that leaves the United States out of any deal.

Nuclear weapons remain one of the gravest threats to world peace. And it doesn’t help anyone sleep at night when Kim Jong Un and Donald Trump have their fingers on the nuclear button. Bob Woodward’s latest book Fear: Trump in the White House, confirmed some of our greatest fears, including the possibility that we’re just one unhinged tweet away from all out war:

Within the White House but not publicly, Trump proposed sending a tweet declaring that he was ordering all US military dependents—thousands of family members of 28,500 troops—out of South Korea.

The act of removing the dependents would almost certainly be read in North Korea as a signal that the United States was seriously preparing for war.

But Woodward’s book doesn’t make Lindsey Graham look any more level headed than Trump. Graham reportedly encouraged the president to assassinate Kim at one point. And in a terrifying scene, Woodward explains Graham’s strategy towards North Korea with precisely what the senator is willing to give up: Namely, the people in South Korea who would be targeted by North Korea’s weapons if a war did break out.

Contrary to common wisdom, there are no adults in the room. [Blue House and Washington Post]