Playing A Game of Thrones: The Board Game was one of the most intense experiences of my life—it remains the only board game I’ve ever stormed away from out of anger. Sorry, family. But if I thought that was an extreme Game of Thrones experience, I too know nothing, Jon Snow. Because there’s a new Song of Ice and Fire fan-created game that’s so massive, you need 33 players (and four referees) to make it happen. The best part? It’s totally free.

Defy Danger has released its latest tabletop game called Aegon’s Conquest, which takes place during the time when Aegon Targaryen sought to conquer the Seven Kingdoms of Westeros in George R.R. Martin’s A Song of Ice and Fire series, 300 years before the events of Game of Thrones. Defy Danger founder Casey Ross and his team started working on it back in 2015, and did several playtest events before making it available to the public. Ross emphasised that this is a fan work, not an official A Song of Ice and Fire game—that’s why they’re giving it away for free on DriveThruRPG instead of selling it.

In the game, players are split into eight teams of four, representing the eight Houses of Westeros that existed at the time: Targaryen, Arryn, Stark, Hoare, Lannister, Gardener, Martell, and Durrandon. Each member of that House will take on the role of Lord, Heir, Knight, or Maester, and each part has its own strengths and weaknesses. However, Ross said it’s up to each person to make the role their own.

The goal of the several-hour experience is to claim the Iron Throne by having the most power (meaning points) at the end of the game, which is achieved by conquering lands and uncovering relics. But be careful that your secrets aren’t spilled, that’s how you lose points. There are rounds where certain actions happen, but Ross said he was surprised to find how much of the game actually happened between rounds. That’s where you get some of the best backroom deals—meaning alliances, betrayals, or possibly both.

“Each team has their own distinct mechanical advantages and disadvantages. But consistently, the team that has really gotten ahead and stayed ahead are the ones that are able to go over to other teams between rounds and make secret handshakes and share secrets behind other people’s backs,” Ross said. “This isn’t just moving pieces on a board. This is interacting with other human beings, with your words alone being able to influence them.” 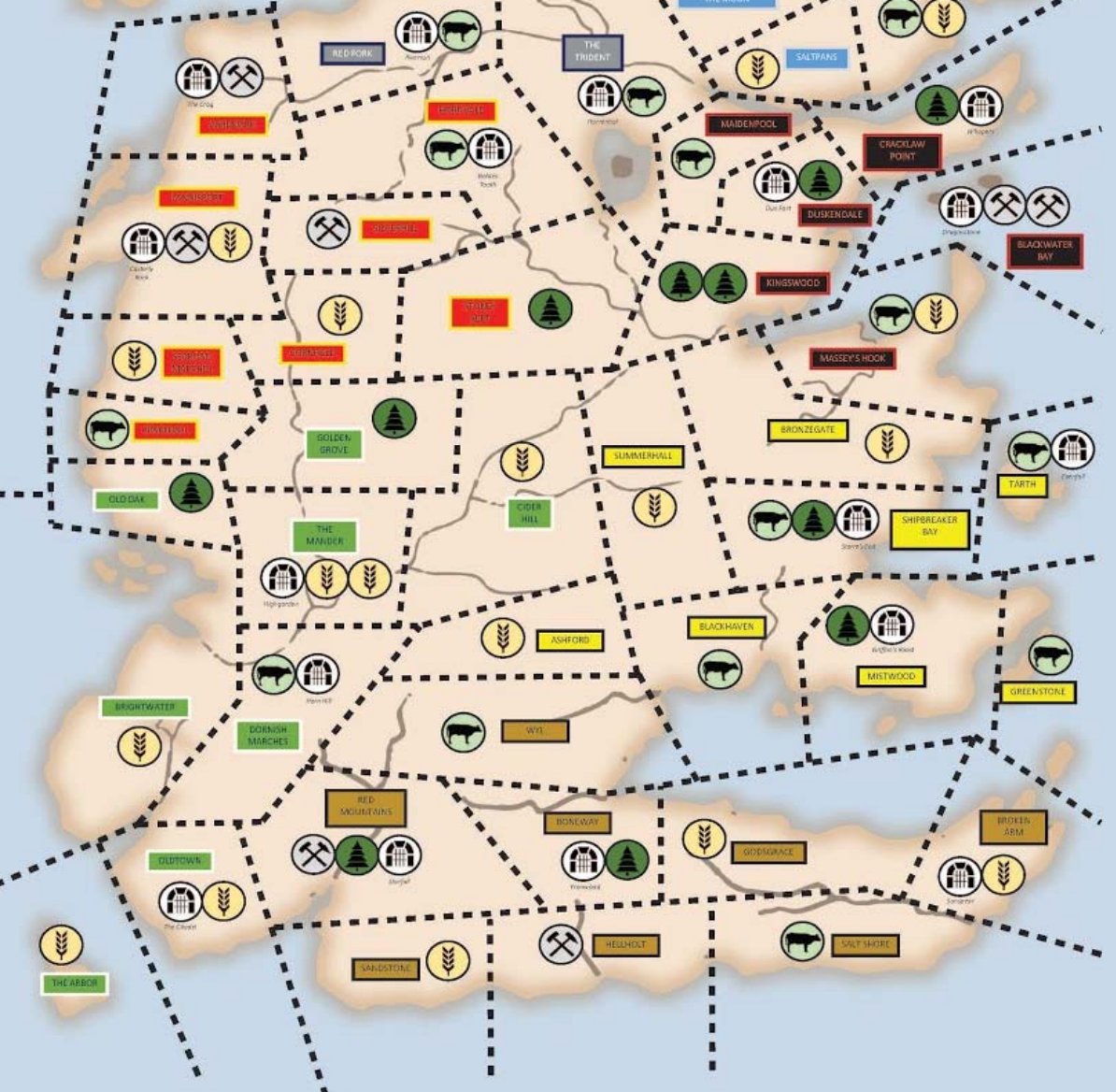 A portion of the gaming map, which takes place in Westeros. (Image: Defy Danger)

But what about that 33rd person? Well, they take on the role of the Lord Commander of the Night’s Watch. We asked Ross what that person gets to do, since you’d think they would just stand around, act cold, and yell about why no one cares about White Walkers anymore. However, Ross said the Lord Commander’s goal is to conscript new members into the Night’s Watch, luring them away from their Houses through coercion, bribery, or other means. For example, if House Targaryen is catching some heat (and losing points) because everyone learned about their incest habits, one of the members could join the Night’s Watch to wipe the slate clean.

Not only is that an awesome addition (and a part that I would totally want to play), it even turned out one of the coolest moments in any of the playtests, according to Ross. He said that while the game isn’t designed as a LARP, meaning no one is required to role play, that hasn’t stopped people from getting really into it. In ways that have astonished even him.

“[During the game], someone comes in and starts talking about how they want to join the Night’s Watch. They all got up on the stage—there were several of them—and all of them did the oath of the Night’s Watch together, and everyone starts cheering and clapping,” Ross said.

Ross said there are plans to host more Aegon’s Conquest game nights in Maryland, where he’s based—but since the megagame is free, others could conceivably host play nights of their own. Right now, Defy Danger is working on its next game called Dungeons & Dragons Team Deathmap, which will be a team-based player-versus-player competition. They’re planning on doing a Kickstarter sometime in November, with hopes to release it early 2019.