A German-French probe called MASCOT was sent to the surface of Ryugu, an asteroid located 190 million miles from Earth, to collect valuable data. But it needed to work fast—the shoebox-sized probe had only 16 hours to live.

The 22-pound (10 kg) probe was designed and built by the German Aerospace Centre, or Deutsches Zentrum für Luft-und Raumfahrt (DLR), in close cooperation with the French space agency CNES (Centre National d’Etudes Spatiales) and several other institutions. Measuring 11.6 inches (29.5 centimetres) at its widest, the box-shaped probe is powered by a non-rechargeable battery that wasn't expected to last for more than 960 minutes.

At 2:58 a.m. BST on Wednesday, Japan’s Hayabusa2 probe released the Mobile Asteroid Surface Scout, or MASCOT, which gently landed on the asteroid’s surface a few minutes later, according to DLR. During its 167-foot (51-metre) free fall, MASCOT descended no quicker than a walking pace. MASCOT now joins Japan’s two MINERVA-II rovers, which landed on Ryugu 10 days ago.

Hello #Earth, hello @haya2kun! I promised to send you some pictures of #Ryugu so here’s a shot I took during my descent. Can you spot my shadow? #AsteroidLanding pic.twitter.com/dmcilFl5ms

“It could not have gone better,” said MASCOT project manager Tra-Mi Ho in a statement. “From the lander’s telemetry, we were able to see that it separated from the mothercraft, and made contact with the asteroid surface approximately 20 minutes later.”

During its free fall, the probe managed to capture 20 photographs of Ryugu, which were subsequently uploaded to the Hayabusa2 spacecraft for safekeeping. 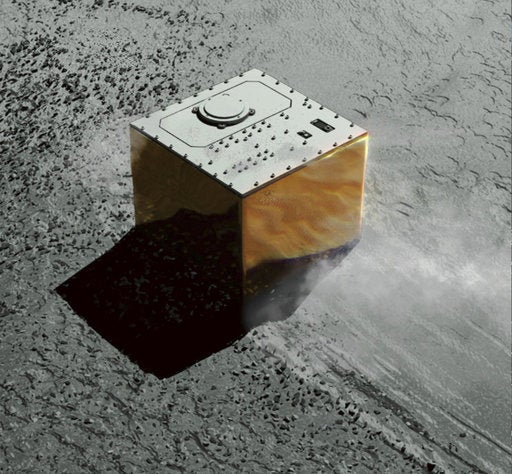 The tiny probe has likely already expired, but before doing so, it will have performed various measurements on Ryugu’s surface and transmitted valuable data to Hayabusa2. To do so, MASCOT used four instruments: a camera (MASCAM), a radiometer to measure electromagnetic radiation (MARA), an infrared microscope (MicrOmega), and a magnetometer to measure magnetic forces (MASMAG). The probe captured images at multiple wavelengths, analysed surface material, and recorded surface temperature, among other tasks.

After performing its first set of planned measurements, the probe was expected to hop to a second location and, fingers crossed, do it all over again before expiring; there was only enough time for one hop. JAXA’s MINERVA-II1 and MINERVA-II2 probes will be able to make multiple leaps, hopping from location to location. Data collected by MASCOT will help scientists study the Solar System’s “most primordial material directly on an asteroid,” as DLR planetary researcher Ralf Jaumann put it.

The next big milestone for the Hayabusa2 mission should come later this month. The spacecraft, after forming a crater on the asteroid’s surface with an explosive “impactor,” will descend to the crater and collect samples. Hayabusa2 and its precious cargo will then head back to Earth to complete this historic mission. [German Aerospace Centre, BBC, AFP]