Amazon, America’s second-largest employer, has so far remained immune to any attempts by US workers to form a union. With rumblings of employee organisation at Whole Foods—which Amazon bought for $13.7 billion (£10.5 billion) last year—a 45-minute union-busting training video produced by the company was sent to Team Leaders of the grocery chain last week, according to sources with knowledge of the store’s activities. Recordings of those videos, obtained by Gizmodo, provide valuable insight into the company’s thinking and tactics.

Each of the video’s six sections, which the narrator states are “specifically designed to give you the tools that you need for success when it comes to labour organising,” takes place in an animated simulacrum of a Fulfillment Center. The video’s narrators are clad in the reflective vests typical of the real-world setting. “We are not anti-union, but we are not neutral either,” the video states, drawing a distinction that would likely be largely academic to potential organisers. To expound on what non-neutrality might look like, the video adds in plain language (emphasis ours):

“We do not believe unions are in the best interest of our customers, our shareholders, or most importantly, our associates. Our business model is built upon speed, innovation, and customer obsession—things that are generally not associated with union. When we lose sight of those critical focus areas we jeopardise everyone’s job security: yours, mine, and the associates’.”

Amazon’s anti-union training video comes to light amid an image crisis for the company. Years of reporting on low pay and poor working conditions reached a fever pitch late this summer when US Senator Bernie Sanders proposed legislation directly challenging the company’s reliance on social subsidy programmes. Likewise, Amazon lost more than it gained in a charm offensive ploy that rewarded its warehouse ambassadors for tweeting nice things about the company—like how they are free to use facility toilets and are not slaves.

Gizmodo has opted to not publish the video itself in order to maintain source anonymity.

Throughout, the video claims Amazon prefers a “direct management” structure where employees can bring grievances to their bosses individually, rather than union representation. However, a number of warehouse workers have expressed to Gizmodo in past reporting that they believed voicing their concerns led to retaliatory scrutiny or firing. “[Amazon] preaches that they have this open-door policy and then when you try to go through that open door, instead of being allowed in, you are now set up,” a former Fulfillment Center worker in Indiana told Gizmodo. “You’re somebody that talks and you’re somebody they’re gonna absolutely make the job as difficult as humanly possible for.” Another Floridian Fulfillment Center worker told Gizmodo he sent complaints of low pay to Amazon CEO Jeff Bezos’s public-facing email address (jeff@amazon.com) and claims management was “harassing me since I sent that email.” He said he was terminated shortly afterwards. 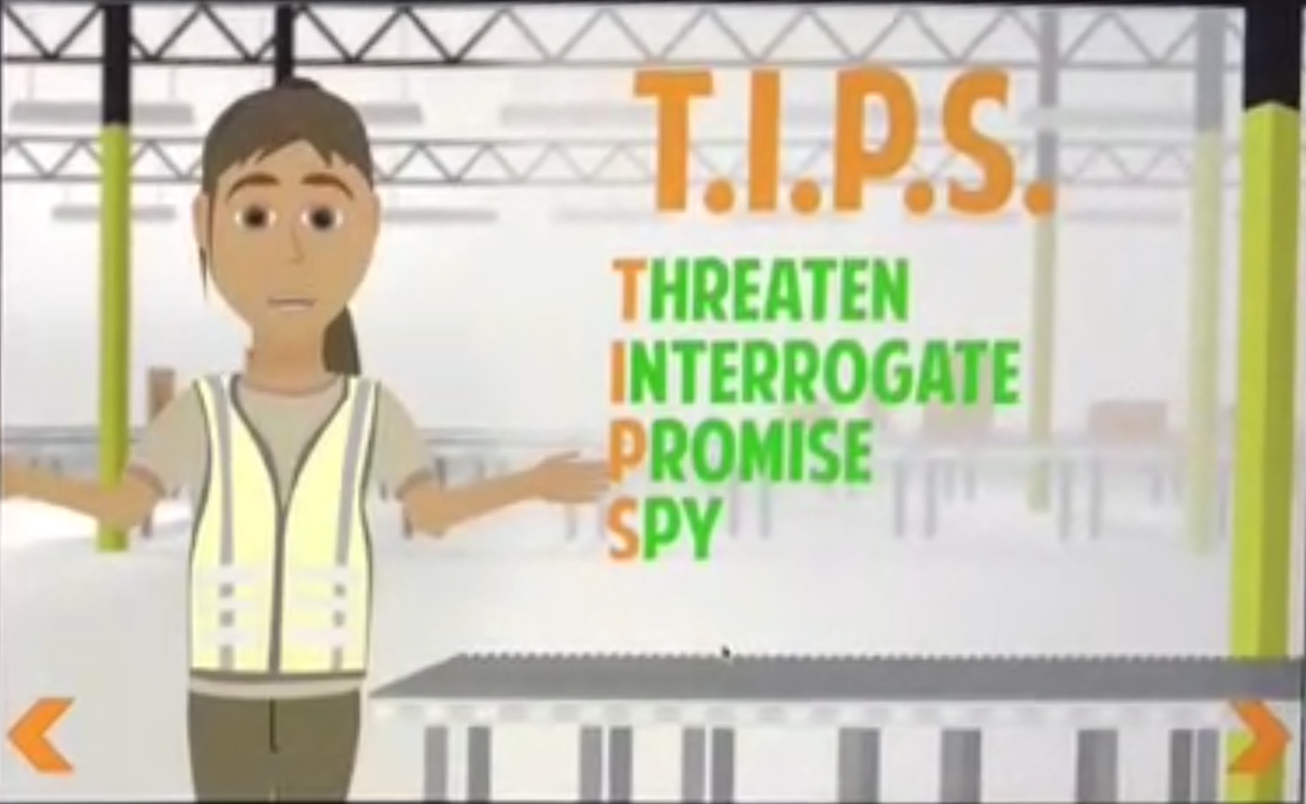 T.I.P.S. are the tactics Amazon advises management not to use, according to the video. (Screenshot: Amazon training video/Amazon)

The video provides some background on America's National Labor Relations Act—the 1935 law that guaranteed workers in the country the right to organise, take collective action, and strike—and the various protect activities employees can engage in. But the meat of the video begins in section four, entitled “Warning Signs.”

Here are a few of the (extensive) examples “that can indicate associate disengagement, vulnerability to organising, or early organising activity,” according to the video:

The training video then asks managers to listen to 10 hypothetical employees and select whether their remarks constitute a “warning sign” or “innocent interaction.” Workers loitering in the break room after their shift, asking for a list of the site’s roster, or complaining about the absence of a living wage fall into the “warning sign” category. 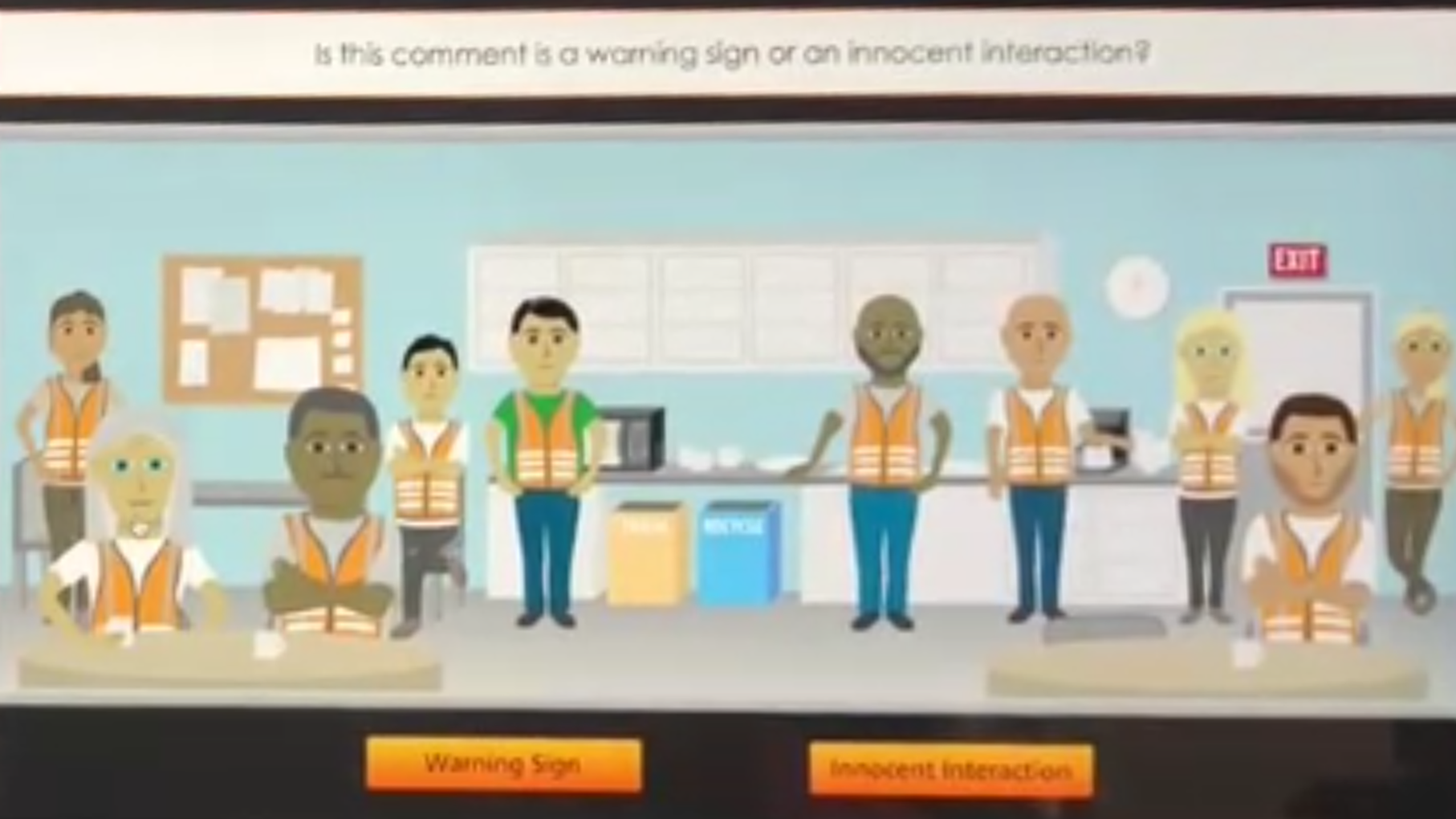 In following sections, Amazon teaches managers that, where talking to subordinates about unions is concerned, “almost anything you say is lawful,” even providing some examples of what statements are completely kosher even if they’re clearly meant to inspire fear of organisation (emphasis ours):

“You would never threaten to close your building just because associates joined a union. But you might need to talk about how having a union could hurt innovation which could hurt customer obsession which could ultimately threaten the building’s continued existence.”

While warning managers that activities like threatening employees cross a line, giving personal opinions that accomplish nearly the same are within their rights. “Opinions can be mild, like, ‘I’d rather work with associates directly,’ or strong: ‘Unions are lying, cheating rats.’ The law protects both!”

Throughout, managers are encouraged to express opinions against unions to their workers, and any of signs of potential organization are supposed to be escalated to human resources and general managers immediately.

Sadly, these kinds of tactics are not unique to Amazon. US retail giants Target, Lowe’s, and Walmart have all faced criticism in recent years for producing training videos intended to quash employee organising.

“The truth is that [Whole Foods Market] is afraid of organised labour and these trainings speak to that fear,” a current Whole Foods organiser told Gizmodo. “I think the parts in particular where it teaches team leaders how to subtly manipulate conversations with their team members is just really gross. It is representative of the worst parts of WFM culture.”

After Amazon declined multiple requests to comment for this story, the company issued the following statement. Amazon asserts that we “cherry-picked soundbites” from the video and that our characterisation does not convey Amazon’s “view on how to create career opportunities for employees.” We’ve published the statement in full below and requested that Amazon share the video with us so that readers can watch it for themselves.

“We’re perplexed as to why Gizmodo takes issue with a company wanting to better engage its employees, train hundreds of managers to maintain an open and direct dialogue with associates, and create channels to drive innovation on behalf of the customer in a caring and inclusive environment. The reporter clearly cherry-picked soundbites from the video to meet his editorial objective and do not align with our view on how to create career opportunities for employees.

“In the U.S., the average hourly wage for a full-time associate in our fulfillment centers, including cash, stock, and incentive bonuses, is over $15/hour before overtime. That’s in addition to our full benefits package that includes health, vision and dental insurance, retirement, generous parental leave, and skills training for in-demand jobs through our Career Choice program, which has over 16,000 participants. We encourage anyone to come see for themselves by taking a tour at one of our fulfillment centers — learn more at http://amazonfctours.com.”

By any indication, Amazon is seriously concerned about any arm of their business becoming unionised. Maybe it’s time for workers to consider why their bosses are so worried.