Astronomers have discovered an object, dubbed “the Goblin,” in the outer reaches of the Solar System. The dwarf planet never gets any closer to the Sun than 6 billion miles, but experts say its orbital configuration points to the existence of a much larger, more distant planet —the elusive Planet Nine.

The Goblin, or 2015 TG38 as it’s more formally called, is what’s known as an extreme trans-Neptunian object, or ETNO. As the moniker implies, these objects, of which there are potentially thousands, are located well beyond the orbit of Neptune. What’s remarkable is not that the Goblin exists, but that astronomers were actually able to detect it.

The researchers who discovered the object, a team led by Scott Sheppard from the Carnegie Institution for Science and Chadwick Trujillo from Northern Arizona University, estimate that the Goblin is around 185 miles (300 kilometres) in diameter. At this size, it could very well be sphere-like in shape. Its mean distance from the Sun is about 80 astronomical units (AU), where 1 AU is the average distance from the Earth to the Sun. That’s 7.45 billion miles, or 12 billion kilometres. 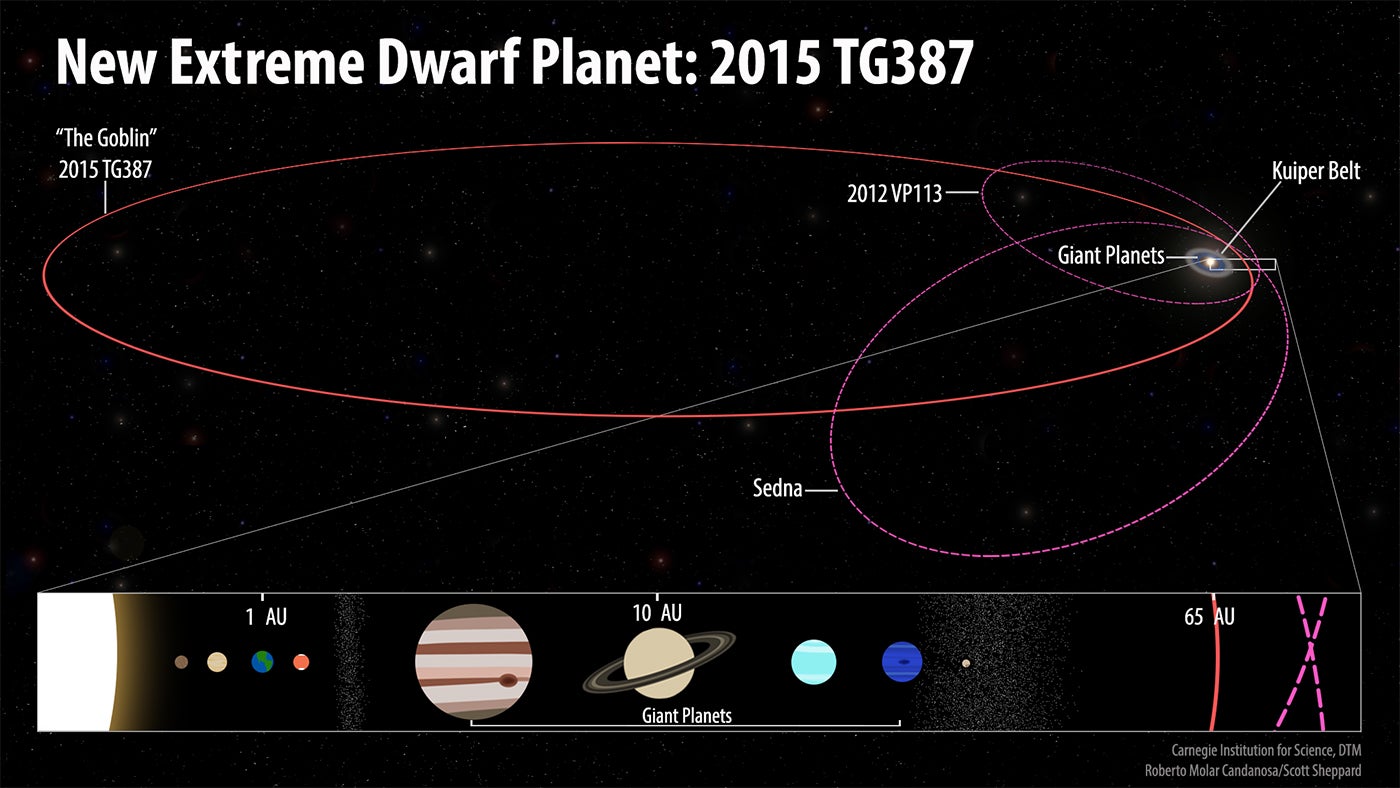 Diagram showing the orbital path of Goblin relative to other Solar System objects. The new dwarf planet joins Sedna and 2012 VP113 as the only three known Inner Oort Cloud objects.

For comparison, Pluto is about 34 AU from the Sun, so the Goblin is roughly 2.5 times farther away. So yeah, it’s out there.

But it actually gets even farther away than that—the Goblin has a super-elongated orbit. It takes about 40,000 years for this ENTO to complete a full cycle around the Sun, but it never gets any closer than about 65 AU—its perihelion point. Two other known ETNOs, 2012 VP113 (also discovered by Sheppard and Trujillo) and Sedna have even longer perihelia, at 80 AU and 76 AU respectively. Goblin now boasts the third-most distant perihelion known, but its aphelion, the point at which it’s the farthest from the Sun, is a whopping 2,300 AU. That’s 313.8 billion miles, or 503 billion kilometres.

The Goblin’s extreme orbital path means it never comes close enough to impose gravitational influence on the Solar System’s giant planets, like Neptune or Jupiter. And at the astounding distance of 2,300 AU, it gets slotted into an emerging astronomical category known as Inner Oort Cloud objects (IOCs), of which 2012 VP113 and Sedna are the only other two known members.

“We think there could be thousands of small bodies like 2015 TG387 out on the Solar System’s fringes, but their distance makes finding them very difficult,” said David Tholen, an astronomer at the University of Hawaii and a co-author of the new study, in a statement. “Currently we would only detect 2015 TG387 when it is near its closest approach to the Sun. For some 99 per cent of its 40,000-year orbit, it would be too faint to see.”

Mike Brown, an astronomer at the California Institute of Technology who wasn’t affiliated with the new study, says it’s important to understand that this isn’t the Oort Cloud, which is much further away, beginning at around 2,000 to 5,000 AU and reaching out as far as 50,000 AU.

“They’re calling it part of the ‘inner Oort cloud’ though I feel like that is probably not the right term,” Brown told Gizmodo. “We really haven’t yet come up with the correct way to describe these very distant objects. But the key is that it is very distant, and that it never gets very close to Neptune. Basically there are only two other objects like it now, so adding even one more greatly increases our understanding of this population.” 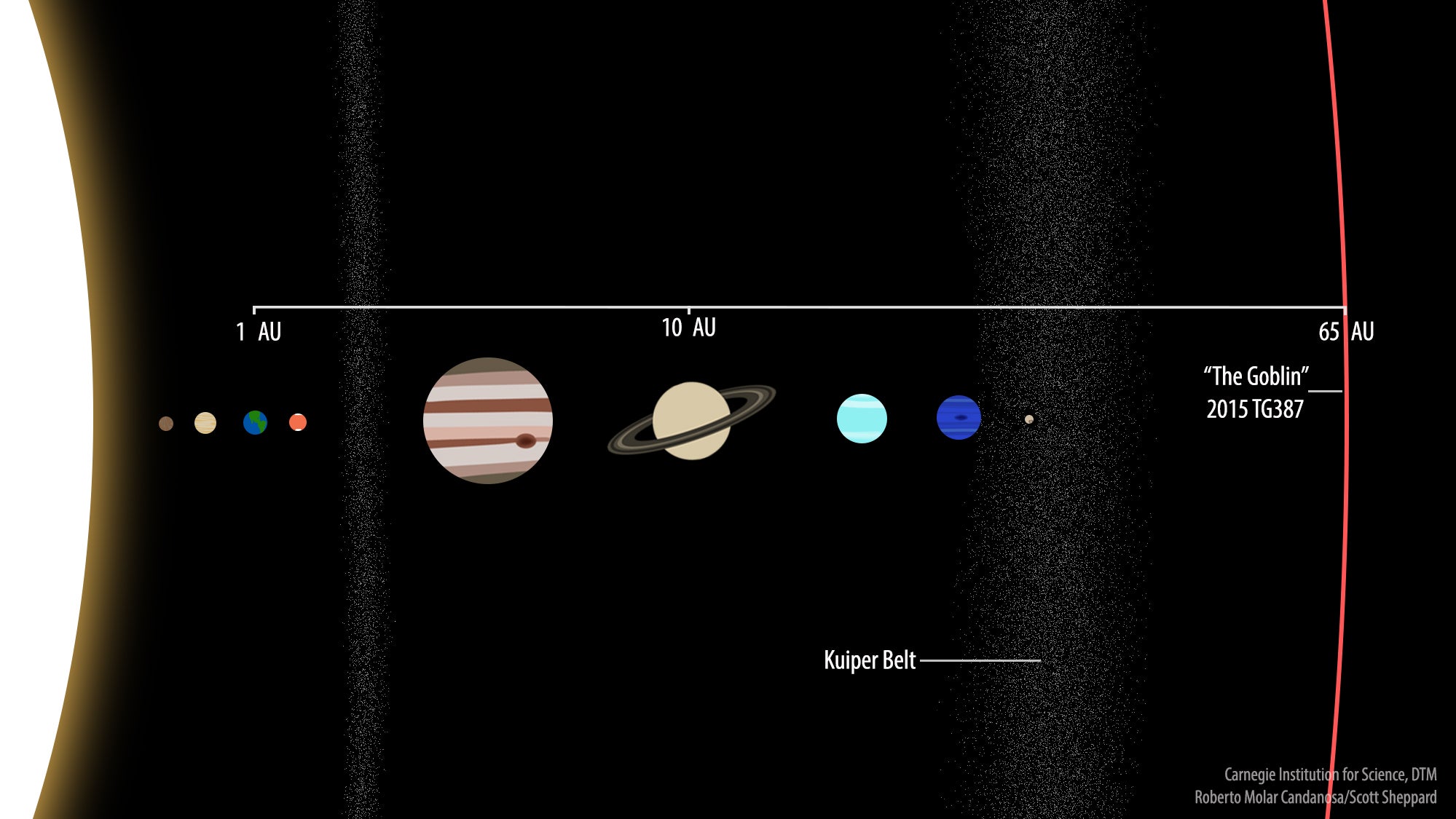 The first glimpse of the Goblin was made in October 2015 at the Japanese Subaru 8-metre telescope located atop Mauna Kea in Hawaii, but it took years of observations to confirm its true identity. The researchers needed to acquire accurate measurements of its orbit—not an easy task, given how slowly it’s moving and its protracted orbital period. Measurements made from 2015 to 2018 by the Magellan telescope at Carnegie’s Las Campanas Observatory in Chile helped to both determine and confirm Goblin’s orbital configuration.

The discovery of 2015 TG38 is bolstering the case for Planet Nine—a hypothetical planet, sometimes referred to as Planet X, that’s allegedly several times larger than Earth and located hundreds of AU away. As noted in the new study, published yesterday in The Astronomical Journal, the location of Goblin’s perihelion is similar to what’s observed with Sedna and 2012 VP113, along with other ETNOs. This is a clue to astronomers that something potentially big, i.e. a super-Earth, is pushing these objects into similar types of orbits.

“These distant objects are like breadcrumbs leading us to Planet Nine,” said Sheppard. “The more of them we can find, the better we can understand the outer Solar System and the possible planet that we think is shaping their orbits—a discovery that would redefine our knowledge of the Solar System’s evolution.”

With the help of study co-author Nathan Kaib from the University of Oklahoma, the researchers ran various computer simulations. In most cases, the hypothetical Planet Nine prevented Goblin from approaching too closely—an effect referred to as gravitational shepherding. This effect could potentially explain why other ETNOs have similar orbits.

“What makes this result really interesting is that Planet Nine seems to affect 2015 TG387 the same way as all the other extremely distant Solar System objects. These simulations do not prove that there’s another massive planet in our Solar System, but they are further evidence that something big could be out there,” said Trujillo.

Caltech astronomers Konstantin Batygin and Mike Brown proposed the existence of Planet Nine back in 2016. When asked if the new study bolsters their argument, Batygin said, “Absolutely.”

“The orbits of long-period Kuiper belt objects are clustered together in space,” Batygin, who wasn’t involved with the new study, told Gizmodo. “This clustering can only be maintained if the Solar System hosts an additional—yet unseen—super-Earth type planet. This object sits right in the middle of the cluster, and adds yet another data point to the evidence pointing to Planet Nine.”

Astronomer Carlos de la Fuente Marcos from Complutense University of Madrid, not affiliated with the new study, said he like the new paper and that the survey was “state-of-the-art” and the conclusions reached “sound and robust.” He also agrees that the discovery adds credence to the existence of Planet Nine.

“2015 TG387 is barely interacting with the known planets, yet its orbit is very elongated,” Marcos told Gizmodo. “Planetary formation processes are unable to produce very eccentric orbits by themselves, discrete gravitational interactions—encounters with massive perturbers—are needed in order to create such unusual orbits. The region travelled by this new object is assumed to be devoid of large perturbers, such as planets, yet the object is there, following this very elongated orbit.”

Few alternatives are possible, said Marcos. Either Goblin was thrown into its current orbital path by something that happened during the formation of the Solar System, or it reached its present-day orbit as a result of a more recent interaction with a yet-to-observed planet, that is, Planet Nine.

Daniel Brown, an astrophysicist at Nottingham Trent University, said the authors presented a “compelling case” overall. He was particularly excited by the discovery of a third Inner Oort Cloud object. Brown liked how the researchers’ simulations took various gravitational effects into account that “could impact upon the motion of these IOCs,” while simultaneously pointing out how “a proposed Planet Nine could stabilise the orbit of this new object and influence its behaviour.”

However, Brown says some gravitational effects could include random encounters with nearby stars that are, by their nature, unpredictable in their pattern.

“We know a possible average behaviour but not enough to be able to predict their impact upon only a few objects. Data for many more IOCs would be needed to explore the impact of stellar encounters,” Brown told Gizmodo. “Furthermore, the IOCs discovered were found by looking in a region predicted by the proposed orbit of Planet Nine. Therefore, the discovery of such IOCs is slightly misleading and what we would call biased. A survey that hunts for IOCs in all directions equally would shed more light upon the problem.”

Given the extreme distances involved, however, Brown admits this presents a very challenging proposition.

With the existence of 2015 TG387 confirmed, we can start to imagine a mission to this distant rock. When we asked Mike Brown if we should visit Goblin, he said there’s absolutely “no reason” to send a probe. As an individual object, he said it’s “uninteresting,” and that its importance “is what it tells us about the gravitational forces around us rather than about itself.”

The other astronomers we spoke to, however, thought a mission to the Goblin might be a good idea, but they admitted it would be a massive logistical challenge given the extreme distances involved. The New Horizon probe, for example, will visit Kuiper Belt object Ultimate Thule, aka MU69, on New Year’s Day 2019. This object is 40 to 50 times further away than Earth is from the Sun, and the probe has been travelling since 2006. To reach Goblin or a proposed Planet Nine, it would be four to five times that journey, or even further still.

Should we ever achieve this immense challenge, however, Daniel Brown said we stand to learn about the chemical and structural composition of IOCs, giving us “even more understanding of how our Solar System was formed.” And should we ever visit a Planet Nine, it would change our conception of what planets look like and further help us understand the structure of our Solar System, he said.

First things first, however: We need to find Planet Nine. If it even exists. [The Astronomical Journal]