Indonesia is reeling from a series of geologically-triggered disasters. While it was still assessing the fallout from August’s deadly Lombok earthquake, a major earthquake on 28 September triggered a tsunami that slammed into Central Sulawesi. According to the latest UN reports, this disaster robbed at least 2,010 people of their lives, with 700 still reported missing.

The tragedy in Sulawesi may be falling out of the news cycle, but the recovery efforts there are now in full swing. For emergency responders, the hard work of getting supplies, shelter, healthcare and education to those in need is just beginning. It hasn’t been easy.

“The population is in shock, to be quite frank,” said Susan Mangicaro, the Indonesia response management team leader at International Medical Corps.

The quake, tsunami and associated landslides in late September destroyed or severely damaged 67,000 homes, leaving 330,000 people without proper shelters. Marc Vergara, chief of communications for UNICEF, said that entire neighbourhoods in Central Sulawesi “have simply vanished, literally erased from the map.” Tens of thousands of displaced people are being packed into temporary emergency shelters where limited aid can be administered.

State officials with Indonesia’s national disaster management authority (BNPB) and the military are leading the recovery efforts. Right now, those officials are still working out what type of aid needs prioritising and who might be best placed to help hand it out. Meanwhile, international NGOs and local partners that have received permission to work alongside the BNPB are working round the clock to fill in the gaps and do what they can.

Maya Kroitoru, the American Jewish Joint Distribution Committee’s director of operations for disaster relief and development, said that upon arrival in Sulawesi in the days following the tsunami, the scene was “desperate and grim.”

“The population is in shock.”

She described how people lacking food and water plundered aid lorries, how the bodies of the dead were still scattered along the road, and how her team of aid workers waited in line for seven hours to enter the city of Palu where the full force of the tsunami struck. She described the city as “paralysed.”

Several weeks later, getting help to the afflicted sites is still proving immensely difficult. The airport at Palu was extensively damaged, and roads leading to the city are covered in mudslides. Journeys that should take 8-10 hours are taking 20-25 instead, according to Mangicaro.

The dire situation has been exacerbated by heavy disruption to the region’s already sub-standard infrastructure. Water and sewerage systems have been knocked out completely in tsunami-hit Palu and Donggala. In plenty of regions, electricity is down and cell phone communications are been extremely limited.

“The main priorities for all actors on the ground is to prevent further emergencies from happening,” said Daniel von Rège, the Doctors Without Borders country director for Indonesia. “Here we’re talking about mainly reducing the spread of diseases linked to lack of clean water for drinking, washing and cooking.” 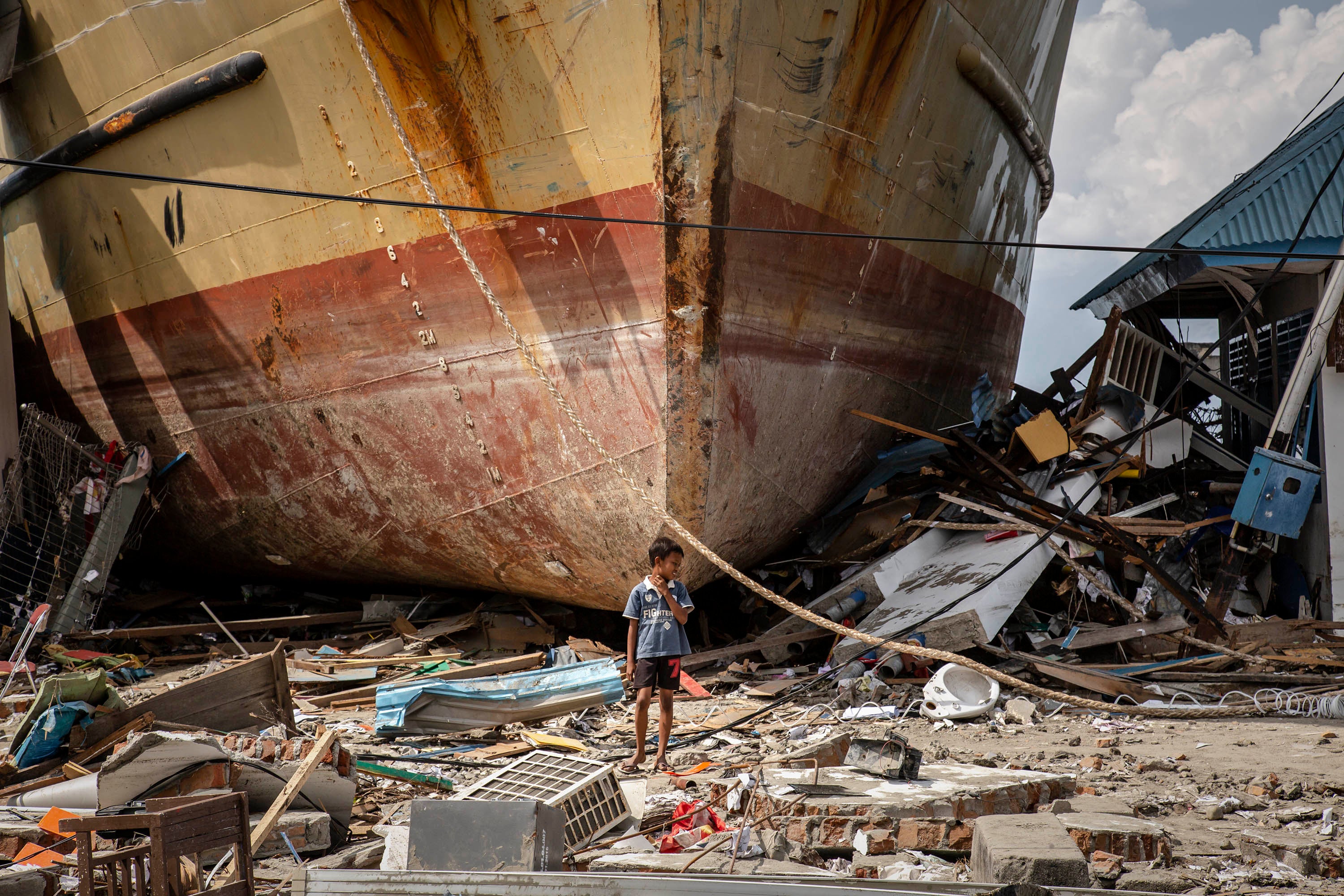 A boy stands in front of a ship and rubble stranded ashore in wake of the tsunami that struck Central Sulawesi. (Photo: AP)

Electrical generators, water purification kits, health services—both mental and physical—and the management of vector-borne diseases are at the top of the list. Vergara said that food is now somewhat less of a problem that it was in the immediate aftermath of the disaster, although various aid agencies have said that there are still reports of communities being cut off from basic supplies.

UNICEF is working with the Ministry of Education to get kids back to school as quickly as possible—no easy feat after 2,700 schools were damaged. The plan is to set up temporary tent classrooms while training teachers to cater to the children who need their education to continue.

“Education is a tool for recovery,” Vergara said, adding that restoring a sense of normalcy is important. This is difficult for many reasons, including the fact that “many residents are now afraid of being so close to the sea.”

The ocean isn’t all they have to fear. During disasters like these, crime rates also rise, exacerbated by the wilful spread of hoaxes and misinformation. According to a study by the International Federation of Red Cross and Red Crescent Societies, gender-based violence can rise following natural disasters, too.

And a high number of children have been separated from their families, placing them at risk of sexual exploitation, violence and trafficking. So far, working alongside the Ministry of Social Affairs, UNICEF has helped to identify 61 such children, and three have been reunited with their parents. Sadly, many are feared to have been orphaned.

As is always the case, these disasters didn’t affect everyone equally. “It is the very vulnerable and poor who are most in danger when these disasters strike,” Kroitoru said.

“People fear being forgotten once the cameras are gone.”

Plenty of NGOs hire local staff, as they know the affected population, language, customs and culture best. Sadly, some of those local aid workers have been swept up in the disaster too. Mangicaro of International Medical Corps said that one of their in-country aid worker’s homes was destroyed by the tsunami, but that he and his family were physically unharmed. Immediately after the disaster struck, he began an on-site assessment, even though he had to sleep outside.

It’s not clear how long recovery will take. Lessons can be drawn from the past disasters—like the devastating 2004 Indian Ocean tsunami, which killed 230,000 people across 14 countries—but only to a certain extent. No two disasters are exactly alike.

Despite the unknowns, first responders do know that certain things must always be done after a disaster strikes.

“Building resilience is vital. Training, education and assisting the local population is the best way you can help out,” Mangicaro explained.

Indeed, although there’s a debate as to what extent Indonesia’s current early warning system may have failed and contributed to the crisis, seismologists have stressed that plays second fiddle to public awareness of natural hazards. Effective safety advice, tailored to the region’s specific geology and society, needs to be properly disseminated through community-driven initiatives.

Long term, infrastructural reconstruction and restoration will also be vital. In an ideal world, earthquake-proof building codes would be applied and reinforced, and tsunami barriers would be set up in vulnerable areas. This, however, depends entirely on resource availability and the government’s willingness to act, both of which are lacking at present in Indonesia.

Kroitoru explained that it’s critical for everyone to understand that “the emergency does not end when the headlines recede.”

“People fear being forgotten once the cameras are gone,” Vergara said. Practical help is required for communities in Sulawesi, but “they also value dignity and emotional support” too.