Julian Assange threatened legal action against the country of Ecuador today. What’s Assange upset about? The WikiLeaks founder doesn’t like that Ecuador has cut off his internet access and more or less told him to clean up his room.

Assange has been hiding out in Ecuador’s embassy in London since June of 2012, when he bailed on a court hearing about sexual assault allegations against him in Sweden (all investigations have subsequently been dropped). Ecuador gave Assange diplomatic asylum, but there’s always been friction between the white-haired shit-stirrer and his Ecuadorian hosts.

The most recent controversies have involved everything from Assange’s political speech and international election tampering to the fact that Assange doesn’t clean his bathroom properly. Ecuador also claims that Assange isn’t taking proper care of his cat. Assange’s internet was cut back in March.

Assange counters that he should be allowed to say whatever he wants online, even if it’s seen as interfering with the politics of foreign governments. Assange, an Australian citizen, is famously believed to have begged Donald Trump Jr. over Twitter DMs to make a case that Assange should be appointed as Australia’s ambassador to the United States.

“It would be real easy and helpful for your dad to suggest that Australia appoint Assange ambassador to DC,” the WikiLeaks Twitter account said to Donald Trump Jr. roughly a month after the 2016 presidential election.

The WikiLeaks account, which is no longer controlled by Assange, tweeted a link this morning outlining Assange’s complaints. Assange claims his condition is like “solitary confinement,” though he doesn’t mention that he’s free to leave anytime he likes. The statement also didn’t specify precisely how, where, or when this legal action would be taken. 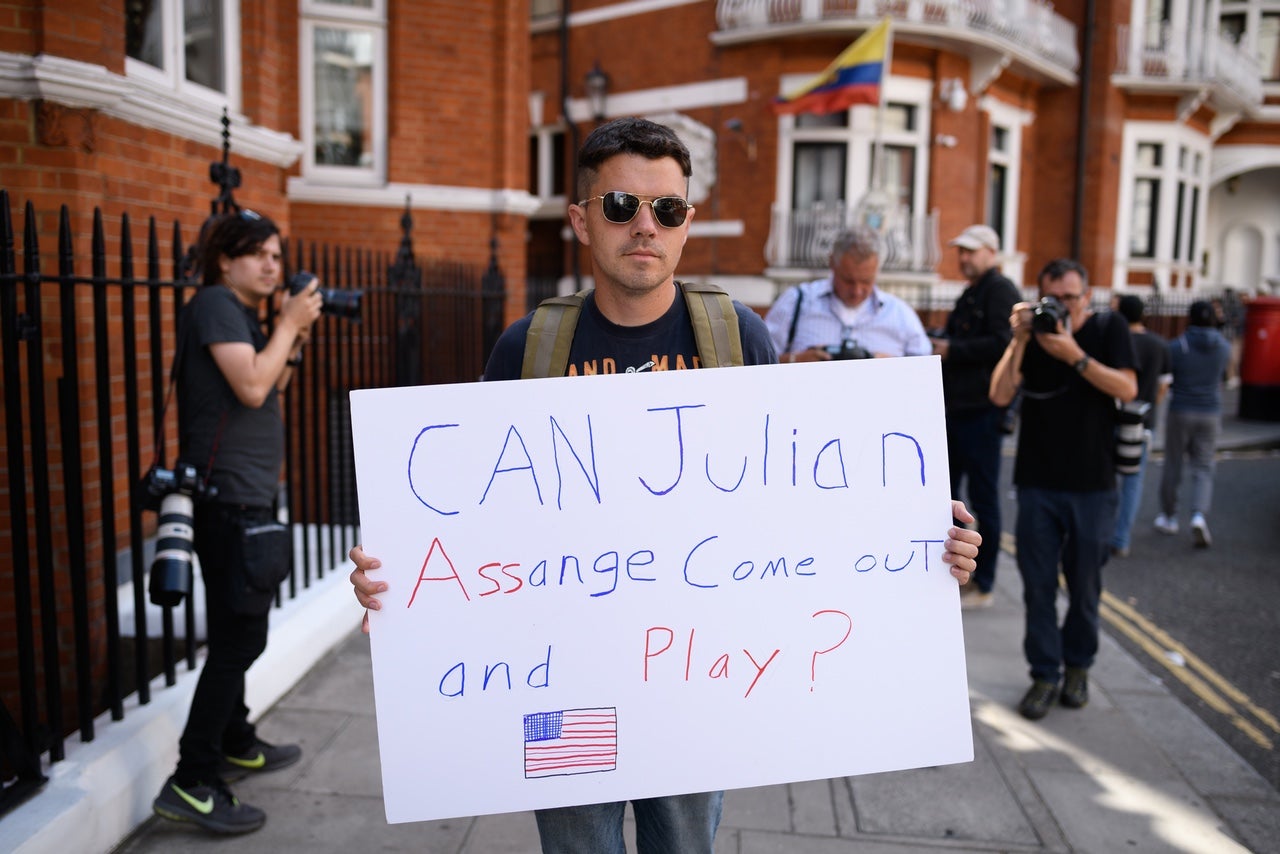 An American man protests against the actions of Wikileaks and Julian Assange outside the Ecuadorian embassy on 30 July 2018 in London, England (Photo: Getty Images)

The full statement from WikiLeaks:

Julian Assange today launched a case accusing the government of Ecuador of violating his fundamental rights and freedoms. WikiLeaks general counsel Baltasar Garzon arrived in Ecuador yesterday to launch the case against the government. The move comes almost seven months after Ecuador threatened to remove his protection and summarily cut off his access to the outside world, including by refusing to allow journalists and human rights organisations to see him, and installing three signal jammers in the embassy to prevent his phone calls and internet access.

Assange’s lawyers are also challenging the legality of the government’s “Special Protocol” reported in the news this week. The protocol makes Assange’s political asylum contingent on censoring his freedom of opinion, speech and association. The protocol also requires journalists, his lawyers and anyone else seeking to see Julian Assange to disclose private or political details such as their social media usernames, the serial numbers and IMEI codes of their phones and tablets with Ecuador—which the Protocol says the government may “share with other agencies”. The Protocol claims the Embassy may seize the property of Mr. Assange or his visitors, and, without a warrant, hand it over to UK authorities.

The United States says that under President Moreno, Ecuador has become a “strategic ally” and the country has re-established security and intelligence cooperation. Earlier this week, US congressmen wrote an open letter to President Moreno stated that in order to advance “crucial matters ... from economic cooperation to counternarcotics assistance to the possible return of a USAID mission to Ecuador, we must first resolve a significant challenge created by your predecessor, Rafael Correa – the status of Julian Assange”. [https://democrats-foreignaffairs.house.gov/_cache/files/a/8/a8a63343-fba7-4ea6-8090-5fb3d9f5d3de/7B8CEDB7545C8C99DEDB0AC0931C9873.10-16-2018-letter-from-engel-ros-lehtinen-to-president-of-ecuador.pdf]

Pressure has mounted on Ecuador to hand Assange over to the UK, especially since Mike Pence’s visit in June in which Moreno and Pence “agreed to remain in close coordination” in relation to Mr. Assange, according to the White House []. The US case against Julian Assange dates back to the Obama administration 2010, but has been expanded under Trump to include the biggest leak in CIA history, Vault 7.

In July 2018, the Inter-American Court on Human Rights issued a ruling imposing obligations on Ecuador to protect Julian Assange from US extradition. The UN in 2016 found Assange was arbitrarily detained at the embassy by the UK, describing his situation as “inhuman and degrading treatment”. Assange’s legal action comes one week after the UN chiefs for Freedom of Expression and Refugees met with President Lenin Moreno in Ecuador.

Last week, Ecuador’s former President Rafael Correa, under whose administration Assange obtained political asylum, said that the current administration is “trying to break him psychologically” and that a deal had been struck during Pence’s visit to Ecuador earlier this year.

Ecuador reportedly tried to get Assange out of the embassy by making him a diplomat to Russia, but the plan was never executed. The authorities in London have said that they’ll arrest Assange if he steps out of the embassy due to the fact that he skipped bail back in 2012.

Again, Assange is technically free to leave the embassy anytime he wants. He even promised to step outside back in 2016 if Chelsea Manning was released from prison. After Manning was released, Assange went back on his promise and said that President Obama only did it to make Assange look like a liar.

It probably wasn’t Obama’s goal, but it certainly did make Assange look like a liar. Thanks Obama. [Twitter]