New photos of a surprisingly rectangular iceberg are offering the full picture of this now-famous Antarctic structure—and it remains weird as hell.

Scientists with NASA’s Operation IceBridge released the original photo last week, but it only showed a portion of the odd iceberg. 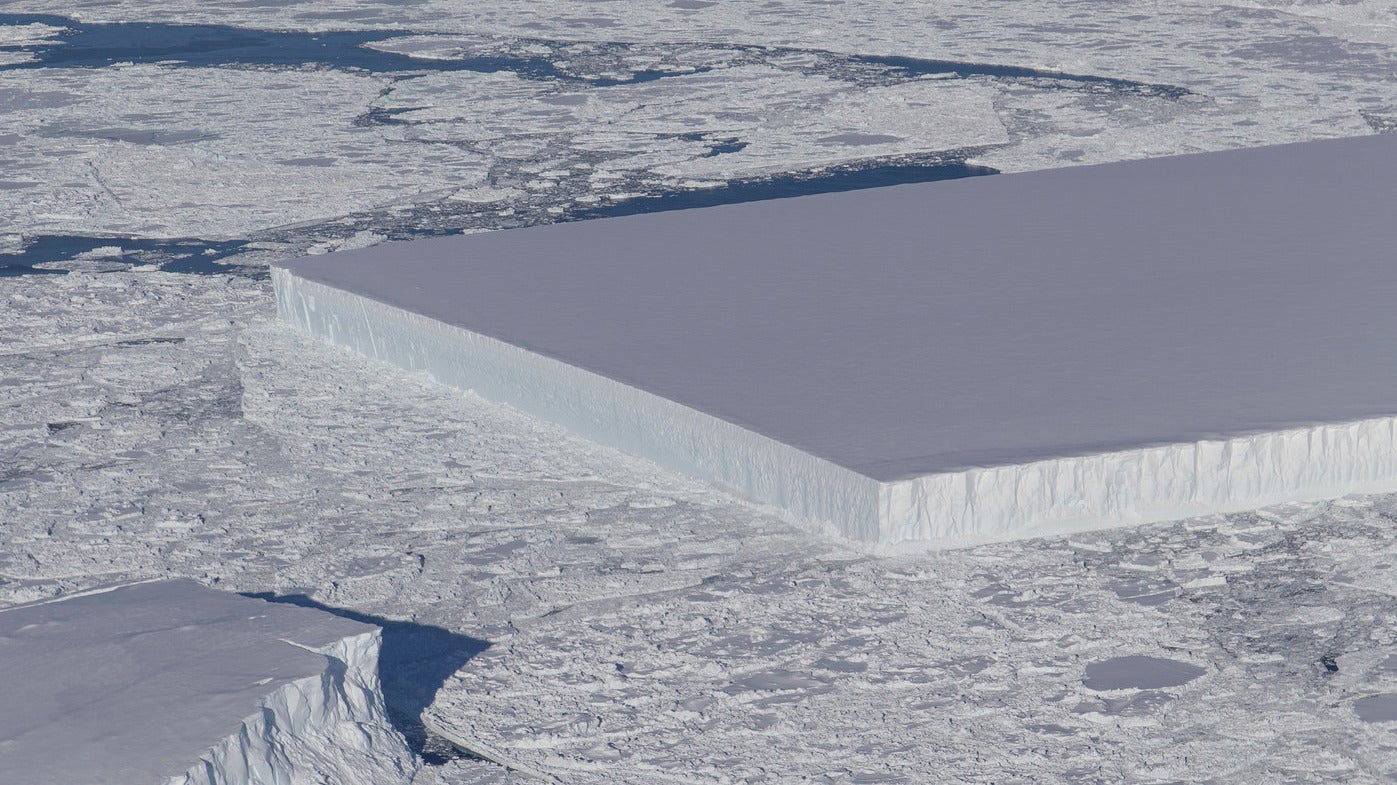 The original photo of the geometric iceberg, which triggered a tremendous global response. (Image: NASA/Jeremy Harbeck)

With much of the ‘berg out of the frame, it wasn’t clear how geometric the entire structure really was. Now, new photos released by IceBridge scientists reveal the iceberg’s true shape. It’s not a perfect rectangle, but it’s still a highly angular quadrilateral. 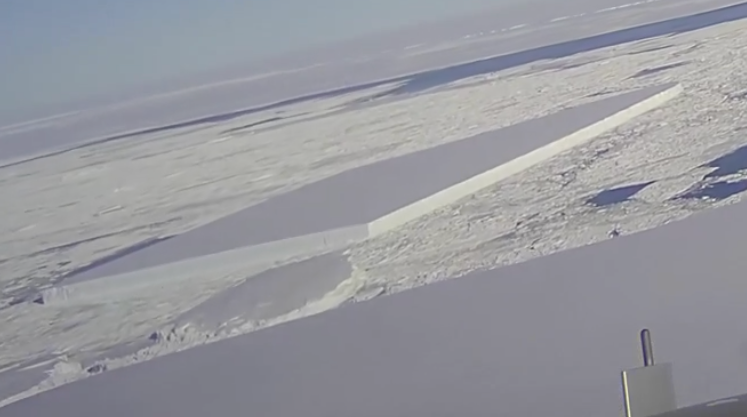 An angled view of the geometric iceberg. (Image: NASA/Operation IceBridge) 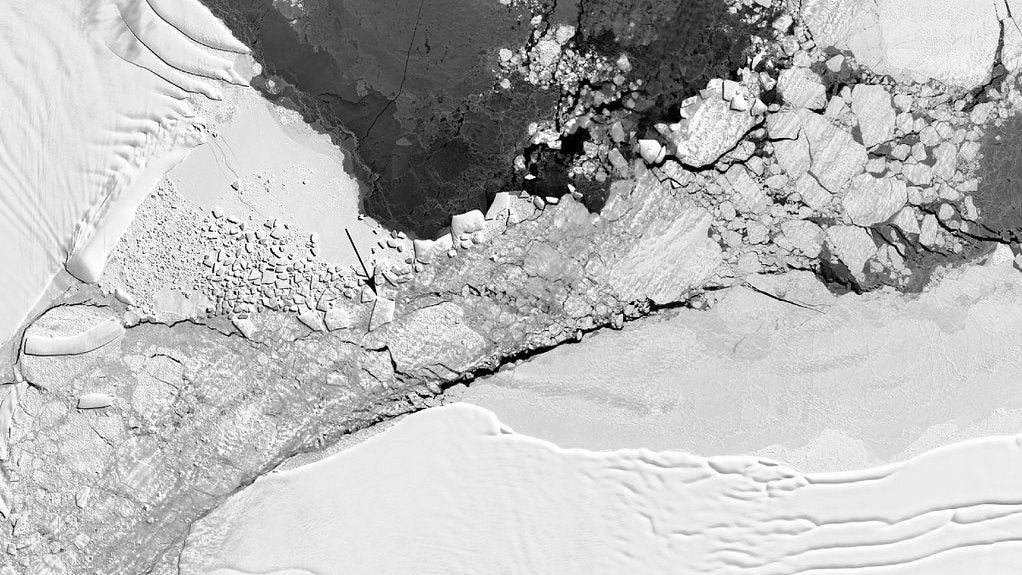 A Landsat 8 view of the freakishly geometric iceberg from space (see arrow at centre left). The photo was taken on 14 October 2018, just two days before Operation IceBridge captured its now-famous photo of the iceberg. (Image: NASA/ Christopher Shuman)

“I thought it was pretty interesting,” said Harbeck in a NASA statement. “I often see icebergs with relatively straight edges, but I’ve not really seen one before with two corners at such right angles like this one had.”

In July 2017, Antarctica’s Larsen C ice shelf released the enormous A68 iceberg, which weighs about 1,000 billion tonnes. Harbeck and his colleagues were investigating this massive structure when the geometric shape was spotted.

“I was actually more interested in capturing the A68 iceberg that we were about to fly over, but I thought this rectangular iceberg was visually interesting and fairly photogenic, so on a lark, I just took a couple photos,” Harbeck said. 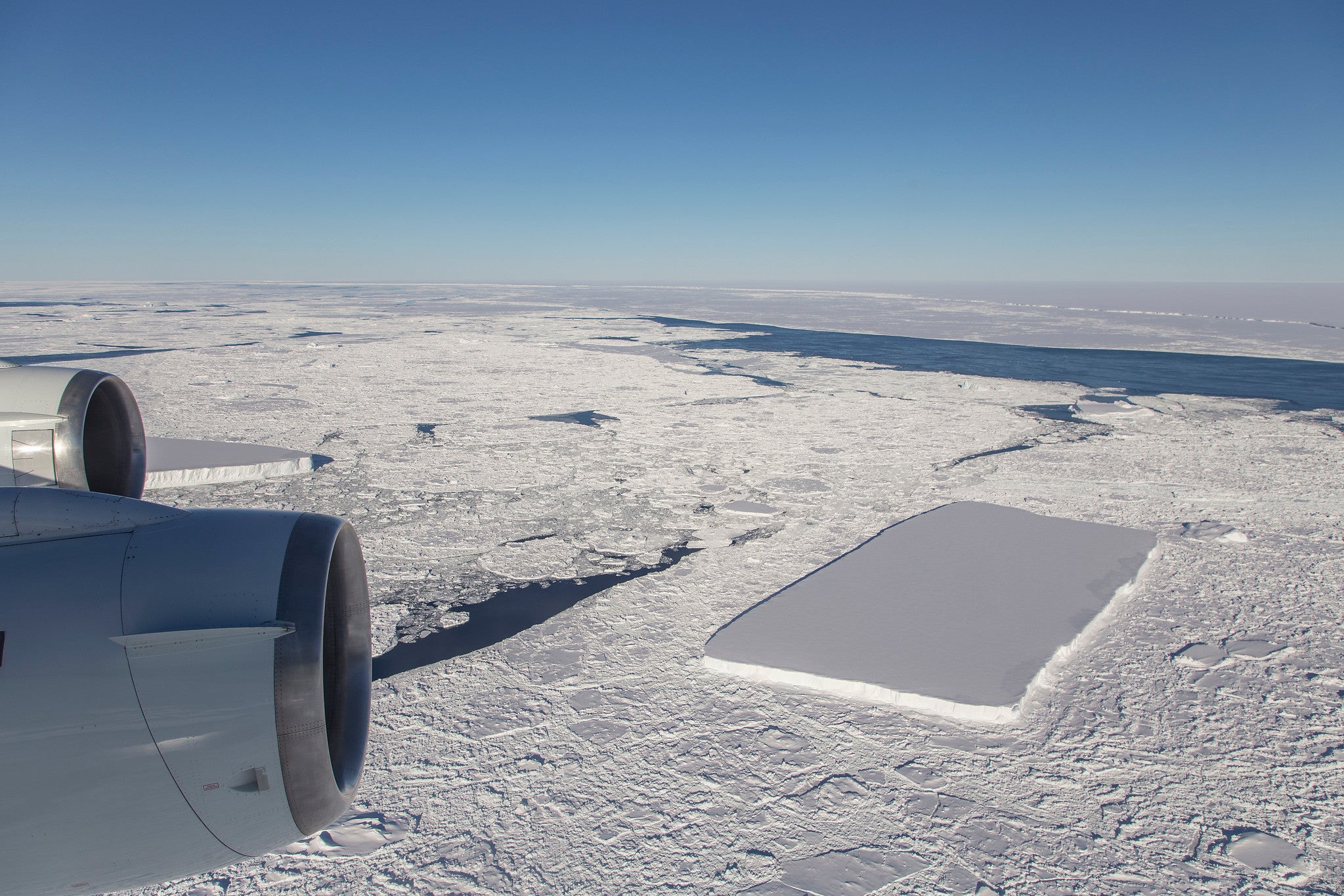 Another rectangular iceberg spotted by the IceBridge team. At the far left is the original geometric iceberg, with the massive A68 Iceberg in the background. (Image: NASA/Jeremy Harbeck)

Interestingly, Harbeck spotted a second rectangular iceberg during the same 16 October 2018 flyby. In the photo above, you can actually see three icebergs of note: the now-famous freakishly geometric iceberg at far left (slightly obscured by the plane’s engines), the new tabular iceberg, and off to the horizon, the A68 iceberg. Yes, it’s that huge—the expanse along the horizon line is a free-floating iceberg measuring about 100 kilometres (60 miles) in length and about 30 kilometres (18 miles) wide).

Here are some other photos of tabular icebergs, many of which were produced by the Larsen C ice shelf during the A68 calving event. 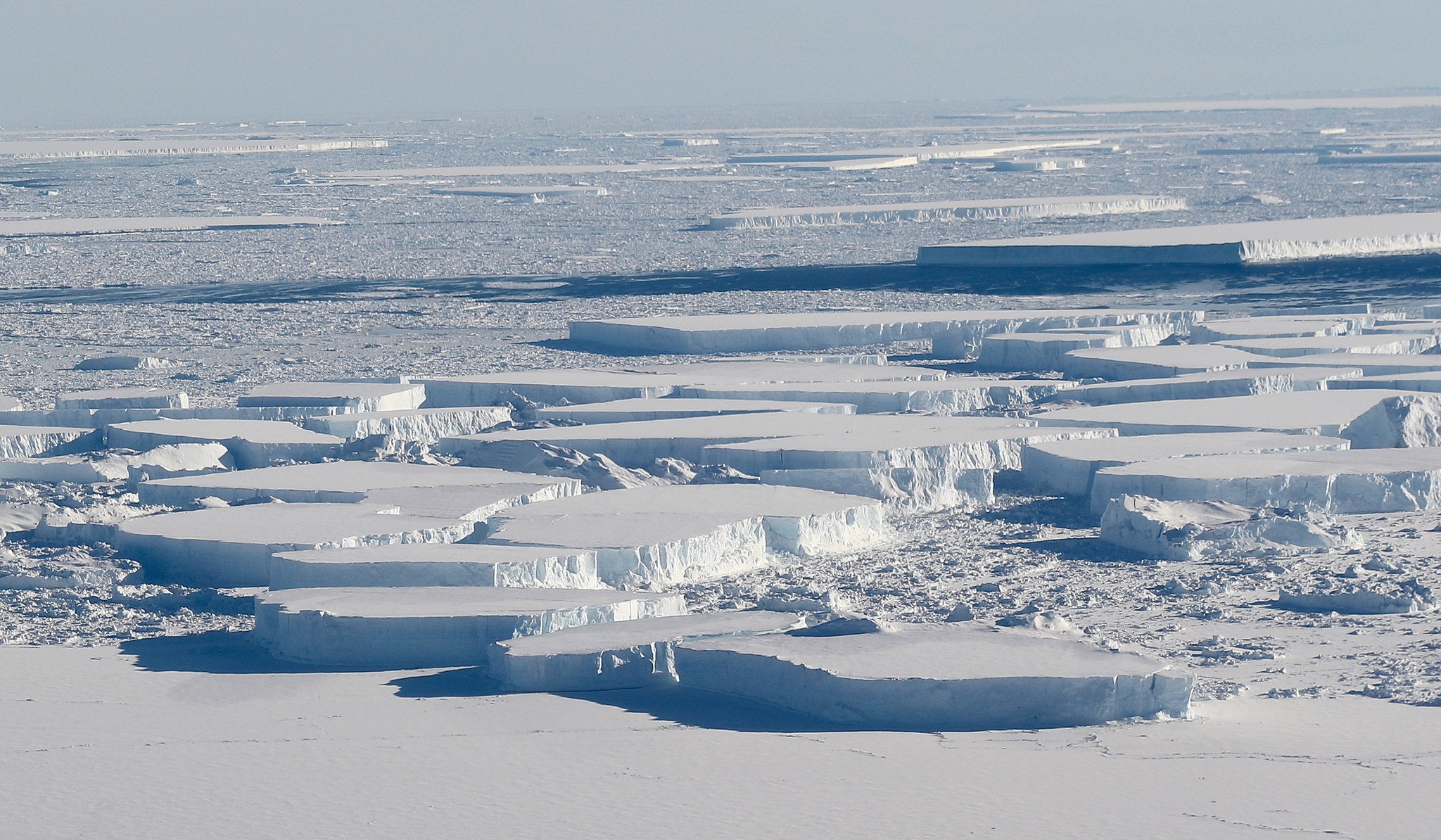 Tabular icebergs seen in the vicinity of iceberg A68. These objects are remnants of the calving event that produced A68. (Image: NASA/Jefferson Beck) 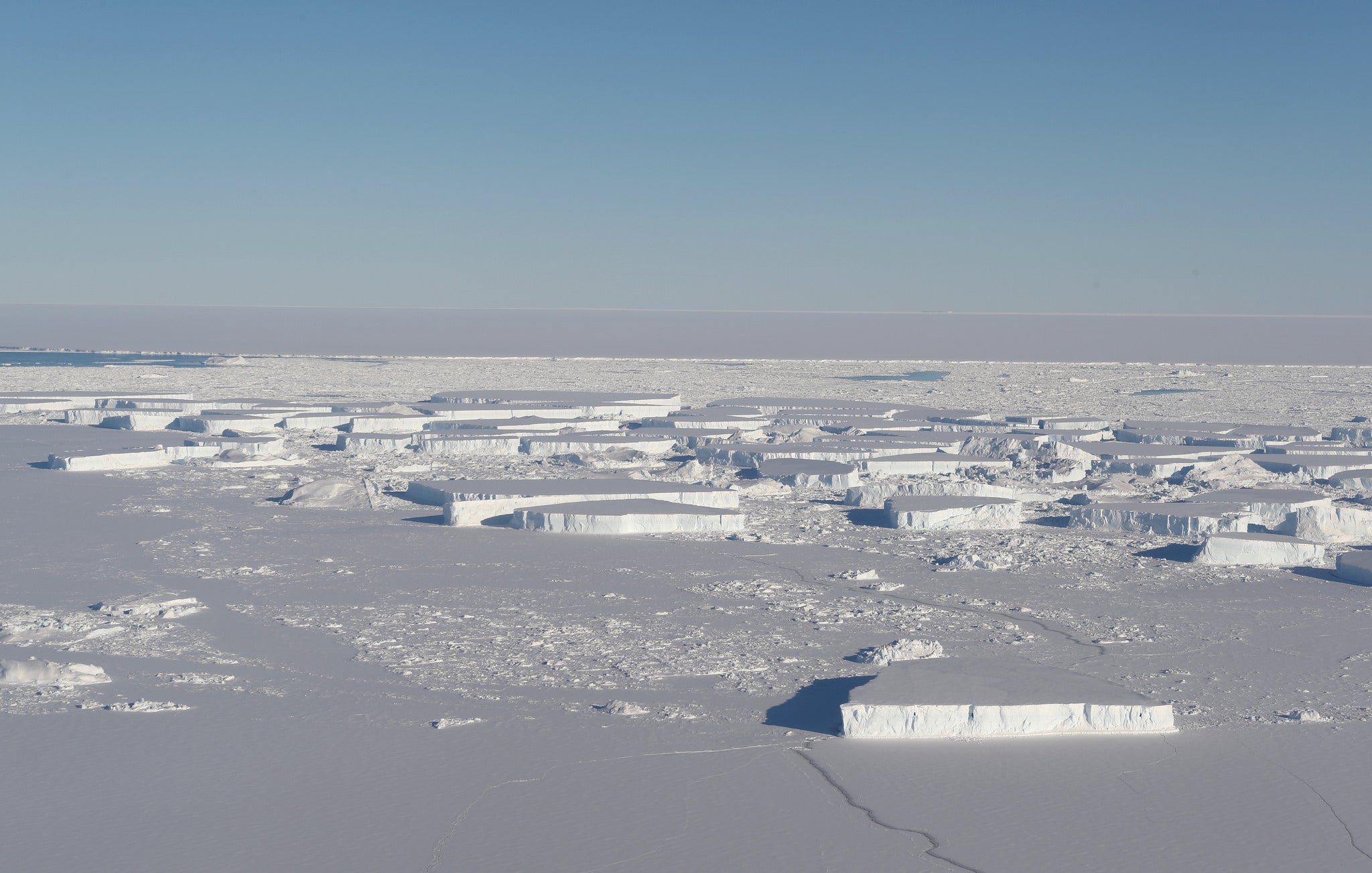 Tabular icebergs, with the massive A68 iceberg in the background. (Image: NASA/Jefferson Beck)

NASA’s Operation IceBridge is an ongoing mission to monitor polar regions and track the planet’s global climate system. It’s currently in the midst of a five-week project to chart icebergs in the Northern Antarctic Peninsula, a mission that’s scheduled to conclude on 18 November. There’s still plenty of time left in the project, so hopefully the scientists will uncover more Antarctic anomalies. [NASA]