Australian scientists have discovered a previously unknown chain of volcanic seamounts near Tasmania. The area appears to be brimming with marine life, including a surprising number of whales who may be using the undersea volcanoes as a navigational tool.

The volcanic chain was discovered by scientists from the Australian National University and CSIRO, Australia’s national science agency, while on a 25-day mission aboard the research vessel Investigator to conduct detailed seafloor maps of the region. The undersea volcanoes are about 250 miles (400 kilometres) east of Tasmania, and they’re quite deep.

“Our multibeam mapping has revealed in vibrant detail, for the first time, a chain of volcanic seamounts rising up from an abyssal plain about 5,000 metres [16,400 feet] deep,” Tara Martin, a member of the CSIRO mapping team, said in a statement. “The seamounts vary in size and shape, with some having sharp peaks while others have wide flat plateaus, dotted with small conical hills that would have been formed by ancient volcanic activity.” 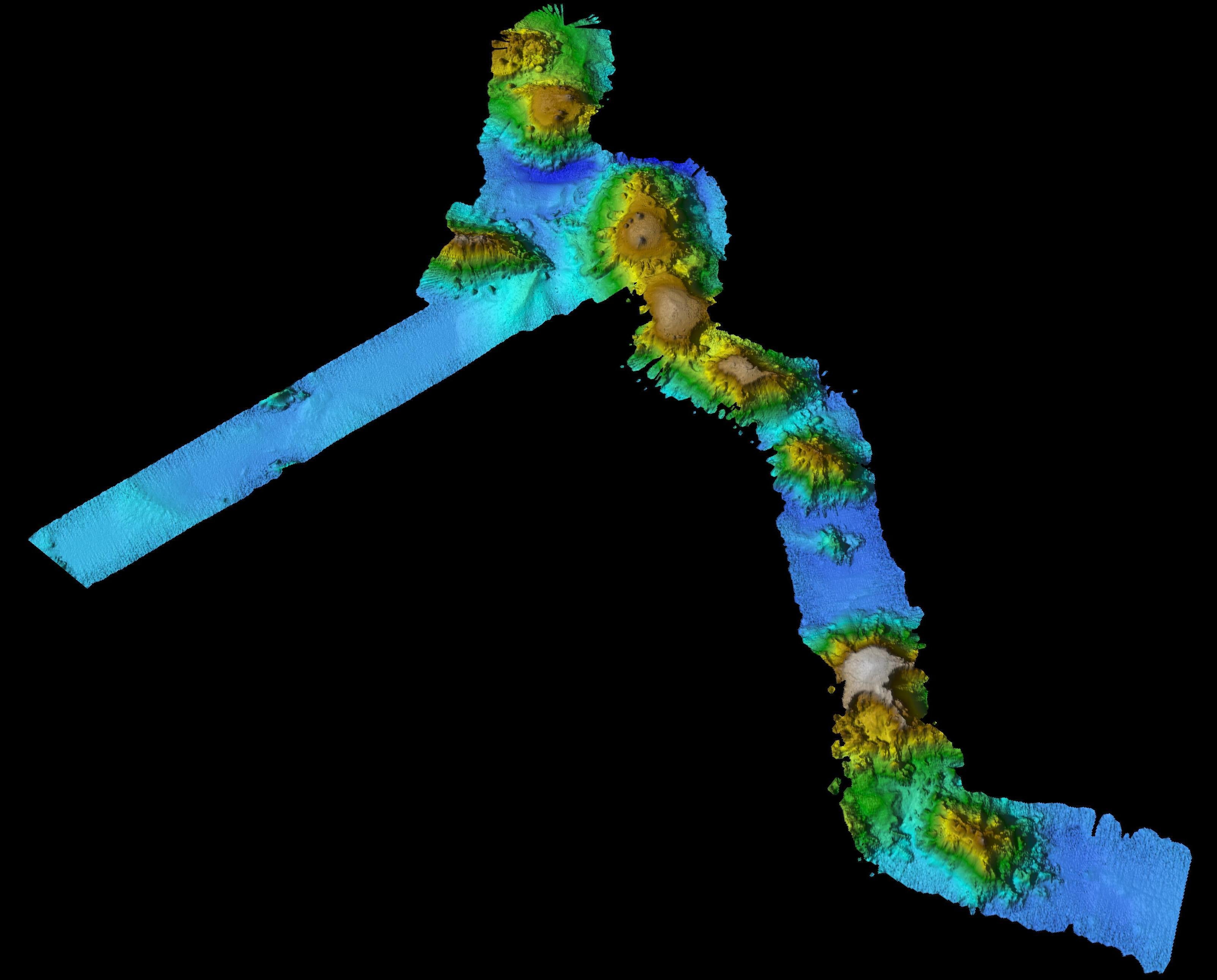 The tallest of the seamounts extends 3,000 metres (9,800 feet) from the seafloor, so they’re not tiny. It’s hard to believe that something so large has gone undetected for so long, but our oceans are notoriously understudied. A mere 20 per cent of Earth’s oceans has been explored, according to America's National Oceanic and Atmospheric Administration.

“Having detailed maps of such areas is important to help us better manage and protect these unique marine environments, and provides a stepping stone for future research,” said Martin. “This is a very diverse landscape and will undoubtedly be a biological hotspot that supports a dazzling array of marine life.”

Indeed, the volcanic chain wasn’t the only thing that caught the eye of the researchers; the seamounts appeared to serve as a kind of mid-ocean oasis for a host of marine organisms. In addition to finding copious amounts of plankton in the area, the researchers observed various seabirds and a surprising number of whales. 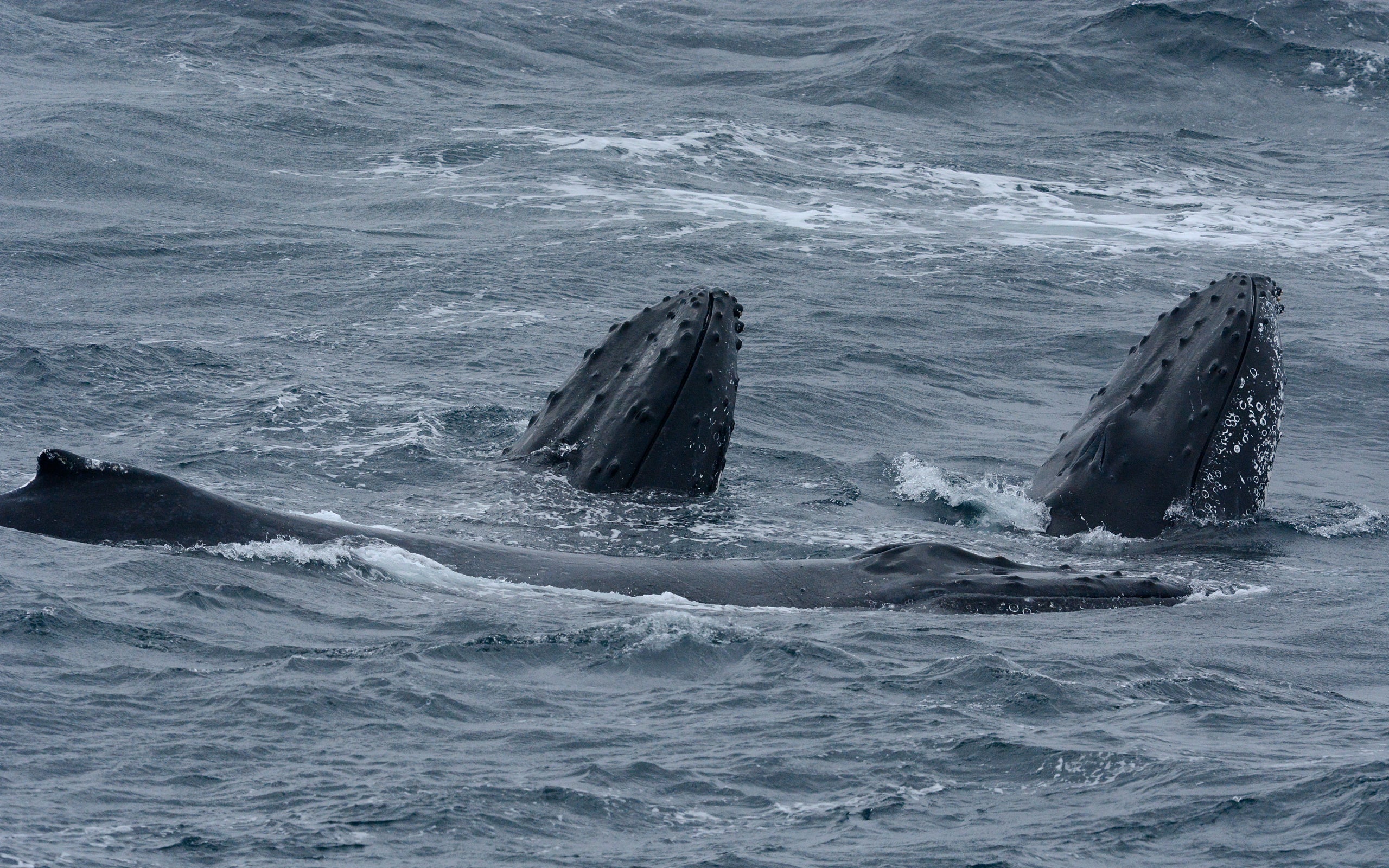 Humpback whales swimming in the waters above the seamounts. (Image: Eric Woehler)

“We estimated that at least 28 individual humpback whales visited us on one day, followed by a pod of 60-80 long-finned pilot whales the next,” Eric Woehler, a research scientist from BirdLife Tasmania who participated in the expedition, said in a statement. “We also saw large numbers of seabirds in the area including four species of albatross and four species of petrel. Clearly, these seamounts are a biological hotspot that supports life, both directly on them, as well as in the ocean above.”

A Southern Giant Petrel seen in the region above the seamounts. (Image: Eric Woehler)

The team is now eager to learn more about this previously unknown volcanic chain. The’re planning to return later this year for two missions aboard the Investigator in November and December, at which time they’ll capture hi-res video of marine life and collect rock samples. It would be good to know, for example, if these seamounts have exhibited any recent volcanic activity, or if any hydrothermal vents are on the seafloor.

There’s a lot of cool life above these volcanic seamounts, but the real prize could be waiting at the bottom. Two years ago, for example, researchers found a batch of unknown sea creatures, such as a new species of scaleworm, near a hydrothermal vent about 1,200 miles (2,000 kilometres) southeast of Madagascar. And later this year, fingers crossed, scientists will be able to explore the mysterious seafloor exposed by Antarctica’s gigantic A-68 iceberg.

So who knows what they might find near these seamounts? We’ll be following the team’s progress to keep you up to date on any discoveries. [CSIRO]