The 13 Most Iconic TV Witches

Between the CW’s new Charmed and Netflix’s Chilling Adventures of Sabrina, you might be fooled into thinking television witches are having a particular moment. But the truth is, witches have been small-screen staples for over 50 years. Here are 13 TV witches who’ve kept us spellbound.

The O.G. witchy sitcom debuted in 1964 and ran for eight seasons on ABC, chronicling the domestic affairs of Samantha Stevens (Elizabeth Montgomery), who diligently strives to be a normal housewife even though she could take care of any task by simply twitching her nose. Agnes Moorehead played Sam’s theatrical mother, Endora, whose main delight in life was tormenting her mortal son-in-law, “Durwood” (played by Dick York and, in later seasons, Dick Sargent), and though Sam was always the centre of the action, Bewitched introduced a slew of other supernatural characters over the years – including Endora’s campy brother Arthur (Hollywood Squares mainstay Paul Lynde) and cheeky witch doctor Dr. Bombay (Bernard Fox).

Witchiepoo with her magic wand and (briefly) Freddy the flute.

H.R. Pufnstuf, the early-1970s flagship show of the trippy TV empire dreamed up by Sid and Marty Krofft, wasn’t scary in the traditional sense. After all, it was a Saturday morning show filled with puppets and actors flailing around in big, puffy costumes to entertain pint-sized viewers. But flamboyant antagonist Witchiepoo, played by Billie Hayes, could inspire more than a twinge of terror – her shrill cackle was a perfect approximation of Margaret Hamilton’s Wicked Witch of the West from The Wizard of Oz. That said, Witchiepoo was way more psychotically obsessed with Freddy the talking flute – owned by the show’s jolly teenage protagonist, Jimmy (Jack Wild) – than the Wicked Witch ever was with Dorothy’s ruby slippers.

Though she’s not a witch in the traditional sense, Melisandre – a Red Priestess in the service of R’hllor, the Lord of Light – is one of Game of Thrones’ most magical characters, masking her true advanced age in the guise of a young, beautiful woman. Her powers of prophecy are far from foolproof, and her staunch support of wannabe-king Stannis Baratheon yielded some horrifying collateral damage (including, but not limited to, the hideously cruel death of Stannis’ young daughter, who was burned alive as a sacrifice). But the Red Woman does manage to bring Jon Snow back from the dead, and later helps engineer that crucial first meeting between Jon Snow and Daenerys Targaryen.

With some of its characters popping up on the current Apocalypse, there’s no better time to remember American Horror Story’s triumphantly cheesy Coven season – the flashback-filled tale of some of Salem’s most tortured raising up a new generation of drama-plagued young witches. American Horror Story is at its best when it goes way over the top, and Coven had it all: fashion, Stevie Nicks, zombies, voodoo, resurrections, every spooky character you learn about on a “haunted” tour of New Orleans (the Axeman, Marie Laveau, Delphine LaLaurie, etc.), and many flavors of cruel and cunning magic. It’s hard to pick one standout witch among the many that appear – and no disrespect to the performances of Sarah Paulson and Jessica Lange – but the flamboyantly stylish Myrtle Snow (played by Francis Conroy) is our pick for the ultimate grand Supreme.

There are multiple vampire and/or monster TV shows that also feature witch characters, but we’d pick Buffy’s Willow (played by Alyson Hannigan) before conjuring anyone from The Vampire Diaries, Supernatural, or True Blood. Maybe it’s because she reminds us of our nerdy high-school selves...except we didn’t have magical abilities just waiting to be nurtured and unleashed. Over seven seasons of Buffy, Willow’s role expanded from slayer sidekick to major supporting character – and eventually, a stint as full-on villain in the sixth season, when she started using her powers for deadly revenge after the death of Tara, her beloved. Hannigan’s honest, endearing performance as Willow made the character a consistent fan favorite, and by the end, Willow was just as important as Buffy when it came to saving the world. (But all these years later, it still sucks that the show turned Tara and Willow’s relationship into a “bury your gays” plot device.)

“Sprynge-Fielde,” circa 1649: Witch-burning is all the rage, and the one person to speak out against it is Marge Simpson. Naturally, that means she’s the next person accused of consorting with Satan – but as it turns out, it’s true! The segment (with a classic Simpsons punny title, “Easy-Bake Coven”) ends up being an explanation for how trick-or-treating began, as Marge and her sisters decide to eat delicious gingerbread men instead of gobbling up Ned Flanders’ gamey sons. But the episode also offers the joyous sight of a green-skinned Marge riding a broomstick, mad as hell and unleashing a plague of red-eyed bats from her towering hairdo.

Piper (Holly Marie Combs) and Phoebe (Alyssa Milano) cast love spells for themselves and try to save their older sister, Prue (Shannen Doherty), from a lusty demon in the season one episode “Dream Sorcerer.”

On a mid-1990s roll after Beverly Hills 90210 and 7th Heaven, superproducer Aaron Spelling (also the guy behind Charlie’s Angels, The Love Boat, and a zillion other hit shows) branched out into the supernatural with Charmed, which put a witchy spin on his proven formula. Though the show’s cast didn’t remain consistent over its eight seasons, its basic premise stayed the same, following a trio of stylish, magical sisters who deal with ordinary family and relationship dramas on top of a steady stream of demonic dilemmas. Though it certainly flirted with darkness, Charmed wasn’t afraid to let its Charmed Ones have fun from time to time – or even get a little silly, as in the memorable episode that tossed Piper (Holly Marie Combs), Phoebe (Alyssa Milano), and Paige (Rose McGowan) into a superhero story and hit “blend.”

A witch, her cat, her boyfriend, and a tiny spaceship.

Netflix’s new Chilling Adventures of Sabrina is coming later this month to show us a darker and more devilish take on the classic Archie Comics story. But for many viewers who grew up on ABC’s “TGIF” sitcoms, Melissa Joan Hart’s upbeat take on the character will forever be the gold standard. Sabrina the Teenage Witch was a high school (and later, college) comedy that put a magical (which is to say ridiculous, surreal, and slapstick-y) spin on situations many non-magical young women might encounter: mean girls, teacher troubles, boyfriend stuff, homework woes, etc. Of course, any time she got into a jam, Sabrina had the help of her equally witchy aunts, as well as her scheming familiar, Salem the cat – though they were sometimes the cause of her latest jam, too.

Timmy and Tabitha, up to no good (obviously).

Soap operas have never been grounded in realism – it’s a genre cliché that presumed-dead characters will have the power to suddenly return, or that entirely new actors can step into long-established roles without causing any story wrinkles whatsoever. But Passions, which aired on NBC from 1999 to 2007, pushed the envelope on several levels with self-referential humour and staggeringly over-the-top plotlines – and it explored the supernatural most gleefully through its resident witch, Tabitha Lenox (played by Juliet Mills). Tabitha got tangled up in all kinds of crazy shit, but the thing she’s most remembered for is Timmy, a doll she created and then brought to life (in the form of actor Josh Ryan Evans) when she needed his assistance, though he wasn’t nearly as dastardly as she was. Passions was known for its pop-culture homages, and Tabitha’s storyline frequently referenced Bewitched – at times even cheekily suggesting she was the same Tabitha from that show, which would, of course, make her Samantha’s daughter (and Endora’s granddaughter). 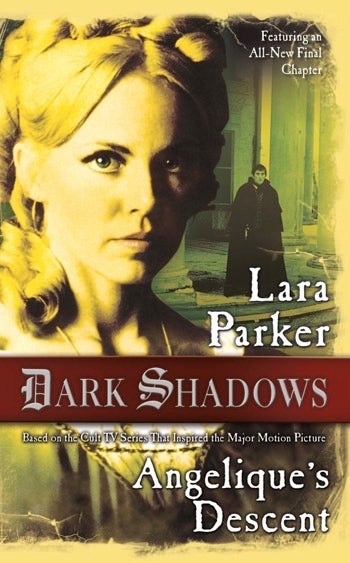 You cannot speak of soap opera witches without mentioning Angelique, one of the key characters on time-shifty 1960s gothic drama Dark Shadows. (Yes, there was a movie...the less said about it, the better.) The hex-happy character actually had different names thanks to various reincarnations, but she was always played by glamorous blonde Lara Parker. The character’s biggest contribution to Dark Shadows lore is that she’s the reason the show’s main character, Barnabas Collins, is a vampire. Their relationship, which spans hundreds of years and includes one marriage and at least two attempted murders, is complicated – and it hasn’t stopped adding new pages. Literally. In recent years, Parker has explored her character’s story by penning a couple of books about Angelique’s life beyond the series.

The Wicked Witch, only pretending to be nice.

If you’re gonna crack into some fairy tales, you’re gonna run into some witches – especially on a long-running fantasy show like ABC’s Once Upon a Time, which dug into every enchanted crevice ever created to pull out characters who lived happily ever after (and/or the opposite). And that includes Zelena, the Wicked Witch of the West (played by Rebecca Mader). Though many of Once Upon a Time’s players also had magical powers – fairy tales are funny like that – only one offered a fresh small-screen take on the biggest, baddest movie witch of them all: The Wizard of Oz’s green-skinned villain. In this version, she has oodles of complicated backstory and sinister character twists (in her real-world guise, she was briefly...a spin instructor!) that even L. Frank Baum could never have dreamed up. Too bad NBC’s Emerald City TV show, which had another intriguing interpretation of the Wicked Witch, didn’t really catch on.

The villainous Rita Repulsa, eternal nemesis of Mighty Morphin Power Rangers’ teenagers with attitude, is not just any ordinary witch – she’s a scenery-chewing alien witch with specific goals, chiefly revolving around her obsession with world domination. She may mostly be remembered for her headdresses and the show’s tendency to use her for comic relief, but as Gizmodo Power Rangers expert James Whitbrook points out, “from a purist’s point of view, Bandora, the character in Kyōryū Sentai Zyuranger who was repurposed as Rita, is straight-up a witch who sold her soul to Satan.” Doesn’t get much witchier than that...and no, we will not be discussing her most recent, donut-happy big-screen iteration.

There are a lot of characters that could’ve made this list – but we didn’t want to just name-check every TV witch who ever cackled over a cauldron (or just, like, looked super-hot while uttering random incantations). Ergo, no shows like Salem or Witches of East End here. But special mention must go to a show aimed at a decidedly younger demographic: The Worst Witch, based on the long-running Jill Murphy book series. It’s a somewhat familiar tale of witches attending magic school, except all the characters are female, and the title character, Mildred Hubble, is adorably disaster-prone (as that title might suggest). Murphy’s books have actually been adapted into multiple series, spin-offs, and TV movies, including a rendition that aired its second season earlier this year on Netflix – but we’ll always prefer the ultra low-budget series, co-starring Rogue One’s Felicity Jones in an early-career role as one of Mildred’s prim teenage classmates.