Around 250,000 years ago, two Neanderthal children were exposed to excessive levels of lead in what is now France, according to new research. It’s the oldest known case of lead exposure in hominin remains—a discovery that’s presenting an obvious question: How could this have possibly happened so long ago?

A new paper published last week in Science Advances sheds new light on the environmental conditions endured by Neanderthal children some 250,000 years ago. Ice Age winters, as the new research suggests, had a profound influence on the health of young Neanderthals. That’s hardly a surprise—but the discovery of lead exposure among two Neanderthal infants most certainly is.

Griffith University archaeologist Tanya Smith, the lead author of the new study, made the discovery while conducting a chemical analysis of Neanderthal teeth uncovered at an archaeological site in southeast France. Teeth are like tree rings, chronicling an individual’s history of chemical and environmental exposure. By studying the growth layers within ancient teeth, researchers can reconstruct a history of exposure during the first three years of life. 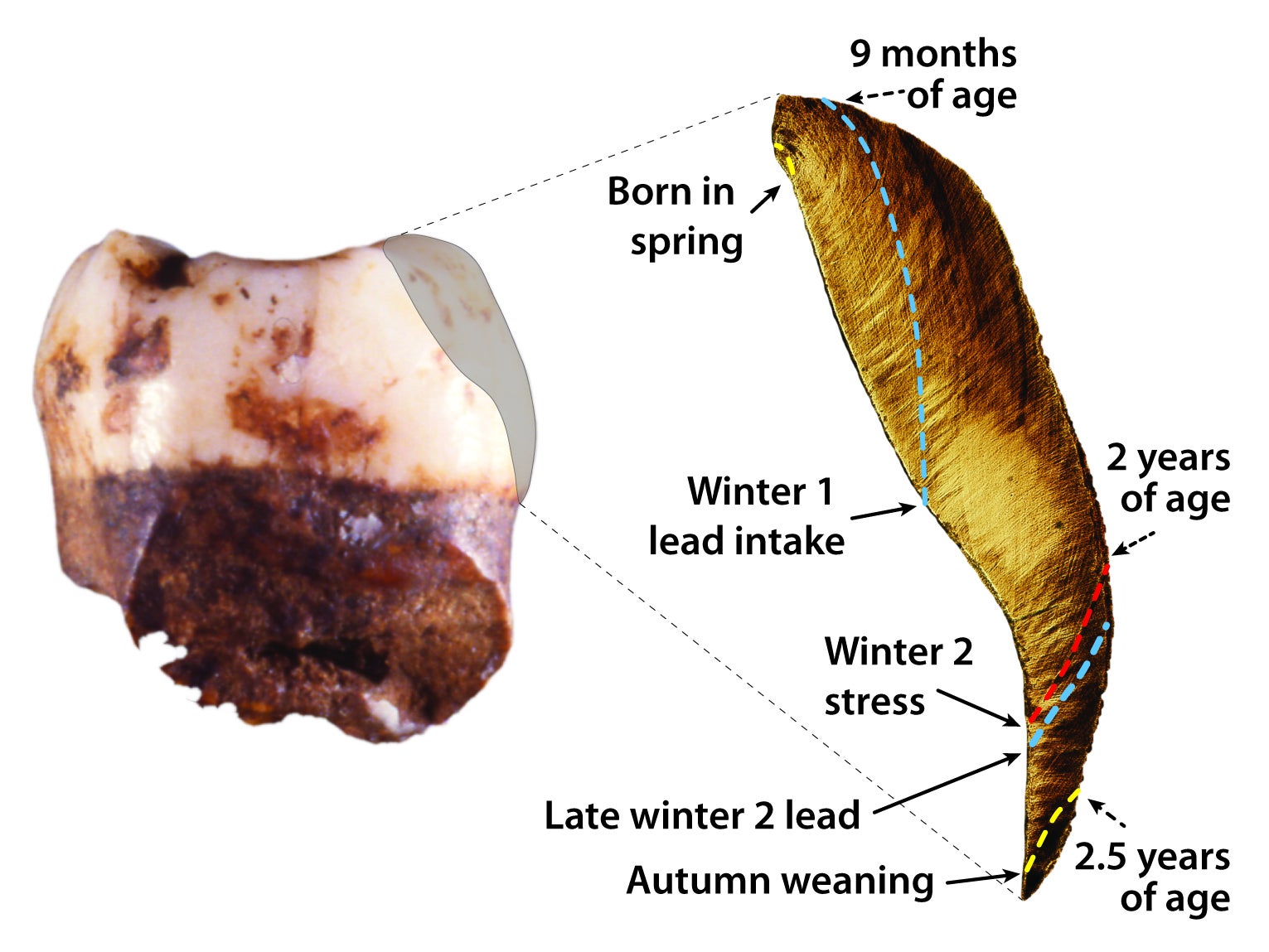 A 250,000-year-old Neanderthal tooth yields an unprecedented record of the seasons of birth, nursing, illness, and lead exposures over the first three years of this child’s life. (Image: Tanya Smith & Daniel Green)

For the study, Smith and her colleagues analysed the teeth of two Neanderthal children, known as specimens Payre 6 and Payre 336, who lived 250,000 years ago. These two teeth, both molars, were found sans skull, making it difficult to assess the overall health and condition of the individuals. The tooth of an anatomically modern human child, Payre 1, was also analysed. This tooth was found at the same site and dated to about 5,000 years ago.

“It wasn’t possible to assign precise ages to the three isolated teeth, but I’ve estimated that the Neanderthal first molar (Payre 6), which was only lightly worn, would have come from an adolescent, as adult Neanderthals show more worn teeth,” Smith told Gizmodo. “The Neanderthal second molar (Payre 336), was more worn, and so I think this was more likely from a young adult.”

As for the modern human’s first molar, it had not erupted or begun to wear down, and the root was incomplete, so it was likely from a child who was around five years old, explained Smith.

As Smith explained to Gizmodo, all three teeth analysed in the study were permanent.

“First molars begin forming a few weeks before birth and continue until about age three, and second molars from about three to six years of age,” she said. “They record the chemistry of what these individuals were eating and drinking as they mineral [within the layers of the teeth], which includes elements in milk.”

Indeed, by measuring levels of barium, oxygen, and lead in the teeth, Smith’s team was able to track the children’s exposure to various climatic conditions, foods, and chemicals at weekly intervals. In turn, this information was related to the children’s health and rate of growth.

“This study reports a major breakthrough in the reconstruction of ancient climates, a significant factor in human evolution, as temperature and precipitation cycles influenced the landscapes and food resources our ancestors relied on,” said Smith in a statement.

The Payre 6 child exhibited elevated levels of the trace element barium until nine months of age—an observation consistent with breastfeeding. These levels dropped slightly and then remained moderate until the child reached the age of 2.5 years, at which time the barium levels dropped dramatically. This suggests a weaning age of 2.5 years, which, interestingly, is the average age of weaning among pre-industrial humans.

Importantly, this is a very small sample size, so the results need to be taken with a grain of salt. What’s more, the Payre 336 Neanderthal child did not exhibit the same barium spikes.

“We estimated that the second molar [from Payre 336] formed between around three to six years of age—so it is possible that the child was no longer nursing at this age,” Smith told Gizmodo. “Alternatively, the tooth showed some environmental modification—meaning that elements in the burial environment may have obscured the nursing signal. This is a common complication of elemental studies.”

Further analyses of other Neanderthal teeth would help to clarify these findings. It’s difficult to extrapolate Neanderthal nursing patterns beyond this one sample.

By studying the oxygen isotopes in the teeth, the researchers were able to detect multi-year patterns in regards to environmental exposure. The Payre 6 Neanderthal child, for example, was born in the spring and was weaned in the autumn.

“Mammals, including humans, show seasonal birth patterns that relate to environmental cycles,” the authors write in the study. “Our results for Payre 6 are consistent with the broad mammalian pattern of bearing offspring during periods of increased food availability.”

Again, a neat observation, but a sample of one is not much to go by.

Revealingly, both Neanderthal children experienced health problems—described by the researchers as “developmental disruptions”—during the cooler periods. The stresses imposed by the Ice Age winter, the authors surmise, took a toll on these young Neanderthals, who showed signs of sickness (in the form of poorly developed tooth enamel) during these periods.

Remarkably, both the Payre 6 and Payre 336 Neanderthals were exposed to lead on at least two occasions during their early life. This is considered the oldest documented exposure to lead in hominin remains. As the how these children were exposed to lead, the scientists can only speculate.

“These high and acute lead lines are indicative of short-term exposure from ingestion of contaminated food or water or inhalation from fires containing lead,” the authors write in the study. “Lead can also come from mothers’ milk, but the divergent patterns of barium and lead in Payre 6 and the acute lead bands in both individuals suggest that mothers’ milk was not the primary source of exposure.”

No level of exposure to lead is considered safe, but the health impacts can be subtle and sometimes delayed. Consequently, the researchers aren’t sure if the lead had any effect on the health of these Neanderthal individuals.

“The lead lines were high—in one case 10 times more than background measurements—but they did not cause any evident disruptions in their teeth,” said Smith. “We can’t know if these exposures had any effect on their brain development or cognition. It would be great to look at more prehistoric individuals from this region in France to see how common these exposures might have been.”

This exposure, the analysis suggests, happened during the cooler seasons. What’s more, this part of France is known to be rich in mineral deposits. It’s possible that the Neanderthals, while seeking shelter from the cold, ventured into caves, resulting in the exposure.

“Traditionally, people thought lead exposure occurred in populations only after industrialisation, but these results show it happened prehistorically, before lead had been widely released into the environment,” Christine Austin, a co-author of the study and an assistant professor at the Icahn School of Medicine at Mount Sinai, said in a statement.

The new study is fascinating, but it suffers from the same thing that afflicts so many other archaeological studies: insufficient evidence from which to draw robust conclusions. These new insights into Neanderthals, while revealing and even plausible, need to be supported by further archaeological evidence. And indeed, that’s exactly where this team is headed next.

“Our team plans to analyse more teeth... and investigate how lead exposures may have affected their health and how that may relate to how our bodies respond to lead today,” said Austin.

In the meantime, this study is yet another reminder of the links we share with our extinct cousins. Like Neanderthals, we struggle with illnesses during the winter, and we nurse for around 2.5 years. Yet for reasons that still aren’t entirely clear, the long reign of the Neanderthals came to end around 45,000 years ago at the end of the last Ice Age. There’s clearly much still to learn about these remarkable human relatives. [Science Advances]