Earlier this year, Google revamped its search engine on mobile devices, adding tabs for “the most common and relevant subtopics” to the top of results. Search for, say, The Grinch, on your phone, and you might see a suggested tab listing upcoming showtimes. Or, until Wednesday, one called “fanfiction” that surfaced stories like “How the Grinch Stole My Virginity.”

Fan fiction—in case you need a refresher—is the term for original stories about TV shows, movies, and other works of fiction written by fans of the work. As you might expect, these texts regularly describe popular characters having sex with each other, ones from other fictional universes, or even versions of the authors themselves. Which is fine! But these stories probably shouldn’t be at the top of the page when Sally searches for “shrek 2” on the iPad.

In tests this week, Gizmodo found that Google most often showed the fan fiction tab in results for film titles. Troublingly, some of the most explicit content was surfaced when searching for children’s movies. Google Frozen, and users could find pages like “More Than Just Sisters” near the top of the suggested subtopic, a story that (graphically) describes “Elsa and Anna’s secret relationship.” For some films, such as Minions, these fan fiction results included preview images that, while not explicit, certainly weren’t safe for playtime. 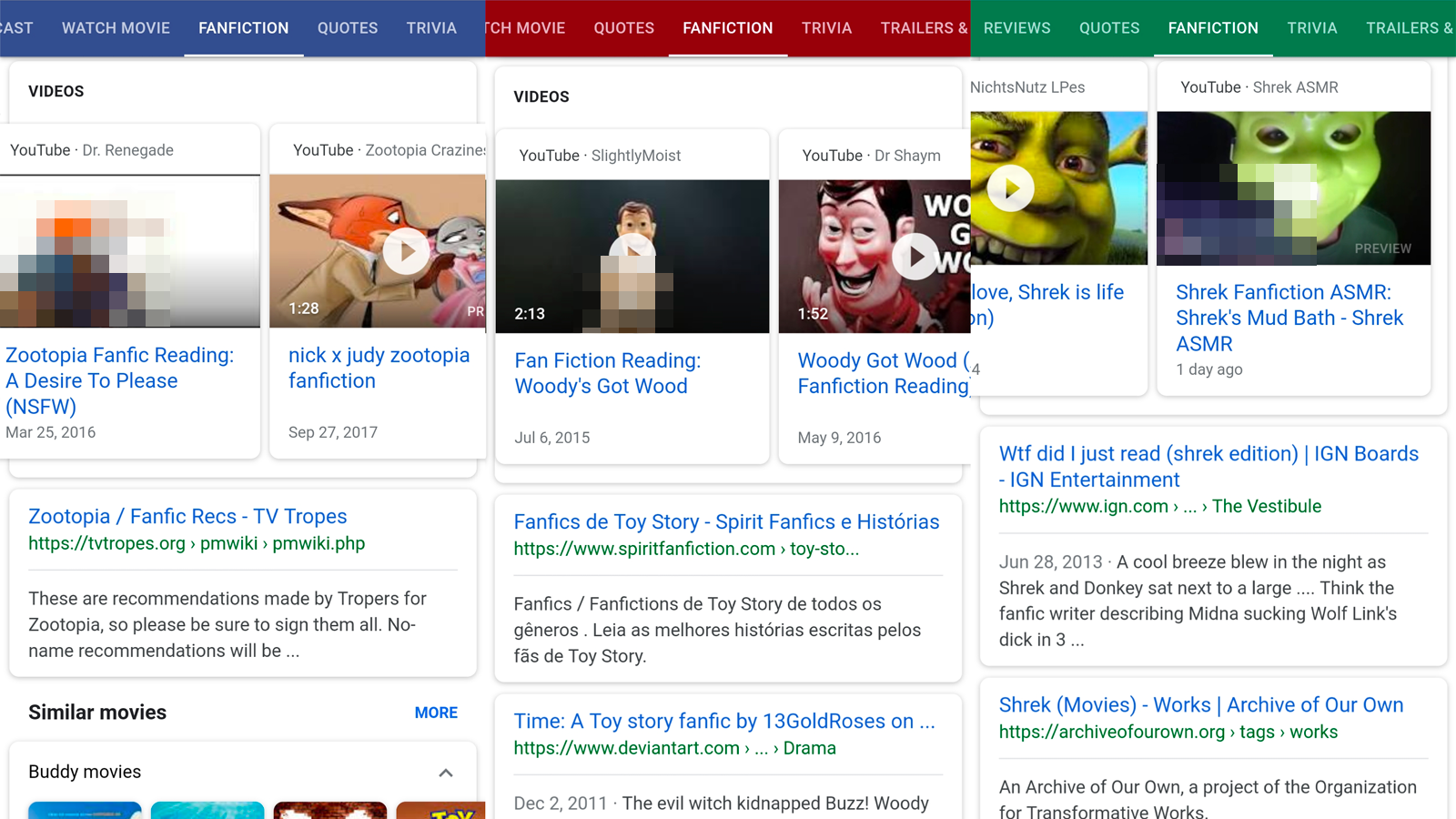 We reached out to Google, sending them examples of The Grinch, Minions, and Frozen erotica found under the suggested fan fiction subtopic. In response, the company told us that it was “temporarily removing” the fan fiction tab for films, TV shows, and books.

“The subtopics that appear for film and TV show search results are automatically generated based on popular searches and our systematic understanding of content on the web that is relevant to the topic,” said a Google spokesperson in a statement. “In this case, we recognise that the subtopic of fan fiction, while relevant to many users and not inherently offensive or inappropriate, could inadvertently point people to content they may find objectionable.”

When asked if the company had a mechanism to filter adult content from tabs related to children’s topics, the spokesperson said that inappropriate subtopics are prevented from appearing in searches, but fan fiction (which isn’t intrinsically sexual) was not.

When it comes to finding the most relevant information about broad topics or specific questions, Google is an invaluable tool. But in the end, it’s probably not the smartest idea to have a robot decide what people are really asking when they search for “Minions.”