The stereotype of a typical Neanderthal life is that it was extraordinarily difficult, violent, and traumatic. But a comparative analysis of the remains left behind by Neanderthals and contemporaneous humans is finally overturning this unwarranted assumption.

Decades ago, Neanderthals were depicted as club-carrying, dim-witted brutes who spent their days clobbering each other with reckless abandon. The modern vision of Neanderthals, while vastly improved, continues to perpetuate the idea that these now-extinct hominids lead dangerous and violent lives—an assumption based on early descriptions of individual skeletons. This idea, that Neanderthals led brutal lives, was largely predicated on injuries observed in the bones and skulls left behind by Neanderthals. When comparing trauma in Neanderthals to those seen in anatomically modern humans, scientists observed higher levels of head and neck injuries in Neanderthals, which was attributed to their lifestyle.

Neanderthals, it was argued, engaged in violent social behaviour; lived a mobile hunter-gatherer lifestyle in perilous Ice Age environments where opportunities for accidents were in steady supply; were prone to attacks by dangerous carnivores such as bears and cave hyenas; and, as hunters, relied on close-range weapons—such as stabbing implements and thrusting spears—to subdue their prey, which required them to come into close contact with large animals.

Katerina Harvati, the lead author of the new study and an archaeologist at the University of Tübingen in Germany, said these earlier studies were based on a descriptive approach, focusing on just injured individuals and evaluating trauma patterns across skeletons rather than injury rates. Recent efforts have tried to be more systematic and quantitative in their approach, but Harvati said these studies were limited in scope and thus inconclusive. 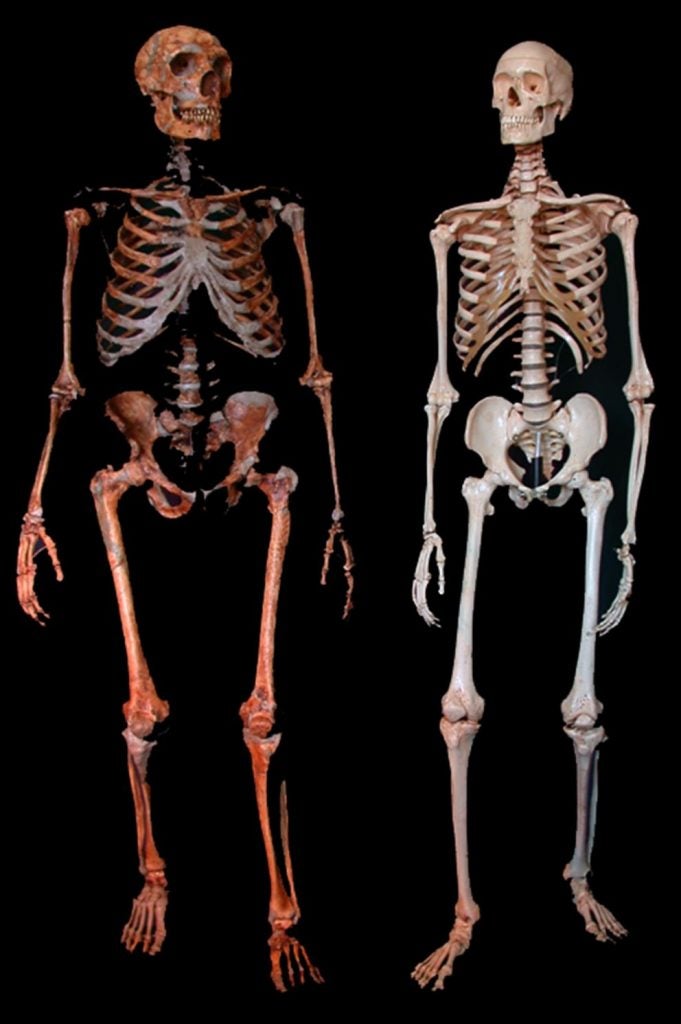 “Our study is the first to address the question of population-level rates of head injuries in Neanderthals and Upper Paleolithic Europeans by examining both injured and non-injured individuals, and using the largest dataset currently available that we compiled from the literature,” Harvati explained to Gizmodo. “We used sophisticated statistical modelling, taking into account preservation bias and other factors. As such our study is the first that addresses the question of head injury rates in Neanderthal and Upper Paleolithic modern human populations.”

The dataset Harvati is referring to contains over 800 specimens collected throughout western Eurasia and dated to between 80,000 and 20,000 years ago. Neanderthals lived in Eurasia from around 400,000 to 40,000 years ago, and modern humans joined them there starting around 175,000 years ago. As noted, these samples represent a cross-section of Neanderthals and Upper Paleolithic humans, some with injuries and some without. Cranial injuries are relatively easy to detect on skulls; they’re very obvious in fatal cases, featuring massive cracks or holes, but skulls can also show signs of healing, leaving visible lesions after a full recovery.

For the study, the University of Tübingen researchers documented incidents of skull trauma, sex, age at death, degree of skeleton preservation, and the geographical location of each sample. Frequency of head trauma was evaluated for the two groups. In total, 836 cranial elements were analysed from 204 individuals. Looking at the data, no differences could be detected in the injury rates between Neanderthals and contemporaneous humans.

“What we know now that we did not know before is that the prevalence of cranial injury at the population level is comparable between ‘classic’ Neanderthals and early Upper Paleolithic modern humans, suggesting that Neanderthal lives were not more dangerous than those of the latter group,” Harvati told Gizmodo. “This has potential implications for previous hypotheses about Neanderthal behaviour developed on the basis of the assumption of high levels of Neanderthal trauma, such as those regarding dangerous hunting practices or high levels of interpersonal violence.”

Diving deeper into the data, the researchers noticed that males of both groups exhibited higher frequencies of injuries than females—a likely consequence of sex-specific behaviours and activities.

Fascinatingly, however, higher rates of skull trauma were observed among young Neanderthal skeletons, as contrasted with humans who exhibited consistent head injury rates across age groups. Neanderthals may have sustained cranial injuries earlier in life than Upper Paleolithic humans, and/or Neanderthals were were at an elevated risk of mortality after surviving head injuries as compared to Upper Paleolithic modern humans.

“The latter scenario could imply differences in how the two groups cared for the injured, which may have led to better long-term survival of the trauma survivors among Upper Paleolithic modern humans relative to Neanderthals,” said Harvati. “However, this hypothesis is preliminary and should be further tested with additional analyses.”

Indeed, we have no reason to believe that the level of healthcare provided by Neanderthals was in any way deficient compared to the care provided by H. sapiens. Studies have shown that Neanderthals cared for their sick and wounded, often using sophisticated medical techniques and social support. Another possible explanation (one not considered in the new study) is that, because Neanderthals took longer to mature than humans, and because they experienced a longer juvenile period, they were exposed to higher risk of injuries. But that’s just speculation; as Harvati points out, more research is needed to better understand this peculiar finding.

In terms of limitations, Harvati’s team only considered skulls, and did not look at the rest of the skeletons.

“It is conceivable that we could obtain different results from the rest of the skeleton, though given our current results, I would start with the hypothesis that the rest of the body also showed similar levels of trauma,” said Harvati.

Another possible limitation is that the data analysed came directly from existing literature. In other, words, the researchers didn’t examine the specimens themselves. To that point, Harvati said her team’s approach required the inclusion of both injured and non-injured individuals within the population, so a large number of specimens had to be included. It “would have been practically impossible to examine [all the specimens] in person, particularly as they span a vast geographic area,” she said.

As a final note, we asked Professor Harvati to explain the artwork (the depiction of Neanderthal hunters, shown above) supplied with the study’s press materials, which was created by artist Gleiver Prieto.

“This is an image I commissioned to illustrate previous ideas about dangerous Neanderthal lives,” she said. “This particular image illustrates the idea that Neanderthals hunted large Pleistocene animals at close range, using thrusting spears. This hypothesis was developed in part on previously described high rates of Neanderthal head trauma, which our work did not support.”

Another study, another myth dispelled about the Neanderthals. As we’re increasingly learning, Neanderthals were very much like modern humans—yet they went extinct and we lived on. The reasons for this are still unclear and all the more troubling, given just how similar we were to our hominid cousins. The reason for Neanderthal extinction continues to be one of the more fascinating unanswered questions in archaeology. [Nature]